RCEP Agreement: Another Wake-up Call for the United States on Trade 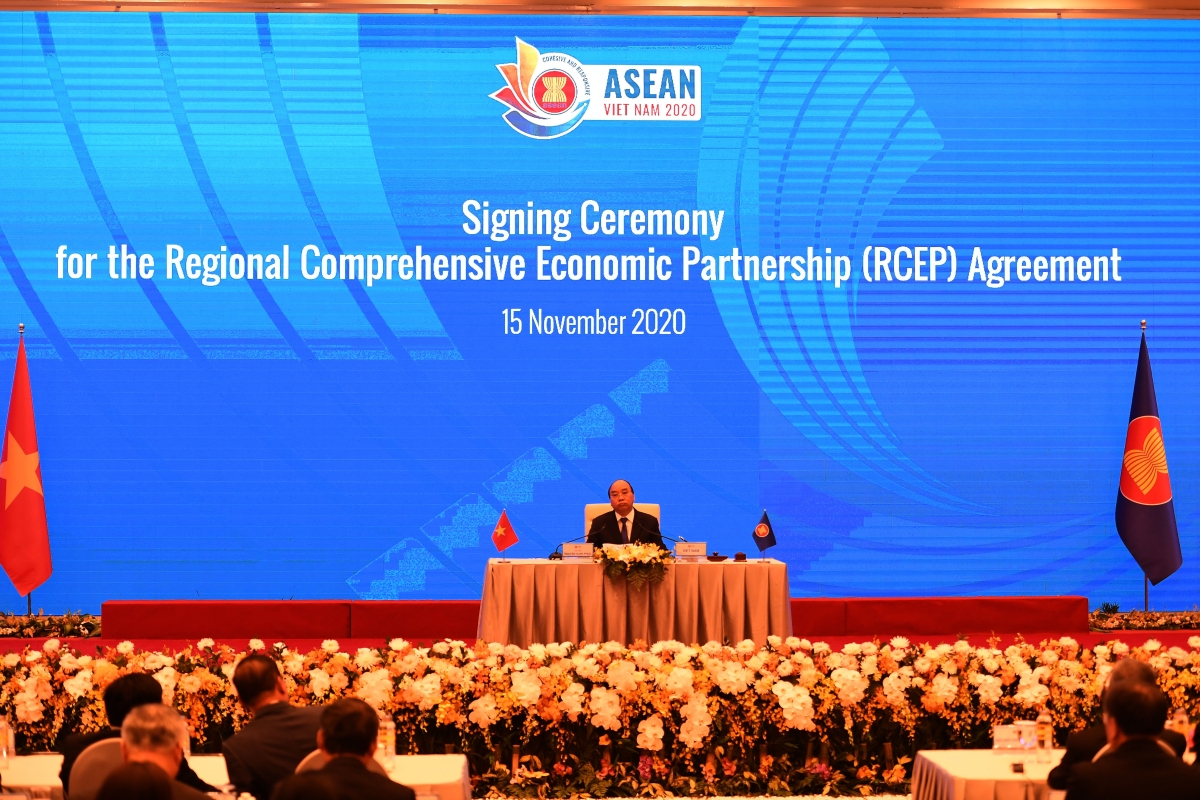 As the United States has largely retreated from economic engagement in Asia over the past four years, on Sunday fifteen countries in the Asia-Pacific region, including China, Japan, and ASEAN members, signed a major new trade agreement, the Regional Comprehensive Economic Partnership (RCEP), which covers thirty percent of global GDP. It’s a fitting bookend to the first APEC meeting that President Trump attended in November 2017 in Vietnam, when he blamed past U.S. Administrations for letting other countries take advantage of the U.S. on trade. Meanwhile, during those same sessions, leaders from the 11 TPP member countries laid the critical groundwork for finalizing the CPTPP agreement several months later.

The RCEP negotiations were grueling. They went on for eight long years with many ups and downs. Most notably, RCEP members were confronted with a body blow at this time last year when India withdrew from the negotiations. While India’s exit was not a welcome move, in many respects it made the deal easier to conclude because New Delhi was blocking progress on many important issues, including market access, intellectual property protection, and investment.

Beijing will likely claim victory upon the signing. It has been a promoter of RCEP since day one. Then, as the U.S. retreated from the regional stage and pursued a trade policy based on unilateralism, Chinese leaders used that vacuum to portray Beijing as the reliable partner of choice for economic growth, trade, and investment. But to describe RCEP as a China-led trade initiative misses broader trends in Asia, where countries are focused on diversifying trading partners, solidifying supply chains, and achieving economic and job growth through trade agreements.

India’s exit was not the sole factor that spurred the fifteen remaining countries to conclude their work. There were two other reasons. First, negotiating fatigue set in. At some point in every negotiation, the participants must make a decision on whether to take the final leap to conclusion or put the talks in a holding pattern until conditions more conducive to success emerge. Moreover, overt disregard for the rules-based trading system by the Trump Administration likely spurred others into action. By signing the RCEP agreement, the member countries made a forceful statement in favor of trade liberalization, open markets, and the importance of rules to govern flows of goods and services.

Based on comments made to date, the rules and market access commitments are expected to be significantly weaker than those in CPTPP. It will be tempting to focus on product exclusions and a lot of “shoulds” rather than “shalls.” This will undoubtedly lead some to quickly dismiss the initiative. That would be a mistake.  As the text and market access commitments are reviewed, it’s important to compare them to existing WTO rules and free trade agreements already in place between the Parties on a bilateral or ASEAN-wide basis. In doing so, there will likely be some pleasant surprises, particularly on the rules side, in such areas as intellectual property protection and e-commerce. Additionally, we need to keep in mind that the current agreement won’t be the last word.  ASEAN- based pacts typically call for improvements over time, making them “living agreements.”

Furthermore, trade agreements, especially those concluded between multiple parties, are not just about tangible market access benefits and the wording of rules provisions. RCEP promotes the further integration of the member economies through common rules and lower tariff rates.  It solidifies bonds between trade negotiators and ministers, from Beijing to Jakarta to Wellington, which will carry over to other fora and initiatives. And we can also expect geopolitical impacts as the fifteen countries chose to join hands under the RCEP framework regardless of their differences and their disputes with other parties in the region.

Finally, RCEP is another reminder that our Asian trading partners have developed a confidence about working together without the United States. This is a far cry from the early days of the Trump Administration when the remaining TPP members were doubtful of their ability to go forward without Washington.

President-elect Biden has emphasized the importance he will attach to working with allies and partners and through international institutions to achieve policy objectives, rather than to rely on the kind of aggressive unilateralism that has characterized the Trump presidency.  As the Biden team re-engages globally it will find a different Asia than that of four years ago. This is most evident on trade, where RCEP now joins CPTPP as two major regional trade agreements concluded since 2015. U.S. re-engagement in Asia will require recognition and appreciation of, and respect for, these changes before the United States puts new ideas and initiatives on the table.