Moving Forward at the WTO 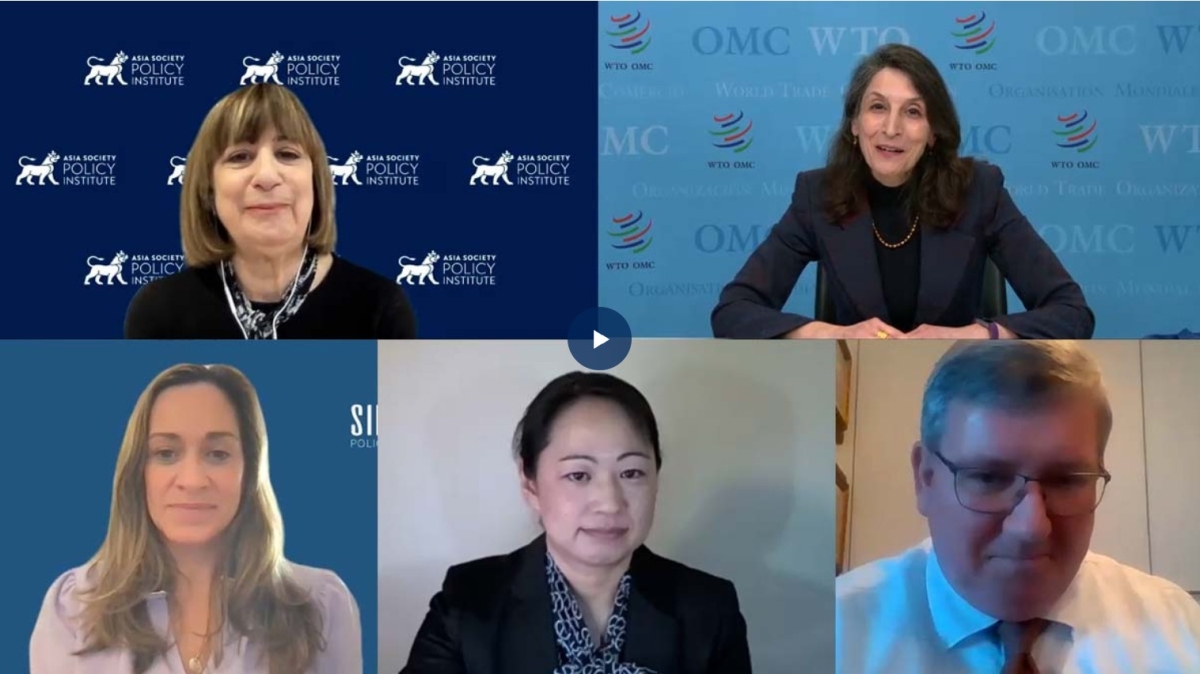 WASHINGTON, D.C.—When the World Trade Organization (WTO) 12th Ministerial Conference (MC-12) was postponed due to the Omicron outbreak late last year, Director General Ngozi Okonjo-Iweala stressed that urgent negotiating work must continue, saying “delegations in Geneva should be fully empowered to close as many gaps as possible.”  Pressing matters on the MC-12 agenda included issues related to pandemic recovery, fish subsidies, non-market economies, agriculture, e-commerce, and sustainable trade. Making headway is critical to getting the WTO back on track and showing the world that it can still get things done.

To examine prospects for progress, ASPI convened a public event, Charting a Path Forward at the WTO: Determining Next Steps on January 25th featuring ASPI Vice President Wendy Cutler and Angela Ellard, Deputy Director-General at the World Trade Organization (WTO); followed by a panel with Simon Evenett, Professor of International Trade and Economic Development at the University of St. Gallen; Yuka Fukunaga, Professor at Waseda University; and Sarah Stewart, Executive Director of the Silverado Policy Accelerator.

The following questions were discussed:

The panel event explored: (1) the overall impact of the postponement of MC-12 on progress at the WTO; and (2) the opportunities and challenges for making substantive progress and reaching tangible outcomes in key issue areas ahead of a delayed Ministerial.

Impact of Postponement of MC-12

Despite the disappointment and challenges caused by the delay of the Ministerial meeting, WTO Deputy Director-General Angela Ellard said there was “very strong momentum” among members to “accomplish as much as possible and tee-up issues to consider for reform,” noting ongoing and intensive consultations on specific issues between members and the Chair of General Council.  She highlighted recent successes, including the conclusion of negotiations on services domestic regulations, the development of a joint declaration advancing gender equality and women’s economic empowerment, and the announcement of three new initiatives on the environment. Ellard noted that, although members have made tremendous progress in negotiations, significant challenges persist and the stakes remain high. According to some panelists, the successful conclusion of key negotiations is critical to showing the world that the WTO can get things done. In particular, Wendy Cutler, ASPI Vice President, characterized the long-running fish subsidies negotiations as a “litmus test for the WTO,” adding that failure at this point, “wouldn’t speak well for the organization.”

In light of this, panelists suggested that the WTO modify its approach to negotiations. Simon Evenett, Professor of International Trade and Economic Development at the University of St. Gallen, recommended moving away from rounds of comprehensive negotiations and viewing issue areas as separate tracks, saying, “If we see progress this year at the WTO it will be because these issues were dealt with one at a time.” Sarah Stewart, Executive Director of the Silverado Policy Accelerator, emphasized that plurilateral negotiations on an MFN basis could be better leveraged to facilitate progress. Yuka Fukunaga, Professor at Waseda University, added that where issues are highly contentious, negotiations may need to be “more flexible and inclusive” to reach an agreement.

According to Ellard, “the first part of any discussion on industrial subsidies is to first figure out what they are and to do the research and get the information.” She noted that the WTO has been leading promising work with the World Bank, OECD, and IMF to quantify and analyze industrial subsidies globally. In line with this aim, Evenett shared some of his own findings, detailed in a recent report. Evenett and colleagues identified 18,000 subsidies implemented by China, the EU, and the United States since the financial crisis of 2008, and found the U.S. and EU reliance on subsidies was roughly on par with that of China.

Recognizing subsidies as a global problem could help “bring China to the table to have a balanced discussion,” Evenett said. Ellard noted renewed willingness among members to discuss subsidies, although they are “coming from different perspectives” and “not necessarily seeing eye-to-eye.” Informal, evidence-driven talks could provide a path forward, she noted. That said, it will ultimately be up to the members to concretely define next steps and determine what informal talks might be needed and in what form they should take place, Ellard concluded.

The co-conveners of the WTO e-commerce negotiations—Australia, Japan, and Singapore—are striving to reach an agreement by the end of 2022. In December 2021, they issued a statement pressing participants to renew the multilateral e-commerce moratorium and broaden engagement with developing and least-developed country (LDC) members. Despite momentum, however, members continue to disagree on cross-border data flows, network neutrality, customs duties on electronic transmissions, and other specifics.

According to Fukunaga, although the digital economy is increasingly crucial for both developed and developing countries, “domestic regulations are highly diverse and member countries can end up taking different positions on contentious issues.” Rather than seeking binding and comprehensive agreements, members should separate out the more contentious issues and consider a more “modular approach,” with incremental negotiations. She cited the Digital Economic Partnership Agreement (DEPA), which could serve as a model for this kind of flexibility. Fukunaga stressed that in the digital trade space, change is rapid, so members cannot afford to take too much time trying to reach agreements. “By nature, any agreement on digital trade needs to be a flexible, living agreement,” she said.

On December 15th, co-sponsors of three new initiatives, the Trade and Environmental Sustainability Structure Discussions (TESSD), the Information Dialogue on Plastics Pollution and Sustainable Plastics Trade (IDP), and Fossil Fuel Subsidy Reform (FFSR) met jointly to agree to advance discussions on sustainable trade. In Stewart’s view, “the fact that these declarations were finalized despite the postponed MC-12 shows there is positive momentum.” But while declarations might signal political will, they aren’t necessarily enforceable. Other challenges include expanding participation without opening the door to members whose “sole purpose is to slow roll or to tank the initiative.”

Regarding Carbon Border Adjustment Mechanism (CBAM), where global harmonization efforts are needed, Stewart advised that proliferating unilateral measures could lead to “retaliation, disputes or trade wars.” She recommended that like-minded countries with high environmental standards come together and create a blueprint that could lead to a larger plurilateral or multilateral initiative. Stewart said members engaged with the WTO’s new environmental initiatives could help to facilitate such gradual consensus-building. They could also work to update and modernize the concept of what constitutes an environmental good, potentially enabling a restart of the Environmental Goods Agreement discussions, which fell apart in 2016.

The WTO’s ongoing pandemic response work is largely focused on two broad issues: 1) a potential waiver of Trade-Related Aspects of Intellectual Property Rights (TRIPS) for COVID vaccines and related medical products, and 2) the trade response to the pandemic. While the first issue remains deeply divisive, some progress has been made on the second front, although differences in approach and content remain. Ellard said the WTO’s research to better understand supply chain bottlenecks and the impact of various policy choices, including tariffs, on vaccine manufacturing has been useful for policymakers. “What we’ve seen,” Ellard said, “is that over the months, countries have been adopting more trade facilitation measures, and some of them are having second thoughts about some of the barriers that have been imposed.” According to Evenett, while member countries have implemented more than 200 liberalizing measures since the start of the pandemic, restrictions on export of medical goods continue to create impediments, and there has been no net reduction of such export restrictions in the past year.

Now, more than ever, the WTO needs to deliver results to remain relevant, yet there are no simple, quick solutions for many of the complex issues members are attempting to negotiate. Despite the postponement of MC-12, Ellard noted that members have managed to forge ahead with serious work to address a variety of pressing matters. Panelists agreed that this offers some reason for measured optimism. 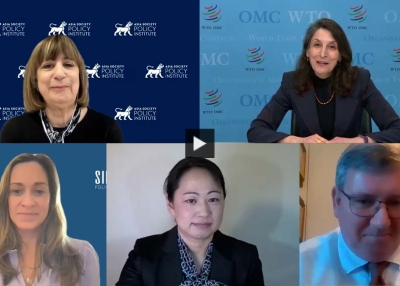 Charting a Path Forward at the WTO: Determining Next Steps