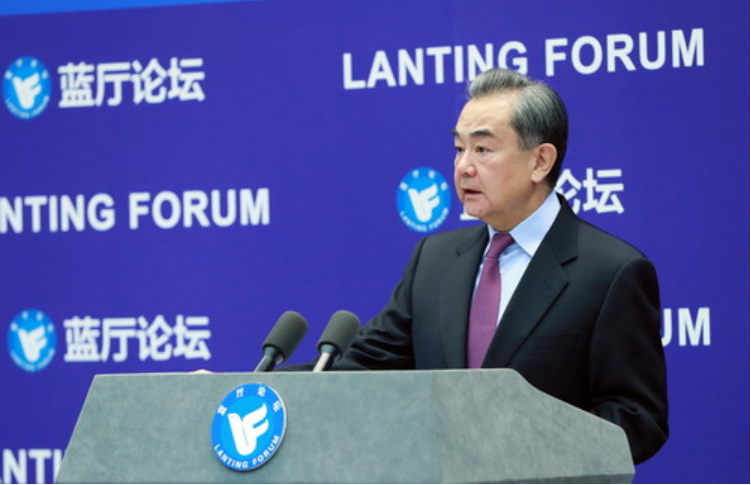 (Ministry of Foreign Affairs, The People's Republic of China)

Thank you for inviting me to deliver some remarks today.

This year’s Lanting Forum’s theme is ”Promoting Dialogue and Cooperation and Managing Differences,” and I trust all here wish to see the U.S.-China relationship get to a stable track.

Honest speaking, in this decade, U.S.-China strategic competition is inevitable, although a war between U.S.-China can be avoided.

My understanding is: under a set of mutually agreed rules, may the better one prevail in a competition. So I propose a concept of “managed strategic competition.”

State Councilor Wang has said during a recent event at Asia Society, that the U.S.-China relationship is facing “the most serious challenges since the establishment of diplomatic
relations.” I believe that is a correct assessment.

Everything points to the years ahead over the 2020s as being a make or break decade for China and the United States, and for their relationship with each other.

These are the years in which China aims to “move closer to center stage” in the world, as President Xi put it in 2017, and take up greater global leadership as a major power.

These are the years in which China is most likely to pass the United States as the world’s largest economy by market exchange rates, and will seek to achieve a leading role in
technological innovation.

These are also the years in which the United States, under the Biden administration, will seek to retain its leading position across all crucial domains – economic, technological, military, etc. – by engaging in what President Biden recently described as “extreme competition.”

The contest between the two countries will therefore enter a decisive phase in the 2020s, driven by inexorable Thucydidean logic. This will be the decade of living dangerously for us all.

No matter what stratagems the two sides pursue or what events unfold, the tension between the United States and China will grow, and competition will intensify; it is inevitable.

War, however, is not inevitable.

The idea of managed strategic competition is anchored in a deeply realist view of the global order. It accepts that states will continue to seek security by building a balance of power in their favor while recognizing that in doing so they are likely to create security dilemmas for other states whose fundamental interests may be disadvantaged by their actions.

The trick, in this case, is to reduce the risk to both sides as the competition between them unfolds by jointly crafting a limited number of rules of the road that will help prevent conflict.

In this, the two countries need to draw lessons from the procedures and mechanisms that the United States and the Soviet Union put in place to govern their relations after the Cuban missile crisis — but in this case, without first going through the near-death experience of a barely avoided war.

First, the U.S. and China would need to jointly establish certain hard limits on each country’s security policies and conduct (and that of their allies) in order to manage the escalation of competition into conflict over existential issues.

For example, the “One China” policy as articulated in the Joint Communiques, is critical. Ending the Trump administration’s unnecessarily provocative actions will be important. For its part, Beijing should dial back the recent pattern of its own military exercises, deployments, and maneuvers in the Taiwan Strait.

Second, if both sides could agree on a series of such stipulations, each would then have to accept that the other will still try to maximize its advantages while stopping short of breaching the strategic limits of the relationship. Washington and Beijing would continue their competition for strategic and economic influence - bilaterally, multilaterally, and across the various regions of the world. This is the new reality.

They would keep seeking reciprocal access to each other’s markets and would still take retaliatory measures when such access was denied. They would still compete in foreign investment markets, technology markets, capital markets, and currency markets. And they would likely carry out a global contest for hearts and minds, each aiming to demonstrate that their system of development and governance is the best available.

But this competition would be bounded.

Finally, even amid escalating competition, the two countries will have to find room for continued strategic cooperation on critical global challenges in a number of defined areas. This occurred even between the United States and the Soviet Union at the height of the Cold War. It should certainly be possible now between the United States and China, when the immediate military stakes may not be nearly as high, but where global challenges are increasingly pressing.

Climate change, combatting the pandemic and improving public health, global economic recovery, and financial stability, and nuclear arms control including limitations on AI warfare are examples of where cooperation will be necessary, not just for the world’s interests, but to secure each other’s national interests as well.

State Councillor Wang in the past has proposed something similar, “the Three Lists”. I believe that the time is right for a concept of Managed Strategic Competition to be analyzed by both sides as a matter of urgency. The alternative is unmanaged strategic competition with all the risks that now entails.

There will be many who will criticize this approach as naive. Others will say it is too limited. Their responsibility, however, is then to come up with something better.

Both the United States and China are currently in search of a formula to manage their relationship for the dangerous decade ahead. The hard truth is that no relationship can ever be managed unless there is a basic agreement between the parties on the terms of that management.

Although a framework of Managed Strategic Competition would be difficult to construct, doing so is still possible — and the alternatives course well be catastrophic.

As Dr. Henry Kissinger once said during the Cold War: “We know what we must do. We also know what we can do. It only remains to do it.”