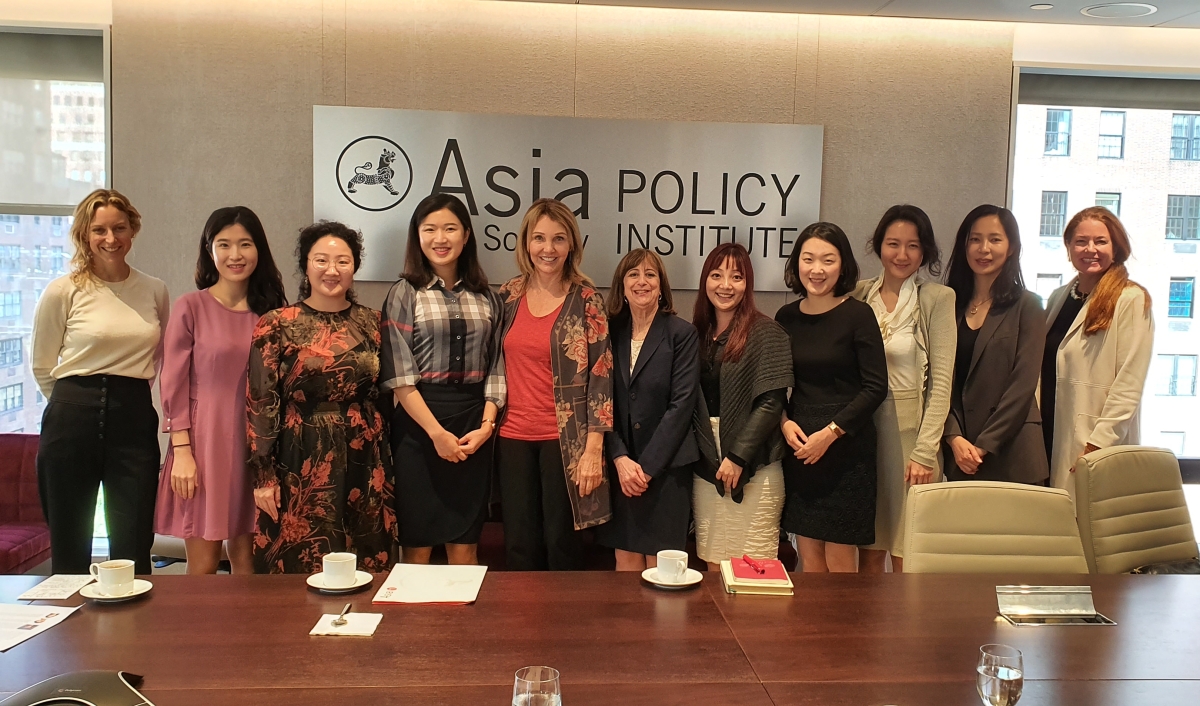 Members of the 2019 Emerging Leaders class with Asia Society staff

The Asia Society Policy Institute's Emerging Female Leaders program offers the opportunity for female professionals from the Republic of Korea with interest and experience in international trade to participate in an intensive 10-day long program in the United States featuring workshops, briefings, and capacity-building exercises in Washington, D.C., New York City, and San Francisco. The program focuses on developing skills and competencies for trade negotiations and working in the trade field more broadly. It seeks to deepen understanding of trade negotiations and policymaking, while providing mentorship and guidance for women’s empowerment in the workplace.

The inaugural program took place in Fall 2019 and included meetings with current and former U.S. officials; trade experts; and female leaders in finance, the media, and tech sectors.. The Asia Society Policy Institute (ASPI) was pleased to host the inaugural cohort of the Emerging Female Leaders program from September 30 to October 9, 2019. The first class of this program included:

For the first leg of the program, the Emerging Female Leaders traveled to Washington, D.C. from Seoul to partake in sessions with former and current officials in the U.S. government and trade experts in the private sector. During these sessions, the group developed their understanding of international trade negotiations and the trade policy process in the United States, as well as examining the roles of Congress, the media, stakeholders, and foreign policy in international trade.

In Washington, D.C., the group met with, among others, former U.S. Ambassador to Korea Mark Lippert and special envoy to North Korea Joe Yun; Angela Ellard, trade counsel for the Committee on Ways & Means Committee and a 20+ year career expert on legislative trade policy; and a number of former officials from the Office of The United States Trade Representative (USTR) who now hold in senior positions in the private sector, including at Amazon, UPS, Ernst and Young, and Pfizer.

ASPI also partnered with the Korea Economic Institute and the Association of Women in International Trade to hold networking receptions with the trade and foreign policy community in D.C., which included remarks by Ambassador Kathleen Stephens and Tami Overby.

Following Washington, D.C., the group traveled to New York, where they visited the Asia Society headquarters and met with prominent women in media and business. During these sessions, the group shared experiences with successful women and learned strategies for overcoming obstacles to advancing in the workplace, including how to ensure that their voices are heard among their male peers, how to form and take advantage of networks, and how to balance their work/life demands.

The group toured ABC studios and met with Korean-American T.V. anchor Juju Chang, as well as Shery Ahn from Bloomberg. The group also met with Ambassador Cho Tae-yul, Korea’s Permanent Representative to the UN, and was hosted for dinner by Korean Consul General Hyo-Sung Park. The group also was hosted for breakfast by Asia Society President Josette Sheeran, as well as by Asia Society Trustees Frank Brown of General Atlantic and Lulu C. Wang of Tupelo Capital who hosted separate lunches for the group.

From the private sector, the group also met with a group of senior female Blackstone Executives, who are part of the firm's Blackstone Women initiative, as well as with Claire Chino, Managing Executive Officer of ITOCHU Corporation and the youngest and the first female executive officer of any major Japanese trading company as well as a fellow in the Asia Society's "Asia 21 Young Leaders" Initiative.

After spending the weekend in New York, the group flew to San Francisco for the final leg of the trip. With the support of Asia Society Northern California (ASNC) Executive Director Margaret Conley and her staff, the group had a number of excellent meetings including with Lia Theodosiou-Pisanelli of Aurora, James Green of McLarty Associates, and Adama Iwu of Visa. The group attended a panel on succeeding in the tech sector with ASNC Trustee Jaleh Daie and Anita Sands, who sits on the boards of Symantec, Pure Storage, and Service Now, moderated by Gina Chon of Thompson Reuters.

The group also took a trip to Silicon Valley to visit IBM's Research Center, where the 2019 class met with top female scientists and researchers, including Wendy Belluomini, as well as a tour of Google's Campus in Mountain View where they met with a group of prominent Korean-Americans, including Jan Kang, Chief Legal Officer at Chronicle, and Salle Yoo, who was Uber's Chief Legal Officer. At Google, the group also met with Karan Bhatia, formerly Deputy USTR and now Google's Vice President of Public Policy & Government Affairs.