[WEBCAST] The Impact of Coronavirus on Iran's Politics, Economy, and Foreign Policy 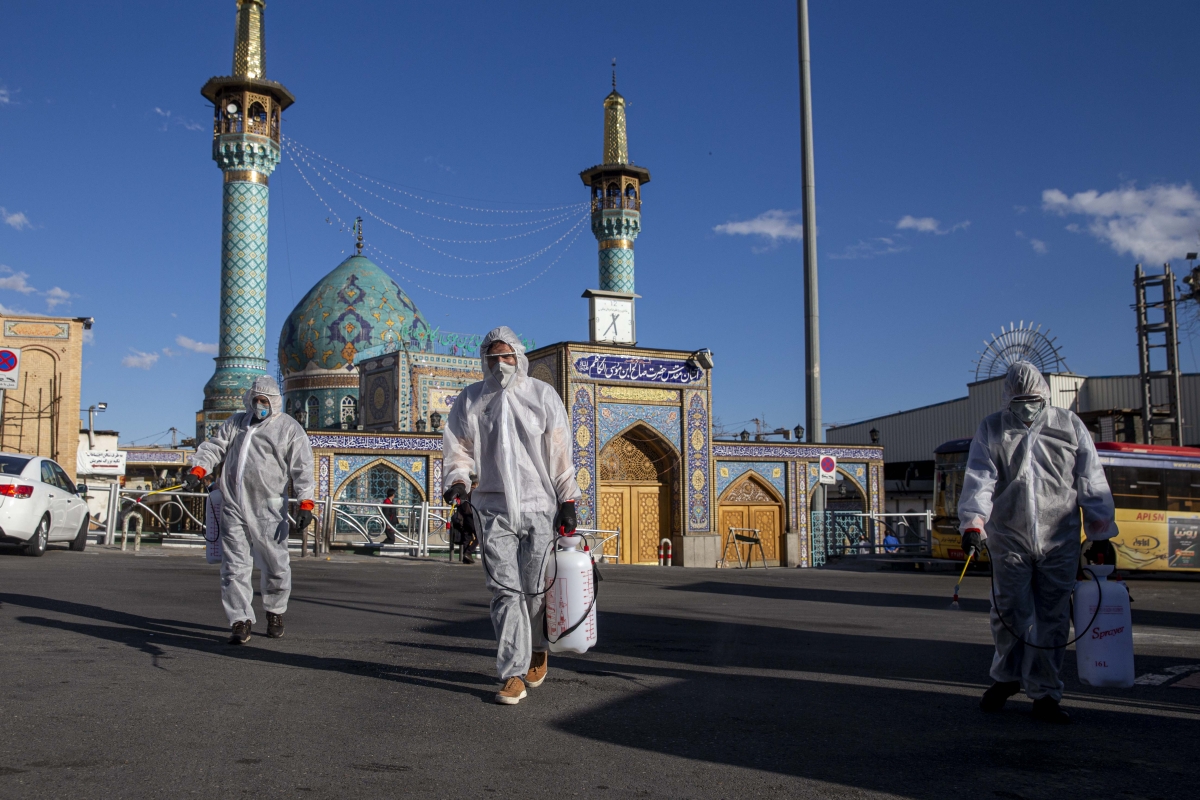 Volunteers spray disinfectant at Tajrish bazaar in the Northern part of the city during the coronavirus pandemic on March 31, 2020, in Tehran, Iran. Iran is battling the worst outbreak of coronavirus (COVID-19) in the region with over 44,606 reported cases. (Majid Saeedi/Getty Images)

This is the sixth in a series of webcast events by the Asia Society Policy Institute (ASPI) entitled “Coronavirus, Asia, and the World.” Throughout the coming weeks, ASPI will be presenting web-only programs every Tuesday and Thursday to analyze the scope of the ramifications from the novel coronavirus across the Asia-Pacific region and the world. All events will be live-streamed on YouTube and Facebook. For information about future events in this series and for ASPI’s additional coronavirus content see here.

Iran has been one of the countries hardest hit by the novel Coronavirus and has recorded the largest number of infections in the Middle East. U.S. sanctions and the collapse of oil prices have only contributed to a severe economic crisis. The government is facing a tough political moment as well, experiencing widespread political protests since last Fall and having just held parliamentary elections in February. Amidst these troubling developments, the risk of conflict with the United States has also grown as tensions mount over Iran’s regional activities and its nuclear program.

Ali Vaez is Crisis Group's Iran Project Director. Consulting closely with all sides in the nuclear negotiations for the past few years as our former Iran Senior Analyst, he led Crisis Group’s efforts in helping to bridge the gaps between Iran and the P5+1 and is renowned as one of the foremost experts on Iran’s nuclear and missile programs. Before joining Crisis Group, he headed the Iran project at the Federation of American Scientists in Washington, DC. Trained as a scientist, Vaez has more than a decade of experience in journalism. He has written widely on Iranian affairs and is a regular contributor to mainstream media outlets. He was a post-doctoral fellow at Harvard University from 2008 to 2010 and holds a Ph.D. from the University of Geneva and a master's degree from the Johns Hopkins School of Advanced International Studies. He is an adjunct professor at Georgetown University's School of Foreign Service.

Kamiar Alaei, MD,DrPH (left) and Arash Alaei, MD (right) are global health policy experts who have been working in conservative social settings for two decades. They are the co-President of the Institute for International Health and Education working in several countries in the Middle East and Central Asia. They co-founded the first ‘Triangular Clinic’ for three target groups in Iran (drug users, HIV patients, and STD cases), documented by the World Health Organization as a ‘Best Practice Model’. In recognition of their work, Drs. Alaei were awarded the Jonathan Mann for Global Health and Human Rights by the Global Health Council, World Health Organization/PAHO Award Health and Human Rights, Inaugural Elizabeth Taylor Award sponsored by the International AIDS Society and amfAR, the Foundation for AIDS Research in recognition of efforts to advocate for human rights in the field of HIV, and the Heinz R. Pagels Award for human rights by the New York Academy of Sciences.

Puneet Talwar (moderator) is a Senior Fellow with the Asia Society Policy Institute in Washington, DC. He has held high-level national security and foreign policy positions at the White House, State Department, and U.S. Congress. Mr. Talwar is a former Assistant Secretary of State for Political-Military Affairs (2014 to 2015) and a former Special Assistant to the President and Senior Director at the National Security Council for the Gulf States, Iran, and Iraq (2009 to 2014). He played a central role in the backchannel diplomacy that produced the Iran nuclear deal. Prior to working in the White House, Mr. Talwar was a senior member of the Senate Foreign Relations Committee staff for twelve years and a top advisor to then-Senator Joe Biden. He served on the State Department’s Policy Planning Staff from 1999 to 2001 and was a foreign policy advisor in the House of Representatives in the early 1990s.

Viewers can submit questions through comments on those platforms during the live stream.

For event details visit https://asiasociety.org/policy-institute/events/webcast-impact-coronavirus-irans-politics-economy-and-foreign-policy This is a web-only event that will be live-streamed on&nbsp;Facebook&nbsp;and&nbsp;YouTube. Viewers can submit questions through comments on those platforms during the live stream.