Responding to Trade Coercion: A Growing Threat to the Global Trading System

In Partnership with the Perth USAsia Centre 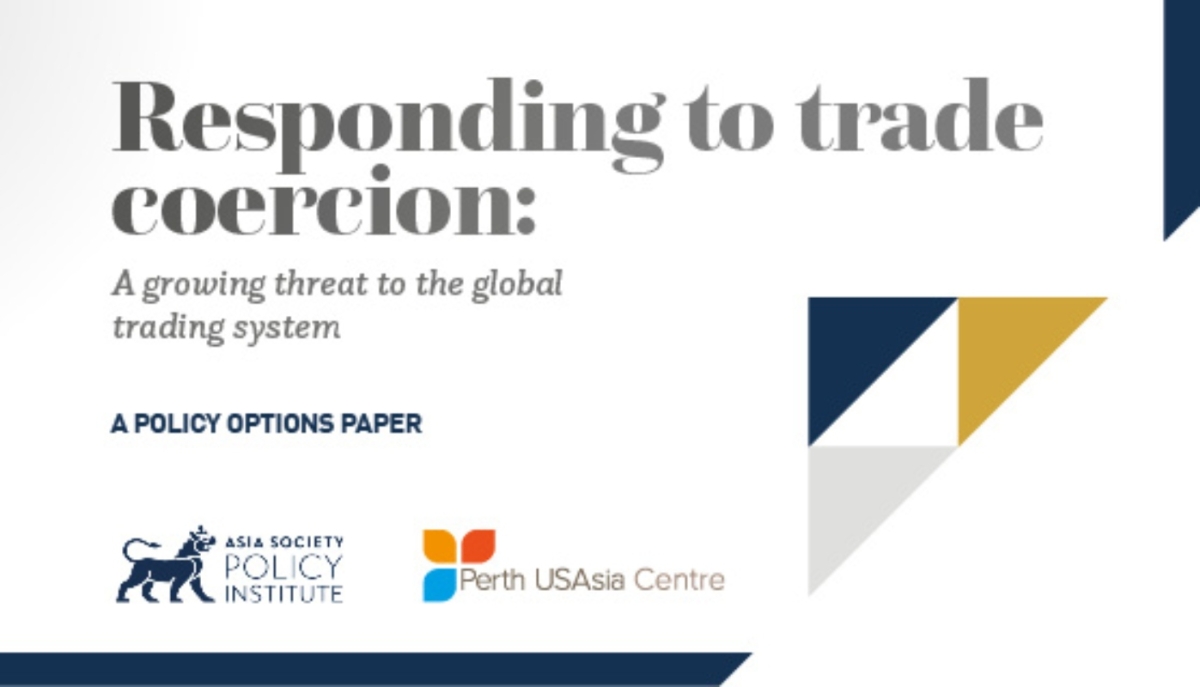 As geopolitical tensions have increased in recent years, international trading relationships have become more politicized. Coercive trade practices – including quotas, anti-dumping measures and/or phyto-sanitary barriers – have emerged as one of the more concerning expressions of this trend. These actions work to harm trade partners economically in effort to apply political pressure as part of a broader diplomatic dispute. This presents a serious threat to the integrity of the rules-based trading system.

Currently, existing trade instruments are unable to adequately address this growing concern. The World Trade Organization (WTO) is slow to respond, in the absence of a functioning appellate body, and coercive trade practices can be difficult to identify and quantify, allowing for many cases to go unreported. It will be critical for governments to find alternative tools for dealing effectively with trade coercion.

On December 7, the Asia Society Policy Institute (ASPI) and the Perth USAsia Centre will be launching a joint report, Responding to Trade Coercion: A Growing Threat to the Global Trading System, which provides a menu of ten effective policy options for governments to consider.

To discuss this topic and specific recommendations in more detail, ASPI and the Perth US Asia Centre will convene a panel of experts to explore the following questions:

Wendy Cutler is Vice President of the Asia Society Policy Institute (ASPI) and Managing Director of its Washington, D.C. Office. In these roles, she focuses on building ASPI’s presence in Washington — strengthening its outreach as a think/do tank — and on leading initiatives that address challenges related to trade and investment, as well as women’s empowerment in Asia. She joined ASPI following nearly three decades as a diplomat and negotiator in the Office of the U.S. Trade Representative. Most recently she served as Acting Deputy U.S. Trade Representative, working on a range of U.S. trade negotiations and initiatives in the Asia-Pacific region.

Dr. Jeffrey Wilson is the Research Director at the Perth USAsia Centre, where he provides leadership and strategic direction in developing the Centre’s research program across its publications, policy, and dialogue activities. Prior to joining the Centre, Jeffrey was an Associate Professor at the Asia Research Centre at Murdoch University. He has particular expertise in the politics of trade agreements, regional economic institutions, and Australia’s economic ties with Asia.

Jonathan Hackenbroich is a Policy Fellow for Economic Statecraft at the European Council on Foreign Relations (ECFR) and the Head of ECFR’s Task Force for Protecting Europe from Economic Coercion, where he focuses on economic coercion and geo-economics, especially sanctions policy. Previously, he was research assistant to ECFR’s director and a lecturer on strategic political forecasting at the Technical University of Dresden.

Ambassador Yoichi Suzuki is a former Japanese official spanning a long and distinguished career at the Ministry of Foreign Affairs. Most recently, he served as the Director-General for Economic Affairs and Chief Negotiator for the EU-Japan Economic Partnership Agreement (EPA). He also served as the Deputy Permanent Representative to the WTO in Geneva as well as Japan’s Ambassador to Singapore and France.