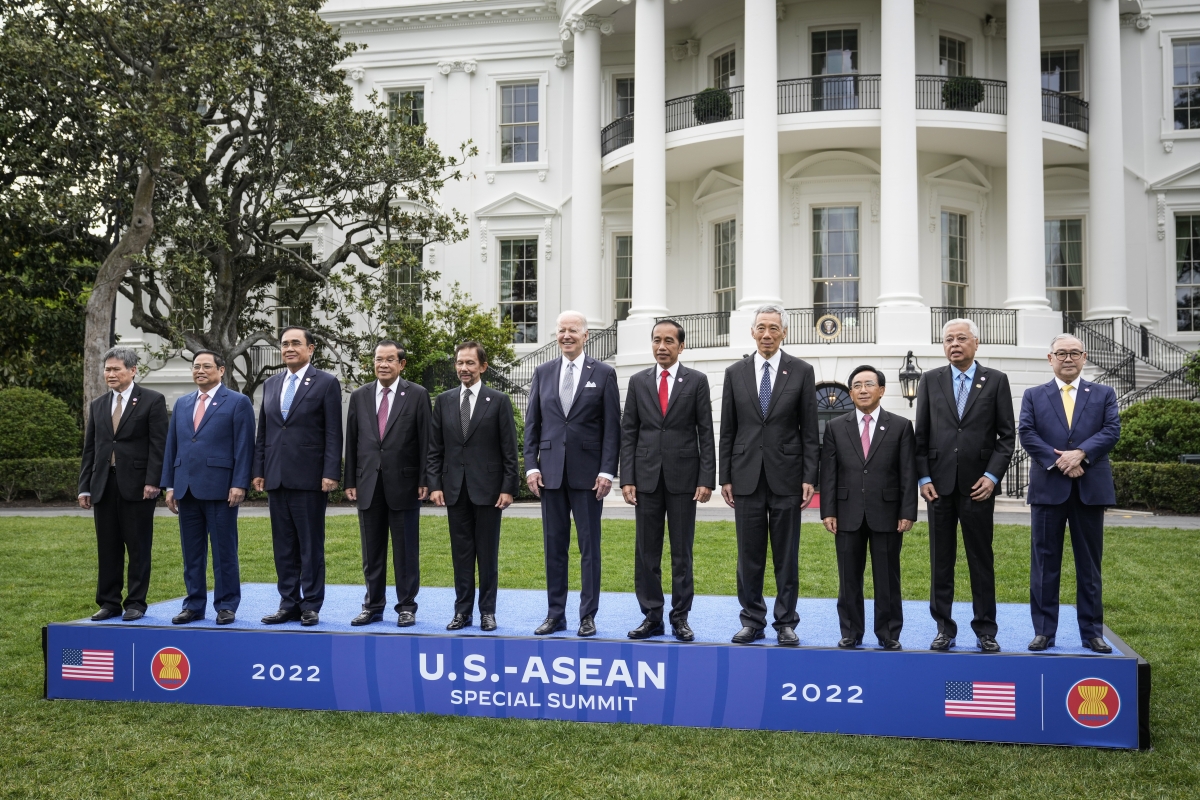 Tune in on May 18, at 9:00 a.m. Washington D.C. time for a free live video webcast. #AsiaSocietyLIVE

After an initial postponement, the much-awaited U.S.-ASEAN Special Summit took place for the first time in Washington, D.C. on May 12-13, marking 45 years of relations between both sides. Leaders met to discuss how to deepen economic, security, and socio-cultural cooperation amid the pressures of COVID-19 recovery, the Myanmar crisis, Russia’s invasion of Ukraine, and major power competition.

What were the expectations going into the Special Summit and were they eventually fulfilled by the meeting’s outcomes? Join Elina Noor, ASPI Director of Political-Security Affairs in conversation with Jung Pak, U.S. Deputy Assistant Secretary of State for Multilateral Affairs and for Global China issues, Shafiah Muhibat, Deputy Executive Director for Research, Center for Strategic and International Studies, Indonesia, and Chheang Vannarith,  President of the Asian Vision Institute, for a full debrief on the U.S.-ASEAN Special Summit as well as its impact and implications for the state of relations between the United States and ASEAN countries.

Dr. Jung H. Pak is a Deputy Assistant Secretary for Multilateral Affairs and for Global China issues. She also serves as Deputy Special Representative for the Democratic People’s Republic of Korea (DPRK). Prior to arriving at State, she was a senior fellow at the Brookings Institution, where she focused on Korean Peninsula issues, East Asia regional dynamics, and transnational threats. While at Brookings, she authored Becoming Kim Jong Un, which has been translated into multiple languages and draws from her deep knowledge and experience as an intelligence officer. Pak has held senior positions at the Central Intelligence Agency and served as the Deputy National Intelligence Officer for Korea at the National Intelligence Council. Before her career in national security, Dr. Pak taught U.S. history at Hunter College in New York City. She received her PhD from Columbia University and studied in South Korea as a Fulbright Scholar. Pak is a graduate of Colgate University, where she is Trustee Emerita and recipient of an honorary doctorate.

Dr. Shafiah F. Muhibat is Deputy Executive Director for Research at the Centre for Strategic and International Studies (CSIS) Indonesia. Previously she was the Head of Department of International Relations (2018-2021) and Deputy Head of Department of Politics and International Relations (2016-2017). Her research interests include issues of regional security in the Indo-Pacific, ASEAN, maritime security, Indonesia’s foreign policy, and development cooperation. In 2017, she joined the S. Rajaratnam School of International Studies (RSIS) Singapore as a Senior Fellow at the Maritime Security Programme for one year. She was the Chief Editor of The Indonesian Quarterly, a quarterly academic journal published by CSIS, from 2013 to 2016; Doctoral Fellow at the Institute for Peace Research and Security Policy in Hamburg, Germany, from 2009 to 2012; and has received various scholarships and research grants, among others from the German Academic Exchange Service, the Managing Global Governance Network, USAID, JICA, and Korea Foundation. She served in the panel of jury for the 2022 and 2021 Adam Malik Award. She earned a masters degree from the London School of Economics and Political Science (LSE) in 2003 and Doctor of Philosophy from the University of Hamburg in 2013.

Dr. Chheang Vannarith is President of the Asian Vision Institute and serves as a public policy analyst and government relations strategist. He has over a decade of experience as a geopolitical and geoeconomic analyst, with a focus on Southeast Asia.  He was honored a Young Global Leader by the World Economic Forum in 2013.  He previously served as Visiting Fellow at ISEAS-Yusof Ishak Institute (2017-2018), China Institute of International Studies (2016), Institute of Developing Economies in Japan (2012), and East-West Center in the United States (2010); Southeast Asia Consultant at The Nippon Foundation in Japan (2016-2018); Adjunct Lecturer at Nanyang Technological University’s School of Social Sciences (2017 – Present); Lecturer of Asia Pacific Studies at the University of Leeds (2013-2016), Executive Director of Cambodian Institute for Cooperation and Peace (2009-2013); Technical Advisor to the Cambodian National Assembly (2011); and Assistant to Cambodia’s Defense Minister (2011-2012).  He received his BA in International Relations from the Diplomatic Academy of Vietnam in 2002, MA in International Relations from the International University of Japan in 2006, and PhD in Asia Pacific Studies from the Ritsumeikan Asia Pacific University in 2009.

Elina Noor (Moderator) is Director, Political-Security Affairs and Deputy Director, Washington, D.C. Office at the Asia Society Policy Institute. A native of Malaysia, Elina’s work focuses on security developments in Southeast Asia as well as global governance and technology. Previously, Elina was Associate Professor at the Daniel K. Inouye Asia-Pacific Center for Security Studies. Prior to that, she was Director, Foreign Policy and Security Studies at the Institute of Strategic and International Studies Malaysia. Elina served on the Global Commission on the Stability of Cyberspace, and is a member of the Christchurch Call Advisory Network. Elina was educated at Oxford University, The London School of Economics and Political Science, and Georgetown University.