The Asia-Pacific Makes the G20 Indispensable in Post-COVID World 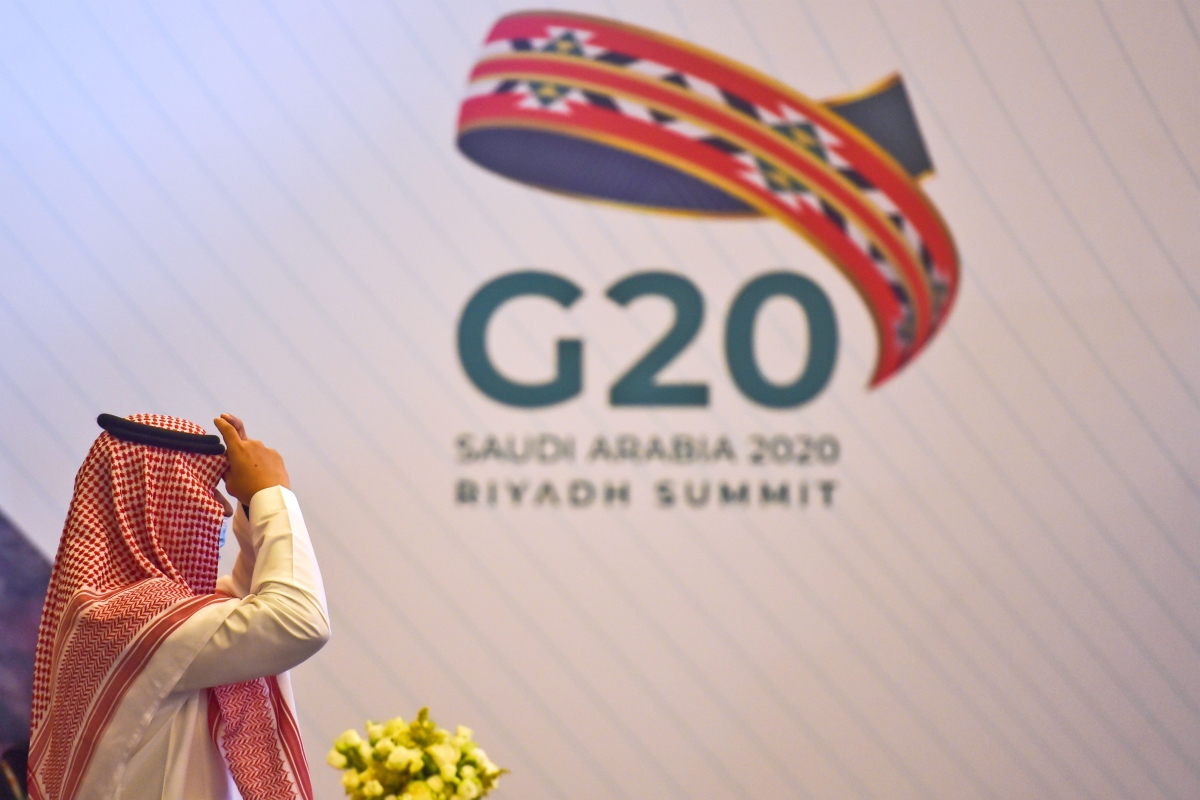 A Saudi man adjusts his headcover ahead of a meeting of Finance ministers and central bank governors of the G20 nations in the Saudi capital Riyadh on November 18, 2020. Saudi Arabia hosts the G20 summit Saturday in a first for an Arab nation, but the scaled-down virtual format could limit debate on a resurgent coronavirus pandemic and crippling economic crisis. (Fayez Nureldine/AFP/Getty Images)

As [two] of the region’s leaders around the G20 decision-making table during the height of the last global recession in 2008 and 2009, we understand the power of the institution in a crisis.

But after four years of the not so subtle degradation of the multilateral order under President Trump, and especially given his proclivity to see G7 and G20 summits as photo shoots for an “America First” foreign policy in action, it is easy to understand why many are ready to give up on the institution — including for having seemingly been missing in action on the current crisis.

This ignores a simple reality. Just as growth in the Asia Pacific made the G20 indispensable a decade ago for the global economic recovery, this is likely to be the case again today. And just as it was then, this will be more important for the American economic recovery than it will be for any other country.

This is something President Bush could see when he first convened us in Washington in November 2008. It was something President Obama also recognized when he brought us to Pittsburgh less than a year later. And it is something that President-elect Biden will hopefully embrace, including as a key global pillar for his twin goals of dealing with the health and economic challenges posed by COVID-19.

The election of President-elect Biden provides new hope for the region in terms of the future of the G20, and especially its capacity to deal with the current crisis. But in order for the G20 to be able to reach its full potential in helping usher the world towards a post-COVID world, four things must happen.

First, once President-elect Biden takes office, the incoming Italian presidency should consider urgently convening G20 leaders early in the new year on the global health crisis. The only thing worse than the lack of a globally coordinated economic strategy in recent months has been the lack of a globally coordinated strategy to respond to the COVID crisis. Back in March, it took Saudi Arabia — not the United States — to convene the G20 on the crisis. But the absence of genuine engagement by the White House made Riyadh’s efforts nigh impossible.

As a vaccine hopefully nears, this becomes all the more important to avoid a breakout of intense vaccine nationalism. With many of the world’s major economies — including the United States — still experiencing a growth in cases, they also have plenty to learn from the G20 members which have fared much better, all of whom are from Asia. This includes Australia, South Korea, Japan, and even now China.

Second, any attempt by the Biden administration to kickstart an American economic recovery in earnest is likely to fall short without an equal appreciation of the need for a globally coordinated stimulus strategy which only the G20 can provide.

A decade ago, it was the growth in Asian markets that did the heaviest lifting in terms of the global recovery, and the IMF’s latest projections indicate this is likely to be the case again today. Whether the United States is able to harness this regional growth for its own recovery will therefore be a key question.

Third, the G20 needs to be willing to begin discussing wider economic governance reform. Undeniably, the Bretton Woods era has left the Asia Pacific with the short end of the stick in terms of their voice in economic institutions — something that is only becoming more glaring by the day. At the very least, the G20 should invite the host of the Asia Pacific Economic Cooperation to also be a permanent observer among a long cast of positions held by Europeans and Americans. More significantly, it might return to the question of how the IMF’s quotas could be better aligned with today’s global economic makeup.

In this regard, the IMF recently stated that the poor are getting poorer in the course of the pandemic and the economic gap is widening not only between countries but also within countries. We, therefore, hope that in the G20’s efforts to protect and revive the world economy, social justice will not be forgotten. The G20 should commit itself to a strong, balanced, and inclusive economic growth.

Finally, the G20 must urgently re-establish its credentials to also combat the emerging crisis of climate change. This is especially important for the Asia Pacific where the new economic normal is decarbonization, following recent announcements by China, Japan, and Korea.

Currently, less than a third of global stimulus is directed towards ensuring a green recovery. In order for the world to emerge in a stronger position to tackle the longer-term challenge posed by climate change, that share must at least double. Another first step would be for the G20 to finally deliver on the commitment to phase out fossil fuel subsidies, particularly given the crucial signal this would send to the private sector.

The G20 has already taken important steps to support the most vulnerable, including suspending and then extending all debt repayments to June 2021. It will also need to step up its support in other areas. This includes through addressing the pledge developed countries made in 2009 at the Copenhagen Climate Conference to deliver $100 billion a year in climate finance by 2020, which is not only falling short but is a drop in the ocean of what is ultimately required.

The G20 represents the one forum of global economic governance where the Asia Pacific’s voice stands strong. For this reason alone, the G20 remains indispensable to the region itself. But for the rest of the world, it is the Asia Pacific’s experience dealing with COVID-19 and projected economic growth that makes it even more indispensable as the world navigates its way through this new “COVID New (Ab)Normal.”