Not Just a Latino Issue: Undocumented Asians in America 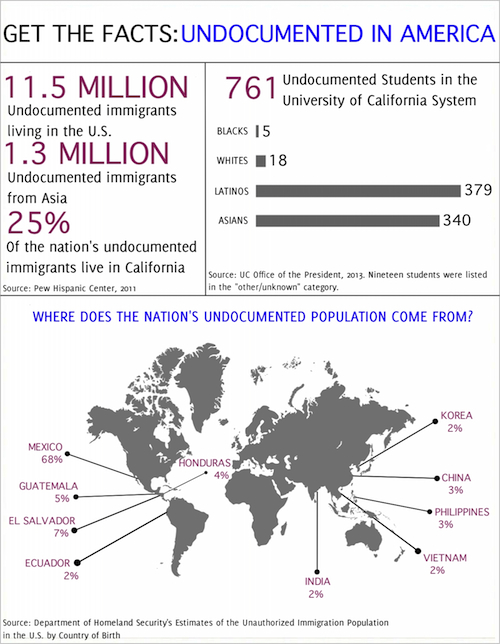 Who are the undocumented in the U.S.? Of all migrants to the U.S., 40% come from Asia, and out of 18 million Asian Americans in the country, 1.7 million are undocumented. Undocumented status in the U.S. is a civil, not criminal, violation. Comprising nearly 6% of the total population, Asian Americans and Pacific Islanders (AAPIs) are the fastest growing racial group in America. At the same time, Southeast Asians and Pacific Islanders are deported at a rate of three times more than that of immigrants as a whole.

Asians in America are routinely perceived as the model minority--the “good immigrants”--who are here “legally,” work hard, pay taxes, and abide by the law. Mari Matsuda, a lawyer, activist, and law professor, warns Asian Americans against becoming the “racial bourgeois” and calls for solidarity with Black and Latino/a communities within the larger immigration movement. This perceived status not only hurts other immigrant communities, but also marginalizes the many stories of undocumented Asians.

The truth is, not all AAPIs fit the good immigrant profile. Out of 1.7 million undocumented AAPIs, more than a quarter live below the poverty line, and Southeast Asians and Pacific Islanders are five times more likely to be deported for criminal convictions than other immigrant groups. Between 2009 and 2013, over 200,000 AAPIs were deported. However, AAPIs are ensuring their voices are heard, exemplified by youth groups such as ASPIRE and RAISE, which launched “Raise Our Story,” a platform that showcases stories of undocumented Asian-American youth. Even though they can't vote (yet), undocumented immigrants from Asia are becoming a social and political force to be reckoned with.

Join us on March 20, to hear directly from young activists, grassroots leaders, and legal experts on the often-overlooked narrative of undocumented Asians in America. Please click here for more information on the program.