"An Irrelevant Writer: The Letters of Shen Congwen" 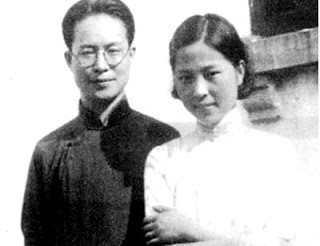 Our friends over at A Public Space journal let us know about their new issue, featuring "An Irrelevant Writer: The Letters of Shen Congwen" by Yiyun Li, an acclaimed novelist and friend of the Asia Society. We were unfamiliar with him before, but after reading up on him he seems to be really interesting.

Known by some as the Chinese equivalent to William Faulkner, Shen carefully crafted realistic and complex characters while also exposing the injustices committed by the military and the bourgeoisie. His works include novels such as The Long River, an idyllic story about modernity through the eyes of a young girl and her ferry operating grandfather, and short story collections such as Lamp of Spring andBlack Phoenix.

A prolific writer through the '20s to the '40s, the Communist Party's rise to power and restrictions on writing effectively ended his career. Suffering a nervous breakdown in 1949, Shen ceased writing fiction. His works were subsequently banned in Taiwan and burned throughout China, and by and large his memory and influence as a writer went unknown, especially in the Western world. However, by the 1990s Shen's work was beginning to be released, and his legacy as a great Chinese writer restored. In 1995, seven years after Shen's death, his wife Zhang Zhaohe published a collection of his personal letters spanning more than 50 years, Family Letters of Congwen. These letters give some insight into what the writer might have produced, had he kept at his art.

Yiyun Li took up the task of translating these letters into English for the first time in A Public Space journal. An accomplished writer in her own right, Li's work includes the collection A Thousand Years of Good Prayers and her latest novel The Vagrants. Be sure to pick up a copy of A Public Space and read up on this great writer.