The Future of the U.S. and China: Collaboration & Competition Event Recap 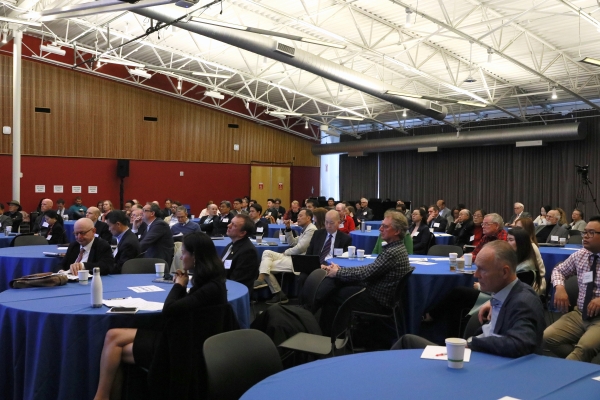 It's a full house at the start of Asia Society Northern California's The Future of the U.S. and China: Collaboration & Competition one-day conference in Silicon Valley. / Frank Jang 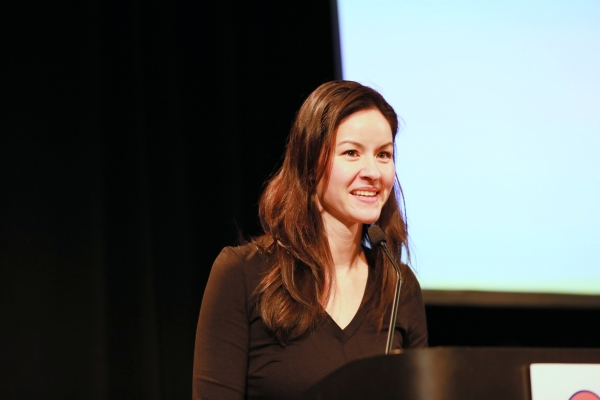 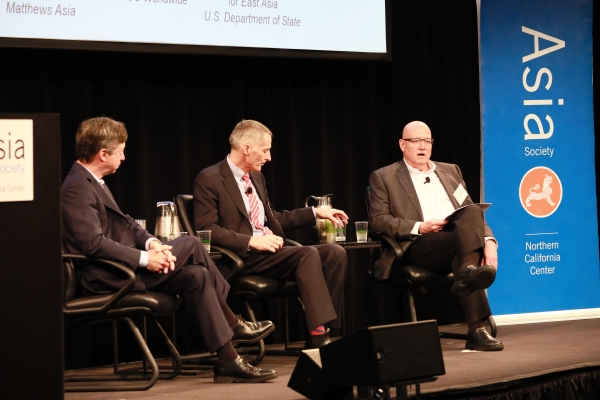 Session 1: U.S.-China Relations: Engagement, Decoupling, or Something Else (Off the record): Jonathan Fritz from the U.S. Department of State (Center) with fellow panelists Andy Rothman, Investment Strategist of Matthews Asia and Asia Society Board Member (Left) and James McGregor, CEO and Chairman of APCO Worldwide (Right). / Frank Jang 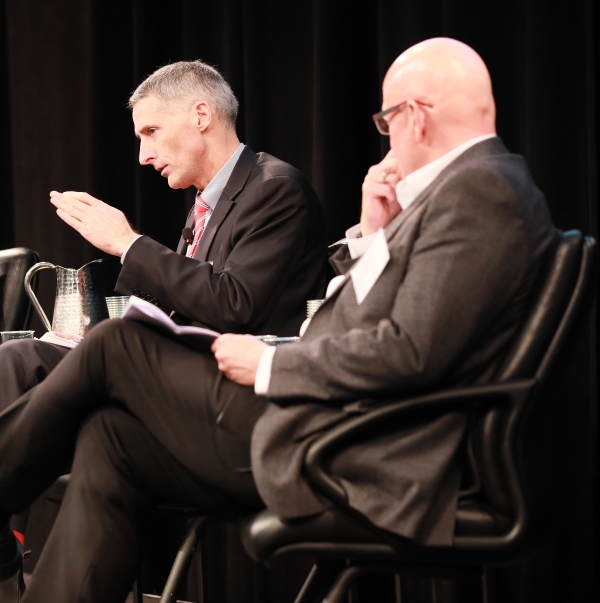 Session 1: U.S.-China Relations: Engagement, Decoupling, or Something Else (Off the record): Jonathan Fritz from the U.S. Department of State (Left) answering a question to an audience member with fellow panelist James McGregor, CEO and Chairman of APCO Worldwide (Right). / Frank Jang 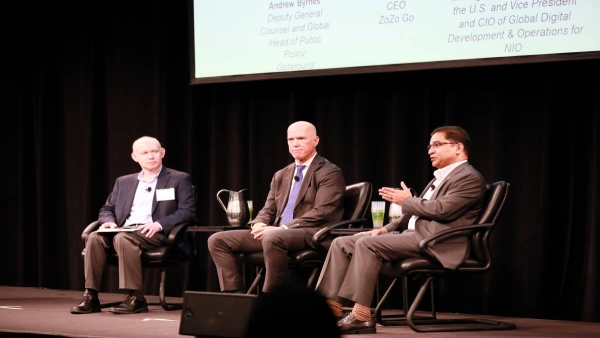 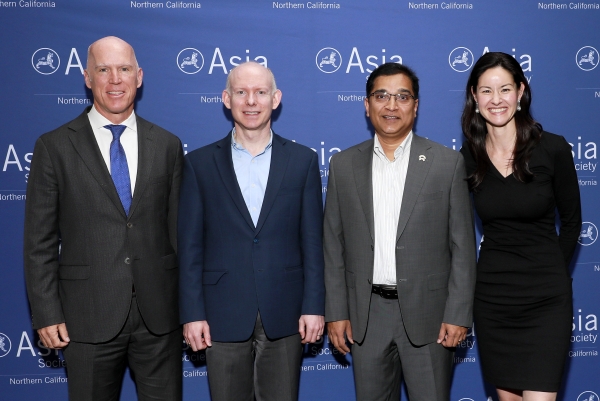 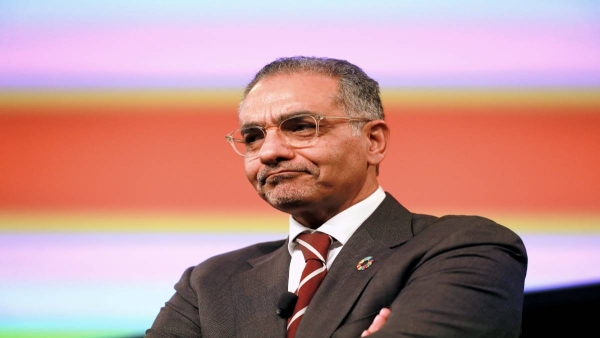 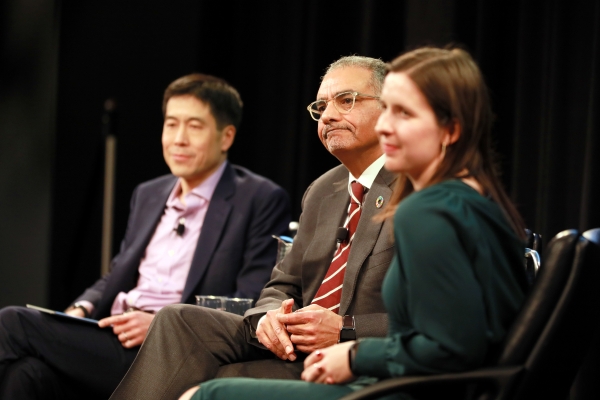 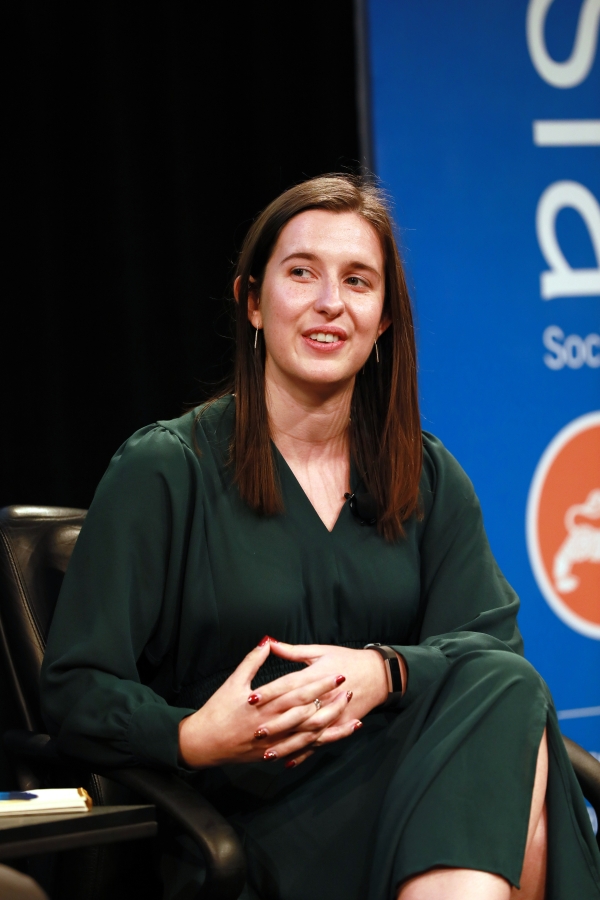 Session 3: Artificial Intelligence and Technology Diplomacy: Heather Evans, Director of Frontier and Technology Research at Asia Society Northern California gives her opinion on the future of the U.S.-China relationship in regards to AI. / Frank Jang 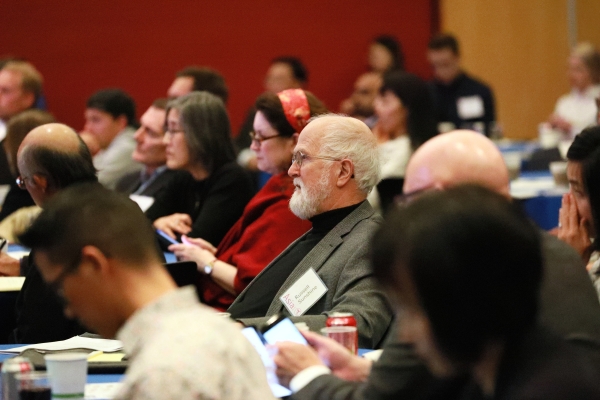 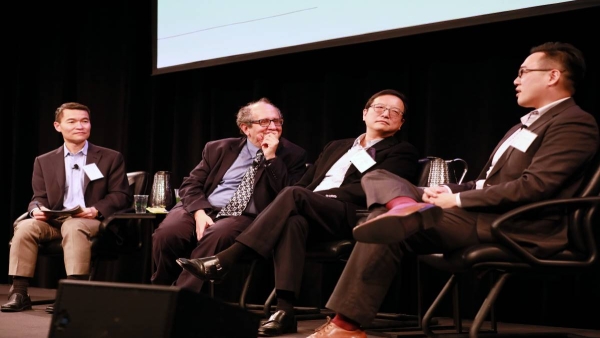 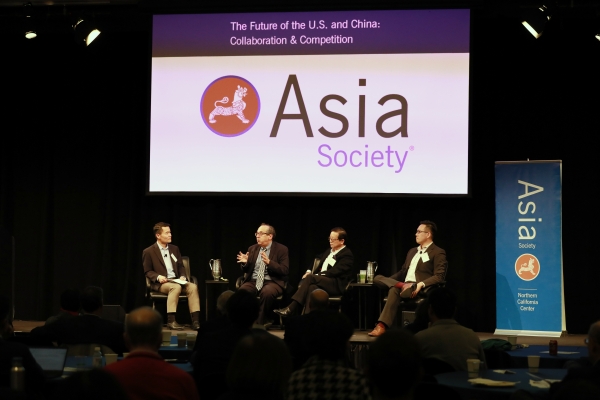 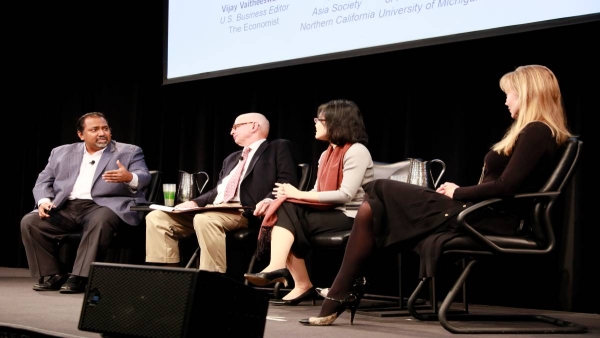 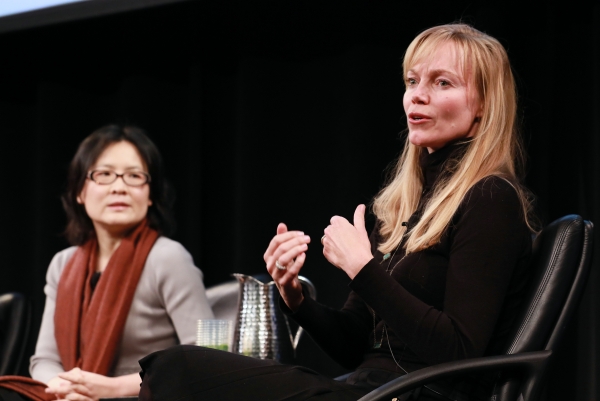 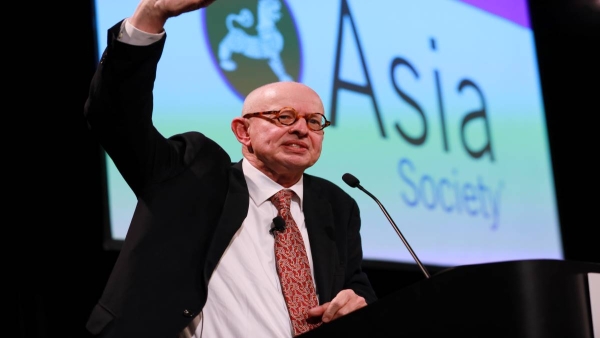 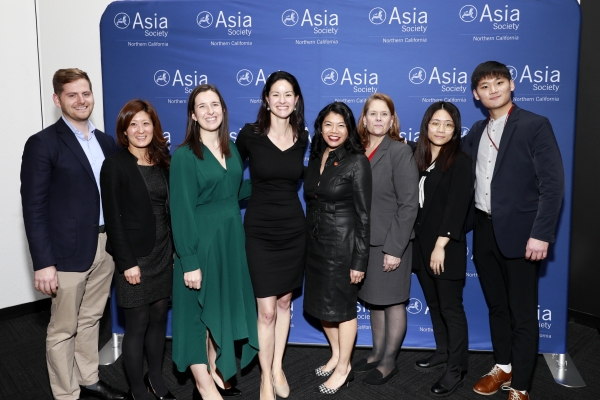 Asia Society Northern California members and guests gathered in a packed room at the Computer History Museum on January 15, 2020, for a full day conference on The Future of the U.S. and China: Collaboration & Competition.

The program included a series of five panels comprised of 18 speakers who traveled to the Bay Area from Shanghai, Beijing, New York, Washington, Detroit, Los Angeles and San Diego. Speakers included business leaders from the U.S. and China, social entrepreneurs, academics, and a representative from the U.S. Department of State. Panel discussions focused on AI, technology, the economy, trade, scientific exchange and how the U.S. and China will need to pursue a policy framework for a path forward.

China has emerged as a formidable competitor to the United States, not only in trade of U.S. goods and services, but also in the world of artificial intelligence. Fadi Chehadé, Chairman of Chehadé and Company, noted "more firewalls in China will go up in the upcoming years, reducing the flow of goods, ideas, and services." And Anja Manuel, Principal at RiceHadleyGates LLC said "[The U.S.] is building a wall in a space where technology is airborne."

Speakers also addressed fundamental matters, such as the outlook for the U.S.-China bilateral relationship in the upcoming years. Yuen Yuen Ang, Associate Professor from the University of Michigan noted that "China's industrial policy is big, but not strong" - a critique of the lack of innovation in China with concepts such as One Belt, One Road. Other discussions touched on the advantages and disadvantages of decoupling and engagement, the development of autonomous vehicles in the U.S. and China, and intellectual property rights.

U.S.-China Relations: Engagement, Decoupling, or Something Else - Off the Record - With increased political and trade tensions, is decoupling of the U.S.-China relationship a realistic possibility?
Speakers: Jonathan Fritz, James McGregor, Andy Rothman

Racing for Leadership: Future Vehicles - China passed the U.S. to become the world's largest auto market in 2009, and is now positioned to help revolutionize autonomous vehicles. The payoff could be in the trillions of dollars.
Speakers: Michael Dunne, Ganesh Iyer, Andrew Byrnes

Artificial Intelligence and Technology Diplomacy - The term ‘Artificial intelligence’ is featured in headlines, newly drafted legislation and corporate board rooms in the East and the West. Why is there such a focus on this field? How has it evolved over time, and what would winning the “AI arms race” mean for China or for the U.S.
Speakers: Fadi Chehadé, Heather Evans, Michael Chui

Collaboration and Competition: Pursuing a Policy Framework Forward - Will strategic 'competition and collaboration' become the new world order for U.S.-China relations, and what is at stake for the global economy?
Speakers: Vijay Vaitheeswaran, Anja Manuel, Ken Wilcox, Yuen Yuen Ang

Yuen Yuen Ang - Associate Professor of Political Science, University of Michigan - Yuen Yuen Ang is a political scientist and China specialist at the University of Michigan, Ann Arbor. She is named an Andrew Carnegie Fellow by the Carnegie Corporation of New York for “high-caliber scholarship that applies fresh perspectives to the most pressing issues of our times.” Professor Ang studies economic & political development and strategies for enabling innovation, with a focus on China and emerging markets. On China, her expertise lies in the politics of development, adaptive governance, and China’s growing global role, including the Belt & Road Initiative (BRI).

Andrew Byrnes - Deputy General Counsel and Global Head of Public Policy, Getaround - Andrew Byrnes is the attorney and operations executive with over 20 years of experience at the intersection of technology, law, business, and public policy. He was the former principal general counsel for Uber’s global rideshare business, and co-led venture-backed marketplace and SaaS companies, and a $3 billion federal agency. Byrnes has proven track record of driving growth in industries facing regulatory pressure and turning around businesses and teams in crisis.

Fadi Chehadé - Information Technology Executive, Founder of RosettaNet and Former Chief Executive Officer of ICANN - Fadi was President and CEO of ICANN, the global authority managing the Internet’s logical infrastructure. Fadi founded several companies in the digital space, including Vocado which was purchased by Oracle in 2018 and Viacore which was acquired by IBM in 2006. He also founded and led RosettaNet, an IT Industry Coalition establishing pioneering standards for eBusiness.

Michael Chui - MGI Partner, McKinsey & Company - Dr. Michael Chui is a partner at the McKinsey Global Institute (MGI), McKinsey's business and economics research arm. He leads research on the impact of disruptive technologies and innovation on business, the economy, and society. Michael has led McKinsey research in such areas as data & analytics, social & collaboration technologies, the Internet of Things, and artificial intelligence, robotics & automation. Prior to joining McKinsey, Michael served as the first chief information officer of the city of Bloomington, Indiana, where he re-architected the enterprise architecture using open source technologies and led a project that resulted in Bloomington becoming the first community in the world to offer both live and archived video streaming of public meetings on the Web.

Margaret Conley - Executive Director, Asia Society Northern California - Margaret Conley, a Bay Area native, is the Executive Director of Asia Society Northern California. Her non-profit experience includes the Los Angeles World Affairs Council, where she developed and launched an inaugural Future of Asia conference, and the Berggruen Institute, where she helped build a new Philosophy + Culture Institute with a focus on the US and China. Margaret was based in Asia for several years as a television news correspondent with ABC News in Jakarta and Tokyo and with Bloomberg Television in Shanghai. Her interviews include Howard Schultz, Richard Branson, Ban Ki-Moon, LeBron James and Beyoncé. In 2019, Margaret was selected as one of the Most Influential Women in Bay Area Business by the San Francisco Business Times.

Michael Dunne - CEO ZoZo Go - Michael Dunne is the founder of ZoZo Go, a consulting company focused on electric and autonomous vehicles. Dunne is an entrepreneur, an author and a key-note speaker. He knows cars and he knows China and how Asia business works - from creating his own company (Automotive Resources Asia), to running a car company (GM Indonesia) and to being the China-based lead of a world-respected icon of the global car business (JD Power).

Heather Evans - Director of Frontier Technology Research - Heather Evans is the Director of Frontier Technology Research. She recently studied, as a Schwarzman Scholar, at Tsinghua University in Beijing, China. Her master’s research at Tsinghua focused on evolving data governance policies. Heather has worked as an entrepreneur and civil servant. She served as the first Artificial Intelligence Senior Advisor to the Provincial Government of Ontario, helping to establish the Vector Institute of Deep Learning. She also started two businesses, in the spaces of Natural Language Processing and 3D Printing. Heather has collaborated with the National Academies of Science, the Royal Society and continues to mentor young entrepreneurs and policymakers.

Jonathan Fritz - Deputy Assistant Secretary for East Asia, U.S. Department of State - Jonathan Fritz is the Deputy Assistant Secretary of State for East Asian & Pacific Affairs responsible for China, Mongolia, and Taiwan coordination. Before that, he was the Director for Bilateral & Regional Affairs in the State Department’s Office of International Communications & Information Policy. Prior to that he was posted at the U.S. Embassy in Beijing, where he served alternately as Minister-Counselor for Economic Affairs, Chief of Staff, acting Deputy Chief of Mission, and chargé d’ affaires.

Ganesh Iyer - Managing Director of NIO in the U.S. and Vice President and CIO of Global Digital Development & Operations for NIO - Ganesh Iyer is a business-savvy CIO and Digital Ops Exec with over 30 years of experience delivering proven results in various industries including Autonomous Tech, Hi-Tech, Manufacturing and Telecom. He’s recognized for achieving significant growth in historically challenged digital organizations in emerging and global markets. And he is an expert at change management and building relationships across the organization to achieve company goals.

Chia-Chi Li - Legal Director, International Business Legal Center - Chia-Chi Li is the legal director of the international business legal center at Tencent. Before that, Li worked at Microsoft. He studied at University of California, Berkeley and University of Washington. Li now lives in Shenzhen, China.

Andy Rothman - Investment Strategist, Matthews Asia - Andy Rothman lived and worked in China for more than 20 years, analyzing the country’s economic and political environment, before joining Matthews Asia in 2014. As Investment Strategist, he has a leading role in shaping and presenting the firm’s thoughts on how China should be viewed at the country, regional and global level.

Ken Wilcox - Chair, Asia Society Northern California - Ken Wilcox currently serves as Emeritus Chairman of Silicon Valley Bank and was Vice Chairman of SPD Silicon Valley Bank. He was previously the CEO of SVB Financial Group. Wilcox is Chairman of the Board of the Asia Society of Northern California, Treasurer of the Asian Art Museum, and Chairman of the Board of the 21st Century China Center Advisory Board. Also, he is a member of the board of the Equilibrium Capital Group, and Chief Credit Ofﬁcer of Columbia Lake Venture Debt Fund. He is also an adjunct professor and member of International Advisory Board at Fudan University in Shanghai.