[WEBCAST] The Holding Foreign Companies Accountable Act: Will Chinese Companies Be Delisted from the U.S.? 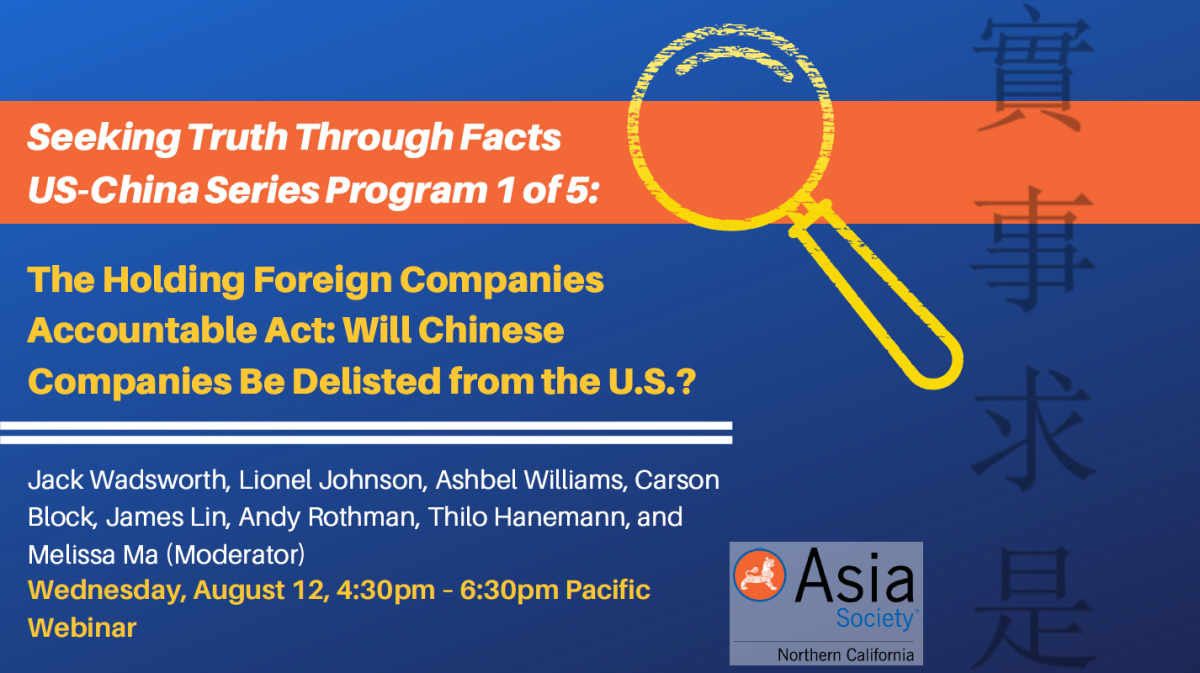 Asia Society Northern California will launch a five-part U.S.-China program series called Seeking Truth Through Facts on Wednesday, August 12. This first program will be a panel discussion on the topic of The Holding Foreign Companies Accountable Act: Will Chinese Companies Be Delisted from the U.S.​​​ in partnership with Pacific Pension & Investment Institute with data provided by Rhodium Group.  This event is private and off-the-record.

On May 20, 2020, the United States Senate unanimously passed the Holding Foreign Companies Accountable Act, which requires U.S.-listed foreign companies to comply with regulatory and audit practices under the United States’ Public Company Accounting Oversight Board (PCAOB). These practices have been unenforceable on firms based in Hong Kong and Mainland China, due to various Chinese laws.

A vote on the bill is now pending in the U.S. House of Representatives. If it is passed and signed into law, several Chinese companies could be forced to delist from U.S. stock exchanges. In response, Yi Huiman, Chairman of the China Securities Regulatory Commission, has expressed support for cross-border cooperation on financial regulation and said that the improvement of information disclosure of listed companies is a shared responsibility among securities regulatory authorities. On the sidelines, this development has also caught the attention of global companies, institutional investors, and foreign policy experts.

Against the backdrop of U.S.-China economic decoupling, if the bill is enacted, is it more likely to force changes in audit inspection access or compel foreign companies to delist? Will this bill hurt or improve the competitiveness of U.S. exchanges in the long run, and during a pandemic-induced financial downturn? Is this a benign financial regulatory issue or one that has geopolitical connotations with regard to U.S.-China relations?

Please email Palarp Jumpasut at pjumpasut@asiasociety.org if you are interested in attending.  Space is limited and priority will be given to Groundbreaker and Innovator members.

Link to join virtually via Zoom will be emailed out the day before and an hour before the program is scheduled to begin by Palarp Jumpasut, Director of Partnerships (pjumpasut@asiasociety.org).  We encourage participants to turn their cameras on to make this session as interactive as possible.

Lionel C. Johnson became president of the Pacific Pension & Investment Institute in July 2014. His career spans more than three decades during which he has been a leader in international business, public policy, and economic development. He has served as senior vice president of the Initiative for Global Development, as vice president of Turkey, Middle East, and North Africa Affairs at the Chamber of Commerce of the United States, and as senior vice president of Public Affairs at Fleishman-Hillard. Previously, Johnson was vice president and director of International Government Affairs at Citigroup and deputy assistant secretary of the Treasury for International Development, Debt and Environment Policy in the Clinton Administration. He was also a senior advisor for Resources, Plans, and Policy to Secretary of State Warren Christopher, and a member of the Department of State Policy Planning Staff. He served as deputy director of the Clinton/Gore transition team at the Department of State. As a member of the U.S. Foreign Service, Johnson held assignments in the U.S. Embassies in Haiti, the Philippines and Kenya. He also served as special assistant to Secretaries of State George P. Shultz and James A. Baker III. Johnson was a senior program officer at the National Democratic Institute for International Affairs. He was a graduate instructor of U.S. foreign policy and American politics at the City University of Manila, Philippines, and received his B.A. in political science from Rutgers University in 1982. Johnson is a member of the board of trustees of the RAND Corporation in Santa Monica, California. Johnson also serves on the board of directors of Foreign Policy for America, the International Research & Exchanges Board (IREX), the National Democratic Institute for International Affairs (NDI), the Truman National Security Project, and the U.S. Global Leadership Coalition.  He has two children, Alicia and Christopher.

Ashbel C. "Ash" Williams is executive director and CIO of the Florida State Board of Administration. The SBA has more than $150 billion in funds under management, including those of The Florida Retirement System Pension Plan. Williams began his career as a staff member of the Florida House of Representatives, serving as executive assistant to two House speakers. He also worked as deputy chief of staff to then-Gov. Bob Graham and chief of staff to Comptroller Gerald Lewis. Williams became president and CEO of Schroder Capital Management in New York City in 1996, and was a managing director at Fir Tree Partners, a value-oriented hedge fund, when he joined the SBA. He is a member of the board of trustees of the Florida State University Foundation and founded the Williams Scholarship Fund. Williams has a B.S. and MBA from Florida State University.

Carson Block is the founder of Muddy Waters Research.  In 2011, Block was ranked as a 50 Most Influential Thinker by Bloomberg Markets. Muddy Waters, LLC is a pioneer in on-the-ground, freely published investment research and produces three types of research product: business fraud, accounting fraud, and fundamental problems. Business fraud reports focus on issuers that have massively overstated their revenues. Accounting fraud reports cover real businesses that boost profits through fraud. Fundamental problem reports discuss opaque businesses that have serious fundamental problems that the market does not yet perceive.

James C. Lin is a partner in the Davis Polk & Wardwell LLP Corporate Department, resident in Hong Kong. His practice focuses on public and private corporate finance transactions, including initial public offerings, convertible and high-yield debt offerings and private equity investments, and mergers and acquisitions. Lin has worked on some of the most significant capital markets transactions in Asia, including with companies from the technology, media, Internet, healthcare, banking, natural resources, real estate, financial services, energy/oil and gas and other sectors. He is recognized as one of the leading capital markets lawyers in Hong Kong/China by top tier international legal directories and surveys, including Chambers and IFLR1000. Lin is fluent in English and Mandarin.

Andy Rothman is an Investment Strategist at Matthews Asia. He is principally responsible for developing research focused on China’s ongoing economic and political developments while also complementing the broader investment team with in-depth analysis on Asia. In addition, Andy plays a key role in communicating to clients and the media the firm’s perspectives and latest insights into China and the greater Asia region. Prior to joining Matthews Asia in 2014, Andy spent 14 years as CLSA’s China macroeconomic strategist where he conducted analysis into China and delivered his insights to their clients. Previously, Andy spent 17 years in the U.S. Foreign Service, with a diplomatic career focused on China, including as head of the macroeconomics and domestic policy office of the U.S. Embassy in Beijing. He earned an M.A. in public administration from the Lyndon B. Johnson School of Public Affairs and a B.A. from Colgate University. He isa proficient Mandarin speaker.

Thilo Hanemann is a partner at Rhodium Group and leads the firm’s work on global trade and investment. Thilo supports the investment management, strategic planning, and policy analysis requirements of Rhodium clients within his fields of expertise. He is also a Senior Policy Fellow at the Mercator Institute for China Studies, Europe’s biggest China think tank, located in Berlin. Thilo’s research focuses on new trends in global trade and capital flows, related policy developments, and the political and commercial dynamics of specific transactions. One of his areas of expertise is the rise of emerging economies as global investors, and the implications for host economies and the global economy. His most recent work focuses on the evolution of China’s international investment position, and the economic and policy implications of this new trend.