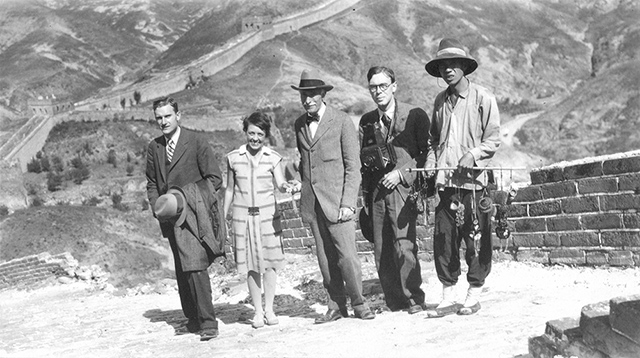 In 1863, 24-year-old John D. Rockefeller recorded his first interest in Asia — a $10 donation to a missionary organization in China. Thus began the Rockefeller family’s long and profound engagement with Asia — an engagement that led to the birth of the Asia Society, and which continues well into the 21st Century.

In 1929, as the crash of Wall Street rippled through an already tumultuous Asia, Rockefeller’s grandson, John D. Rockefeller 3rd, embarked on his first trip to Asia as a newly-minted graduate of Princeton University. That trip would forever shape his worldview — namely, that understanding and respect are essential to a more peaceful and prosperous world.

Three decades later, as Asia began lifting from the wreckage of wars, the younger Rockefeller founded Asia Society with one basic intent — in his own words — “to contribute to broader and deeper understanding between the peoples of the United States and Asia.” He said he believed in “the shared hopes, fears and aspirations” of Asians and Americans.

Rockefeller described “understanding” as “the most subtle and delicate, difficult and elusive bond that can link continents and nations and even men” and that “it strikes deeper than mere tolerance; it reaches further than mere acquaintance or formal association; it is that quality of mind and spirit whose existence is essential to true peace.”

To this day, this wisdom and lofty vision of Rockefeller are ingrained in the very identity of Asia Society, particularly as the continent of Asia is rising in every way imaginable: influence, power, income, and, of course, in terms of the level of interest from the rest of the world.

More than ever before, Asians and Americans, and indeed the world at large, share a common destiny — one that rests upon “broader and deeper understanding” as Asia faces unprecedented challenges and finds itself home to a host of new flashpoints. Fortunately for us, we have a decades-long foundation on which to build. And today the Asia Society is deploying cutting-edge tools, in multiple disciplines, through an unparalleled global network, in pursuit of the original Rockefeller mission.

In 2014, Asia Society inaugurated the Asia Society Policy Institute, a different kind of think tank — Asia-centric, nonpartisan, and determined to see problems solved. With top level advisors — including former heads of state, CEOs, civil society leaders, scholars, and five former U.S. Secretaries of State — the Institute is creating solutions that advance the prosperity, security, and sustainability of Asia. In 2015, we welcomed former Australian Prime Minister and Foreign Minister Kevin Rudd as president of the Asia Society Policy Institute, a major statement in itself of the power of this new entity.

Since its founding, Asia Society’s commitment to the arts has been central to its mission. Today, our critically-acclaimed work in the arts celebrates the vibrancy of Asia’s creative spirit through seminal exhibitions and performances at Asia Society Museum in New York as well as at our cultural spaces in Hong Kong and Houston. Asia Society Museum: The Asia Arts and Museum Network seeks to foster collaboration in the cultural sector through programs, projects, and digital resources. In 2015, Boon Hui Tan, the former head of the Singapore Arts Museum, joined Asia Society as vice president for global arts and cultural programs and museum director to lead these efforts and build on our rich history of arts and culture programming.

A rising Asia requires a rising generation of students to understand its cultures and complexities. Through our Center for Global Education, led by Anthony Jackson, Asia Society has developed an internationally recognized approach to foster the global competence of students. We build the capacity of educators and leaders to support student success in a global era. We are also leading a major effort to help bring Mandarin-language instruction and the study of China and Chinese culture to children in the United States. And we are fostering an unprecedented collaboration among North American and Asia-Pacific educators, in the pursuit of best practices in global education.

These core pillars are at the heart of our work, and they inform our highly acclaimed public programs that can be seen in any of the Asia Society’s dozen global centers. The bridge building that so animated Rockefeller is found in Asia 21, our unparalleled Young Leaders Network, as well as in the Center on U.S.-China Relations, led by the great China scholar Orville Schell.

How are we doing? Recently Ambassador Ryan Crocker, who has served as U.S. Ambassador in Afghanistan, Iraq, Pakistan, Syria, Kuwait and Lebanon, praised the quality of those programs, and more broadly he praised the way in which we link the worlds of policy with the arts and culture.  “The Asia Society knows more about Asia and the interlocking dynamics than any other organization,” said Crocker. “No one else does what you do.”

Josette Sheeran is President and CEO of the Asia Society.