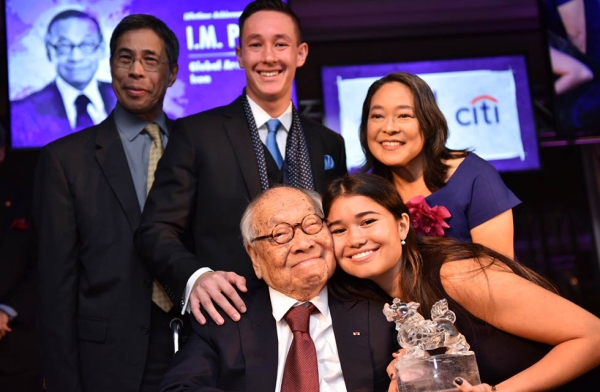 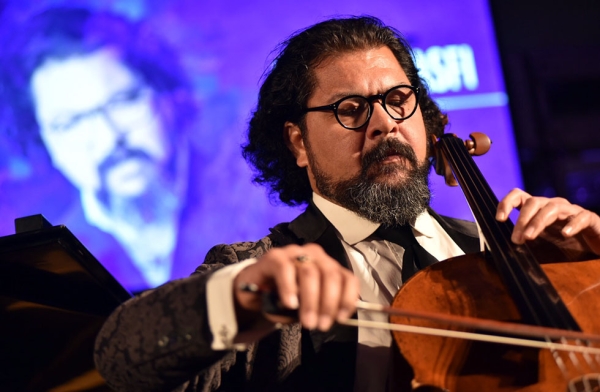 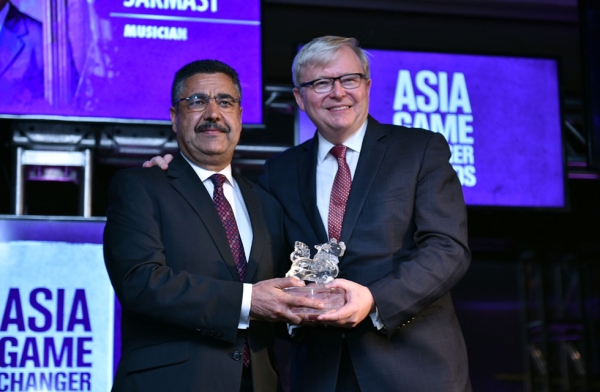 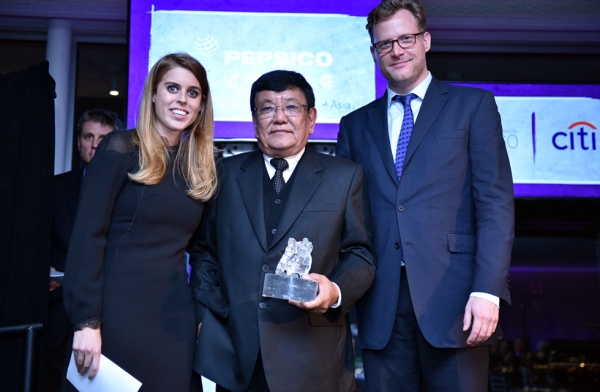 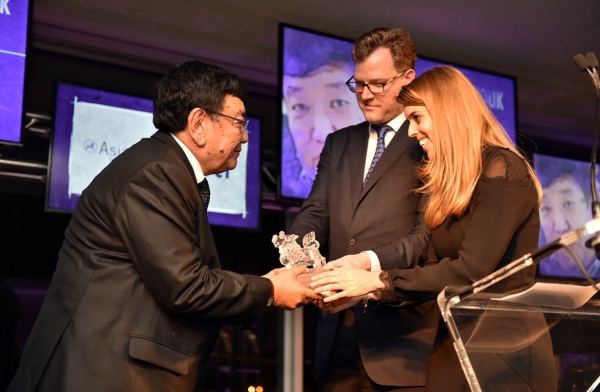 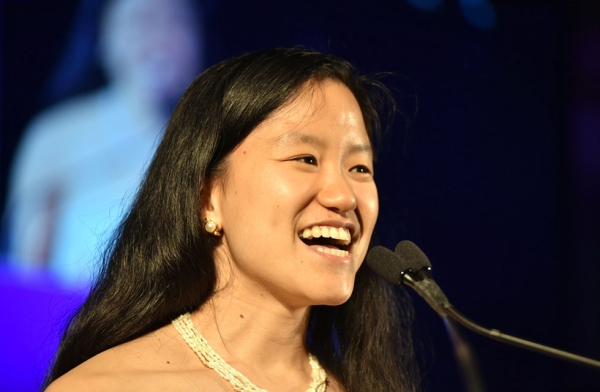 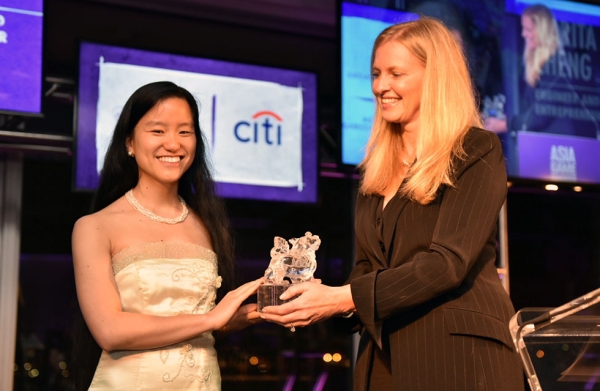 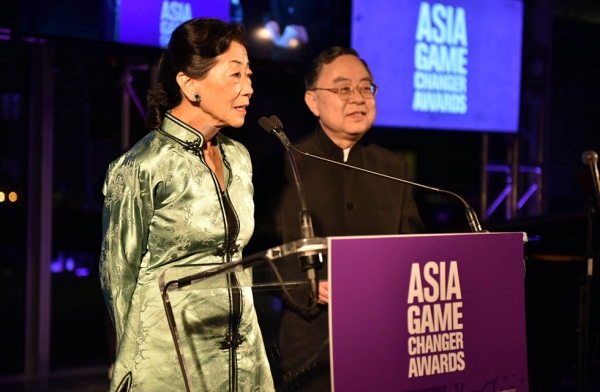 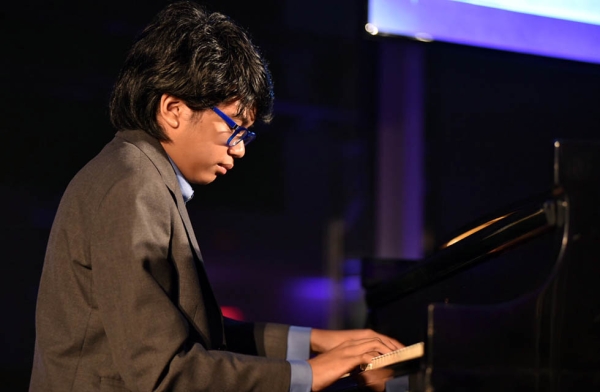 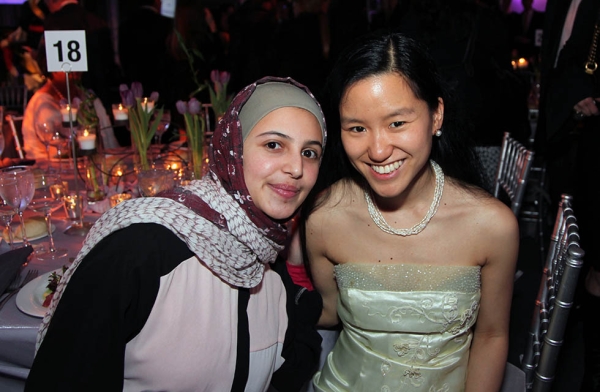 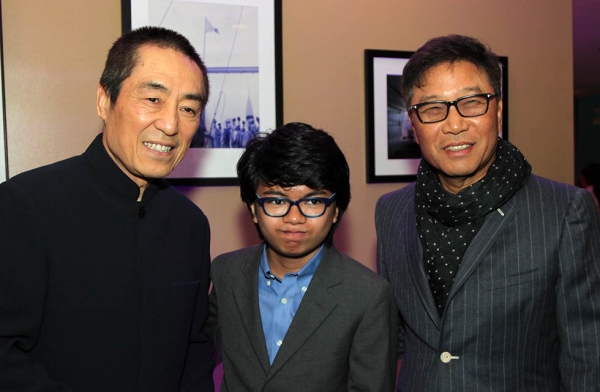 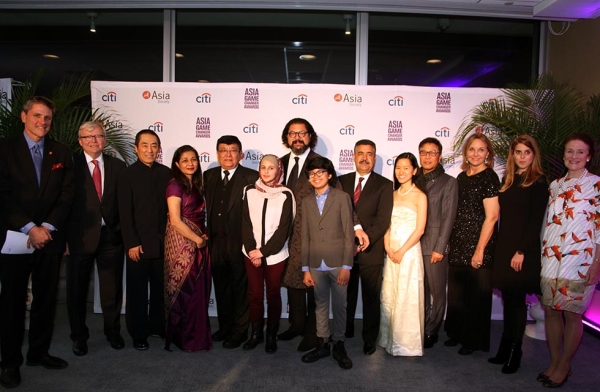 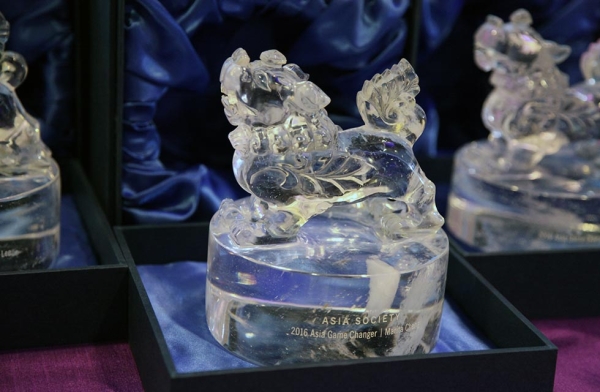 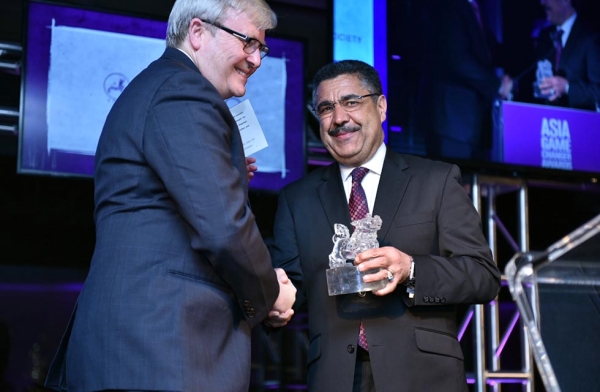 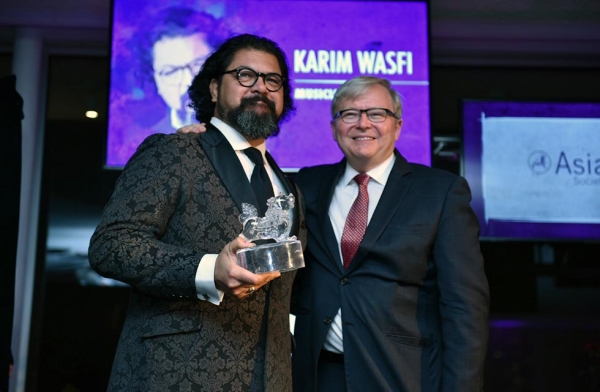 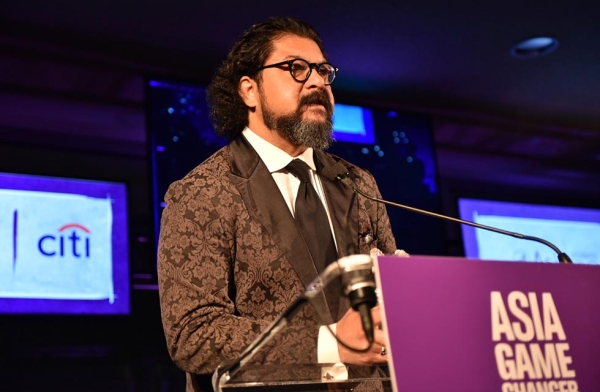 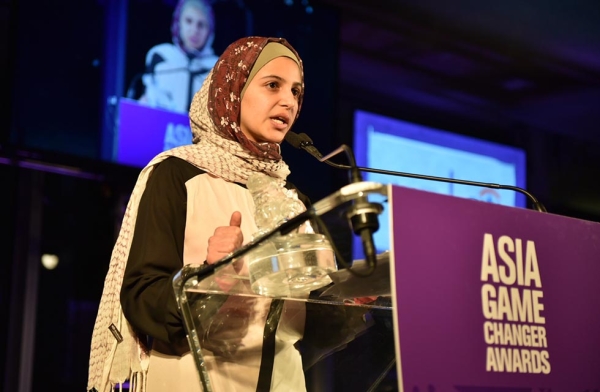 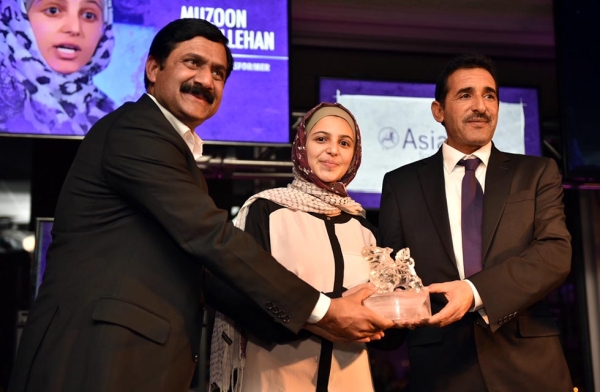 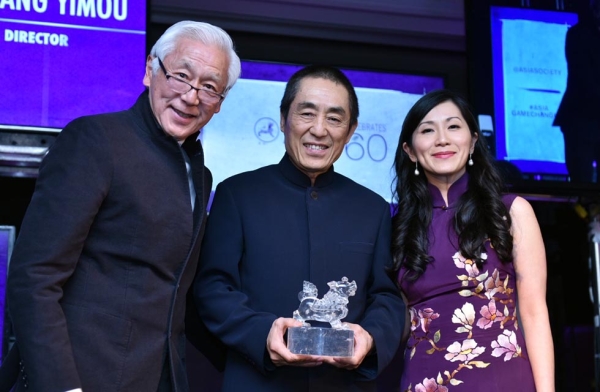 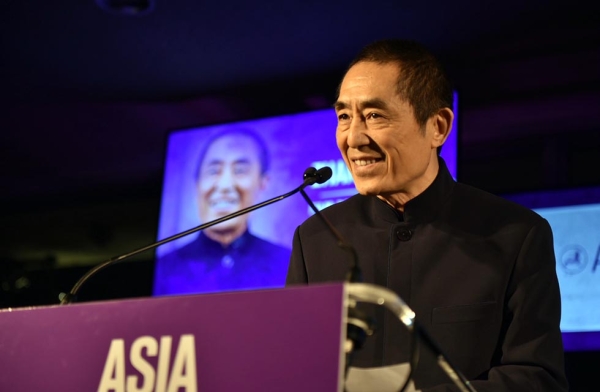 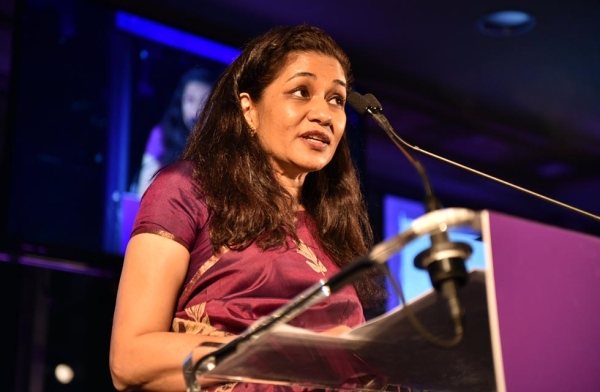 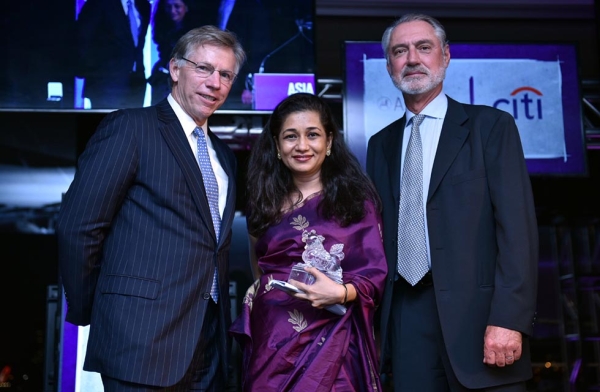 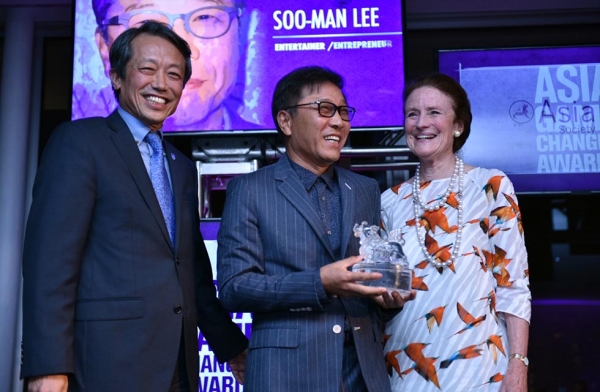 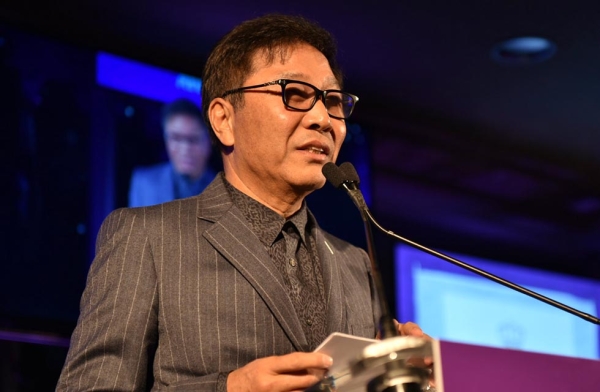 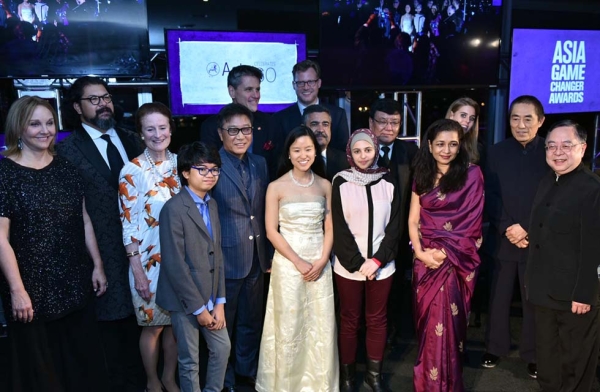 Asia Society honored the legendary architect I.M. Pei with a lifetime achievement award at the third annual Asia Game Changer Awards, an Asia Society celebration held at the United Nations in New York on Thursday night. In addition to Pei, nine other notable Asians were honored for their impact in shaping the world.

Born in China, the 99-year-old Pei is responsible for a number of iconic structures, including the pyramid at the Louvre in Paris, Hong Kong's Bank of China building, and the Kennedy Library. He is also known for his role as a teacher to successive generations of architects. Accompanied by his daughter and grandchildren, Pei addressed the crowd with characteristic humility. "Thank you all for coming. I have nothing to say," he quipped before he expressed his gratitude for the recognition.

Thursday's honorees included Ahmad Sarmast and Karim Wasfi, musicians from Afghanistan and Iraq, respectively, who established music academies amid persistent violence in their countries; Marita Cheng, whose startup Robogals has provided opportunities for women in engineering; Durreen Shahnaz, a pioneering Wall Street financier turned social entrepreneur from Bangladesh; the acclaimed, award-winning Chinese filmmaker Zhang Yimou; Muzoon Almellehan, a Syrian refugee whose advocacy of education has earned her comparisons to Nobel laureate (and 2014 Asia Game Changer) Malala Yousafzai; and Soo-Man Lee, a Korean impresario under whose stewardship K-pop has emerged as a global phenomenon.

A common theme uniting this year's batch of Asia Game Changers is their courage. Their ranks include Sanduk Ruit, a Nepalese eye surgeon who has cured blindness in some of Asia's poorest countries, including North Korea, and has made eye care affordable and accessible to many others. Sarmast, the Afghan musician, who established the National Institute of Music in Kabul in 2008 when he found there was no orchestra in the country capable of playing the Afghan national anthem. He has educated hundreds of aspiring musicians in the years since, even after surviving a deadly terrorist attack in 2014. And Wasfi, a member of the Iraqi national symphony, who traveled to the site of car bombings in Baghdad to play his cello in the midst of rubble, turning his viral fame into a vehicle for promoting music in his country.

"This is not just devoted to the lives that have been lost — but to those who have decided to live the right," Wasfi said of his award. "It's not just about how we die. It's about how we live."

In 2013, Almellehan arrived at the Zaatari refugee camp in Jordan after fleeing her Dara'a, Syria, in the midst of that country's civil war. In this unlikely setting, Muzoon emerged as a forceful advocate for education, in particular stressing the rights of girls to go to school. Now 17, Muzoon's efforts have earned her comparisons to Malala. Despite the teenager's impressive accomplishments, she refused to use her acceptance speech to talk about herself.

"I'm here for millions of children who have lost their hopes and dreams and cannot get their right to an education," she said. "Most people think we cannot change our communities. But we can. Change is difficult. But it's not impossible. We need our knowledge — because our countries need us."

Remarkably, Muzoon wasn't even the youngest Game Changer at this year's ceremony. That would be Joey Alexander, the 13-year-old Indonesian piano prodigy, who dazzled the guests with a performance of an original composition, "City Lights," that kicked off the show. "I don't see myself as a game changer," he said in accepting his award. "I'm a musician — and I play jazz." But, he allowed, "you can make a difference even when you're very young."

As the evening wound to a close, Alexander approached the stage for his second performance of the evening. There, he was joined on stage by Wasfi, the cellist, for an impromptu jazz duet set against the backdrop of the East River — an appropriate way to conclude a celebration of ten remarkable individuals.

Watch the acceptance speeches of each Asia Society Asia Game Changer below: