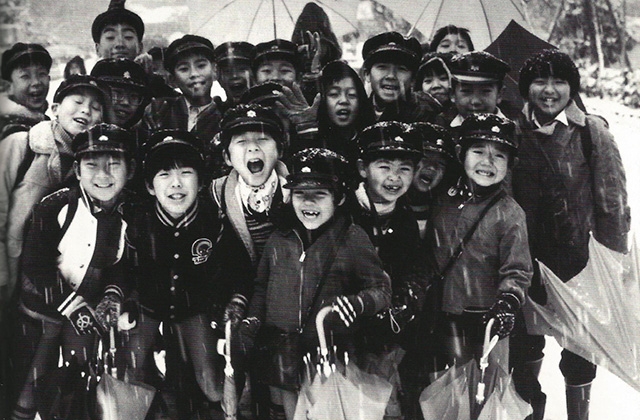 In 2001, Asia Society published a report titled Asia in the Schools that surveyed how much American students and adults knew about Asia.

Among the report’s findings: Half of adults and two-thirds of students incorrectly thought that Vietnam was an island nation. More than 80 percent of both groups didn’t know that India was the world’s largest democracy. A quarter of high school students couldn’t name the ocean that separates the United States and Asia.

“There is a huge gap between the strategic importance of Asia — the largest, most populous, and fastest growing area of the world — and Americans’ disproportionate lack of knowledge about this vital region,” the report concluded.

This lack of knowledge, though, wasn’t for a lack of recognizing Asia’s growing importance. The report also found that 74 percent of students and 82 percent of adults agreed that learning about Asia would help prepare for life and work in the next century. The problem, it seemed, was in the schools.

'A Wave of New Initiatives'

“There was a huge need for Asia Society to ramp up its efforts on a more national, and eventually international, scale to support learning about Asia and make connections between American students and educators, and their counterparts in Asia,” said Tony Jackson, Asia Society’s current vice president of education. “That set off a wave of new initiatives towards the end of developing broader global awareness among youth.”

This week Asia Society will launch the culmination of these initiatives with the Center for Global Education — designed to convene leaders and institutions from around the world to open dialogue on how to educate students for employability and citizenship in a global era. It represents the next step for an organization that for 60 years has been pursuing founder John D. Rockefeller 3rd’s mission “to contribute to broader and deeper understanding between the peoples of the United States and Asia.” But when it comes to the education students receive, that one sentence mission has been massively complex.

The 2001 survey made clear that for any substantive change to occur, it would have to start in the schools. Seventy-six percent of students identified teachers and schools as their primary source of information on Asia, while more than a quarter of adults pointed to their childhood schooling as the main source their knowledge. However, a 1999 teacher survey found that kindergarten through 12th grade (K-12) social studies teachers devoted on average less than 5 percent of class time to Asian content.

In addition, the Asia in the Schools report found that even that amount of time was often spent painting a very skewed or inaccurate portrait. “Asian cultures are portrayed as universally exotic or impoverished or both, despite the diversity that characterizes the region,” the report stated. “Textbooks don’t give an Asian viewpoint, modern perspective, or materials that feature teens.”

Since its founding in 1956, Asia Society had been playing host to schoolchildren at its museum exhibitions and holding workshops, trying to give young Americans a taste for the depth of culture in the nations on the Asian continent. Then in the 1980s, the organization expanded its reach with a full education department that produced materials to give students a better understanding of Asia. One of its most successful projects was a 12-part documentary series called Video Letter from Japan showing the daily lives of Tokyo sixth graders, which was followed by similar projects focused on India and South Korea.

However, it appeared these teaching materials weren’t finding their way into classrooms on a large scale. The 2001 report found through interviews with Asia scholars and curriculum specialists that, despite the existence of high quality teaching materials related to Asia, schools and teachers didn’t have the resources to make use of them, or didn’t even know of their existence. “More significantly, there is little school system support for the added time and effort needed to find and develop appropriate uses for them in the classroom,” the report added.

“I think 15 years ago, our main task wasn’t raising awareness of Asia,” said Jeff Wang, director of China Learning Initiatives at Asia Society. “It was raising awareness of a lack of any kind of education opportunities or resources to actually get Asia into the schools.”

At this point, it was becoming increasingly clear that if it wanted to make an impact, Asia Society would need to think bigger than just producing classroom materials. It would need to push a systemic shift in the very way students are taught about the world and their place in it. Thus, Asia Society began what would morph into a drive to not just educate young Americans about Asia, but to make students around the globe better at relating to the international community and becoming true global citizens.

In 2001, Vivien Stewart, former senior education advisor to the United Nations, was brought on to head Asia Society’s education initiatives. She quickly learned that the task of getting American students a better international education was a mammoth one. “It’s extraordinarily difficult to have an impact on [K-12 education] in the United States,” Stewart said, noting that there are some 15,000 school districts, 100,000 schools, and over a million teachers. “It's not as if you can get policy changed at the federal level and it will waft over the whole school system. The federal government role is very small and highly restricted. You have to have a different strategy.”

This strategy involved starting at the grassroots level, which Asia Society did by setting up a network model schools that revolved around an internationally oriented education. It called this the International Studies Schools Network (ISSN), which had a two part mission: Close the achievement gap for low-income and historically underserved secondary students; and address the growing opportunity gap between what American schools typically teach and the knowledge, skills, and dispositions required for full participation in a global economy.

“That's actually been our mantra from the beginning,” Jackson said. “As we redesign academic excellence to include a broader global understanding and awareness, in addition to academic achievement, we have always stuck to the notion that there needs to be a focus on equity as well — that this kind of education has to be extended to all students. So a significant effort has to be made to locate our work in disadvantaged communities where they might not receive this kind of education otherwise.”

With model schools that could be used to illustrate best practices, Asia Society also began bringing together education leaders from the state level in various summits and task forces to emphasize the importance of putting more education on Asia into school curricula — something 24 states eventually did in some capacity, according to Stewart. Part of that drive also involved bringing American education leaders on trips to Asia. “I think that was very powerful motivator for them to take those issues to their states and their schools,” Stewart said. “But it also led to something that we had actually not anticipated — the idea that American and Asian schools could learn from each other.”

She said schools in Asia always knew they had lessons to learn from the United States, but that feeling usually wasn’t mutual. However, after studies like those from the Program for International Student Assessment (PISA) started finding that students in some Asian countries were far outperforming their American counterparts in certain subjects, it became clear that Americans did have something to learn from education in Asia. In 2012, this yielded Asia Society’s Global Cities Education Network (GCEN), which connects the education authorities from six cities in Asia and five in North America so they can exchange notes on what’s working. 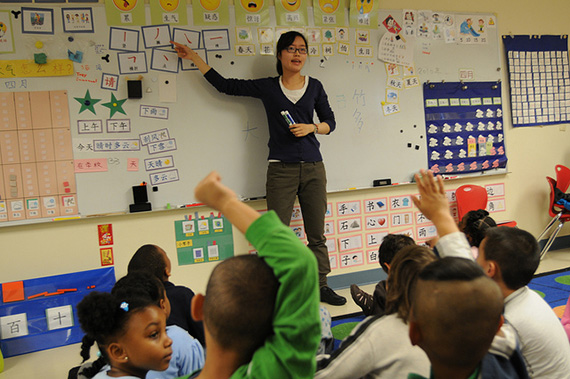 But perhaps Asia Society’s most far-reaching effort has been to give students the most practical tool for engaging with Asia and improving their career prospects: fluency in a second language. “It's famously said that America is a multilingual society that turns out monolingual graduates,” Stewart said. “And around the time the Asia in the Schools report came out, you could almost count the number of [K-12] schools teaching an Asian language on your fingers — and those were mostly elite schools.”

This came at a time when interest in China and recognition of its economic opportunities were starting to mushroom. The demand for learning Chinese was starting to take off, but many schools were struggling to facilitate that demand. So Asia Society created handbooks and DVDs instructing schools how to set up Mandarin programs; it started connecting American and Chinese students through school-to-school partnerships; and in 2007 began hosting an annual National Chinese Language Conference, which has grown from some 200 participants in its first year to over 2,000 in its latest meeting.

All of these efforts have been in some way aimed at pushing development of “global competence” — a term largely developed by Asia Society that’s become popular in education circles over the past decade. This refers to a skillset needed to thrive in an increasingly internationalized and multicultural world. “What we've tried to do is think about both the cognitive capacities, as well as the kind of social emotional learning that young people need in order to be fully able to operate in a global environment,” Jackson said. “…given especially that the diversity of the world is now evident in everyone's neighborhood.”

The idea of instilling students with “global competence” is quickly becoming recognized around the world — especially at a time when globalization is yielding economic equality and a re-emergence of nationalism and social division in many regions. In hopes of seeing where different countries stand, the Organization for Economic Cooperation and Development (OECD) will test students in its member countries on global competence for the first time ever in its next round of PISA testing in 2018.

“In the past, education was about teaching people something,” wrote OECD Education Director Andreas Schleicher in the BBC in explaining the section’s inclusion. “Now, it is also about making sure that children develop a reliable compass, the navigation skills, and the character qualities that will help them find their own way through an uncertain, volatile, and ambiguous world.”

'A Sea Change in the Education Field'

It’s with this goal in mind that Asia Society is now launching its Center for Global Education. “The center comes at this inflection point where we've done a lot of work and there's been a sea change in the education field — and society in general — in understanding the need for young people to have a different set of knowledge and skills in a different kind of economic and social environment,” Jackson said.

“We call it global competence — other countries have different names — but it basically comes down to the recognition that rote learning in school and the old style of knowledge acquisition isn't going to be enough. You have to have a capacity to use what you know to solve problems — many of which have a global aspect to them.”

He added, “We want to see if we can affect a world movement in the development toward global competencies.” 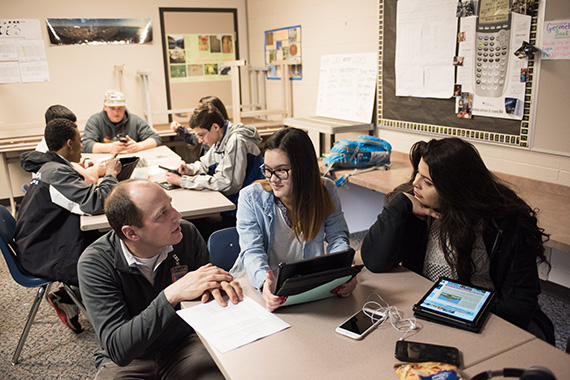 The Future of Education at Asia Society