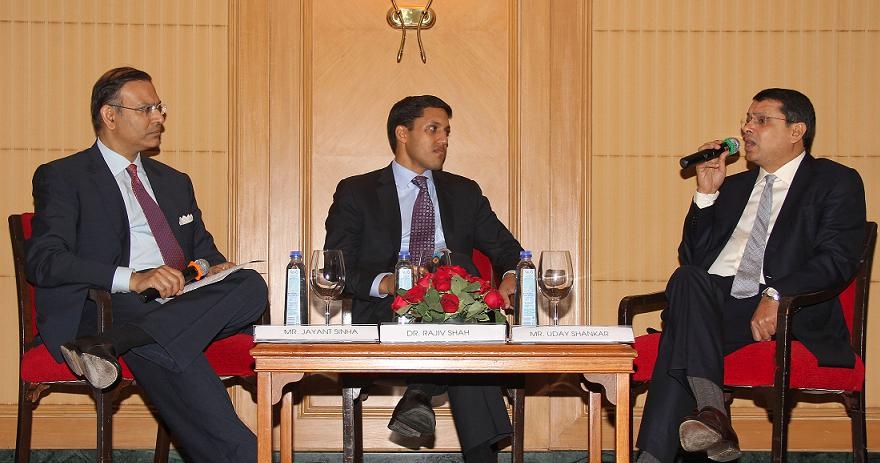 Speaking at the occasion, Dr. Shah highlighted that the USAID initiatives are “all designed towards measurable results” and that he sees a “great opportunity in India.”

Dr. Shah added that India has a great success story of bringing down child deaths. He said that USAID will soon be rolling out child survival plans that have the capability of saving the lives of 600,000 children.

In response to Sinha’s comment on the perception in India that a lot of the aid given by USAID is more geo-political than humanitarian, Dr. Shah emphasized that USAID’s “investments and stakes are aimed at creating a stable environment.” He added that “investments are designed to advance stability and prosperity and are deeply humanitarian.”

In response to a comment on the lack of platforms for development in India, Dr. Shah emphasized that today, one should not only expect the government to create those platforms. He also highlighted that many individuals are demonstrating “the clear desire for change,” such as Mukesh Ambani’s commitment as a UN ambassador for the Millennium Development Goals and the contribution of Bill Gates and Warren Buffett to development in America.

Shankar shared that STAR TV’s iconic show, Satyamev Jayate- hosted by leading Bollywood actor Aamir Khan to highlight social issues- has received over 540 million viewers and over 5 million dollars in contribution towards the social causes it has taken up. Shankar lamented that “In India, the power of the media is not used for social change,” and exhorted the private sector to support social causes in a larger and more sustained and organized way. Shankar also added that Star TV is “committed to the philosophy of creating a spectrum of choices for people and leaving the people suitably empowered to make the choices.” He said that dialogue and the exchange of ideas should be encouraged, and that certain groups should not be allowed to “hijack” the discourse in society. To overcome this, “media should provoke people” in a constructive manner.