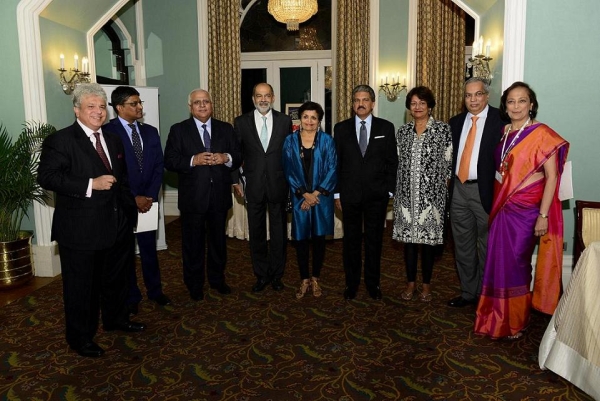 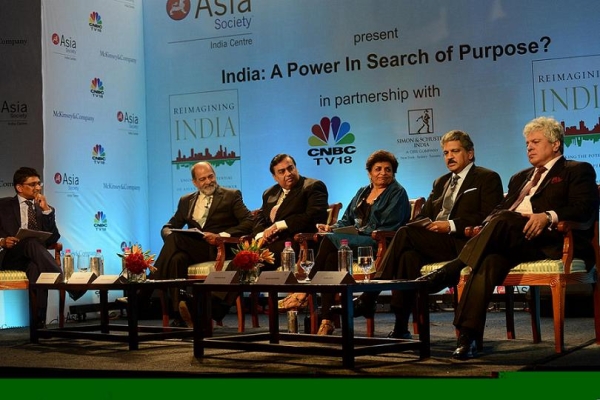 Mumbai, 12 November 2013: Asia Society India Centre, with McKinsey & Company and television partner CNBC-TV18, presented a conversation with Mukesh Ambani, chairman of Reliance Industries, Anand Mahindra, chairman & managing director of Mahindra & Mahindra, Suhel Seth, managing partner of Counselage India, Vishakha Desai, president emerita of Asia Society, and Adil Zainulbhai, chairman-India of McKinsey & Company. The discussion, “India: A Power in Search of Purpose?” was moderated by Senthil Chengalvarayan, editor in chief of Network 18 Business Newsroom, and marked the release of McKinsey & Company’s new book “Reimagining India: Unlocking the Potential of Asia’s Next Superpower,” a collection of essays by leading thinkers in business, academia, policy, and culture on what any decision maker in the private, public or social sector needs to know about modern India.

Based on insights from Reimagining India, the panel brought together a few of the book's key contributors to discuss what India should look to stand for, how it should pursue its various goals, and what role should be played by stakeholders across disciplines and fields. The conversation explored how India can evolve a vision for its future, setting itself inclusive, sustainable, and internationally
competitive standards, and incorporating the perspectives of its various stakeholders, both inside and outside the country.

Bunty Chand, Executive Director of Asia Society India Centre, said “Asia Society was delighted to present this timely discussion on what India should look to stand for on the global stage, and how it can pursue and reconcile the aspirations of its diverse citizens. The large and engaged audience interest, along with the passion with which a broad range of issues were voiced by our panellists, demonstrated the need for dialogue on this important topic. Forums such as these are crucial to serving Asia Society’s mission of forging common ground to inspire and improve the world, convening multidisciplinary perspectives to catalyse exchanges and nuanced understandings. Following the programme in Mumbai, we are also presenting discussions on this topic in New York and Washington, DC.”

The panelists covered a range of topics including the challenges and potential for India around the themes of governance, inclusive growth and development, human capital and labour, hard and soft infrastructure, the power of technology to help India leapfrog growth, and the emergence of the states and markets.

"If I think about re-imagined India, to my mind education, livelihood - the ability to earn today- and health are the three most important things before the country," said Mukesh Ambani.

Meanwhile, Vishakha Desai chose to emphasize the importance of being culturally informed;

“Culturally, our identity goes back 6000 years, and yet when we think about reimaging this new place that we’re in, we almost forget that we actually have a tremendous wealth. (…) my own feeling is the uniqueness of India lies in the fact that you can combine the cultural the economic and the political and you would actually have a power that’s what I call India 3.0”

Suhel Seth added on, making the case for the importance of values, and a re-discovery of Indian identity;

“When we grew up in school, and college, there was a subject which is now forgotten. It’s called moral science (…) you were instilled some values. You can’t build a society based on text-books, you only build a societies based on values. That Indian value, of what is uniquely Indian, is undefined and almost missing today. (…) I’m saying, revisit the India that we believe, we should have fled from, revisit the Indian ethos (…).

In dealing with a more specific issue, regarding the tension between an emphasis on academic achievement versus work experience in the education system, Anand Mahindra commented:

“Why do we have to say you will only do higher education and no job experience? (…) What we do, I think wrongly, is that when we are going through highschool our obsession with grades, and our obsession with the way in which we evaluate students prevents them from getting any spare time to go out and gain experience. I think we have to rectify that (…) and drop out this dichotomy of either (higher education) or (job experience).”

Adil Zainulbhai’s commented on the need to urge people to resist the temptations of cynicism;

“You can’t give up on a country because of three years. We have to keep trying to improve it, and if the underlying basis is pretty good then you at least have to try to change some of the things that have occurred, and make it reach its potential. If you’re trying to make something reach its potential and you would like to call it foolish optimism, hey I’m a foolish optimist.”

A large audience of leading figures in business, academia, culture, media, and policy were in attendance, with notable attendees including the likes of Leo Puri, Purnendu Chatterjee, Pheroza Godrej, Zarina Mehta, Anuradha Mahindra, Deepak Parekh, and several others.

Participants participated in an interactive Q&A session with the panellists after the moderated discussion. The programme was recorded by CNBC TV 18 for telecast.

“...there appears to be a growing consensus about the future role of the Indian state. ... The McKinsey collection gives global business leaders, once silent on the subject, a chance to voice their opinions about India.”
– Harvard Business Review, October 2013

“…a rich array of voices on what makes India both so incredible and so frustrating. ...[A] clear, illuminating study for all readers, business and academic.”
– Kirkus Reviews, October 2013

Curated and edited by management consulting firm McKinsey & Company, REIMAGINING INDIA is a comprehensive collection of essays by leading thinkers in business, academia, policy, and culture on what any decision maker in the private, public or social sector needs to know about modern India.

The frenzied optimism of the past decade for the “Indian experiment” has now given way to disappointment amongst observers of India inside and outside the country. There is mounting frustration that India’s promise could be fading. “Will India fulfill its true potential?” is the repeated refrain. REIMAGINING INDIA—a collection of 60 original new essays featuring contributors such as Bill Gates, Kumar Mangalam Birla, Mukesh Ambani, Fareed Zakaria, Eric Schmidt, Anand Mahindra, Ruchir Sharma, Viswanathan Anand, Mallika Sarabhai, Harsha Bhogle, Suketu Mehta, and many more—explores the challenges and opportunities faced by one of the most important and least-understood nations on earth.

In REIMAGINING INDIA McKinsey & Company brings together the wisdom of experts from many corners—social and cultural as well as economic and political—with the aim of creating a platform for dialogue and launching a spirited debate about the global significance of India as Asia’s next superpower. The diverse voices in this book, from business, academia, technology, the environment, and policy to culture and the arts provide rich, multidisciplinary perspectives on the country’s open, bottom-up economic, social, and political model with all its challenges: from bureaucracy, corruption, environment, and political gridlocks, to the lack of social and physical infrastructure. But despite the doom-and-gloom prophesying for India’s future, they argue that India—vibrant, chaotic, and operating simultaneously at multiple speeds—remains a genuine contender as Asia’s “other superpower”.

In the words of Bill Gates in this book, India’s promise is endless– from an abundance of life and a boisterous democracy to extraordinary business leaders and entrepreneurs. The nation’s rising economy and burgeoning middle class have earned India a place alongside China as one of the world’s two indispensable emerging markets. At the same time, India’s tech-savvy entrepreneurs and rapidly globalizing firms are upending key sectors of the world economy. India is the only experiment at scale with a fundamentally bottom-up, state-led and centrally enabled model, and as a result, development too, is a multi-layered undertaking. But at the center, reforms and progress gain momentum only during periods of crisis. So how can a billion-plus people work together and mobilise change at a pace that sustains the idea of India? What is India’s true potential, and what can be done to unlock it? These thought-provoking strategies and insights provide a roadmap to that future, and are a critical resource for all readers seeking to understand how India is changing—and changing the world.

For more information on the event, comments of the panelists and images of the programme, please contact asiasociety@asiasociety.org.in

This programme was presented in partnership with: