In the Words of Stakeholders 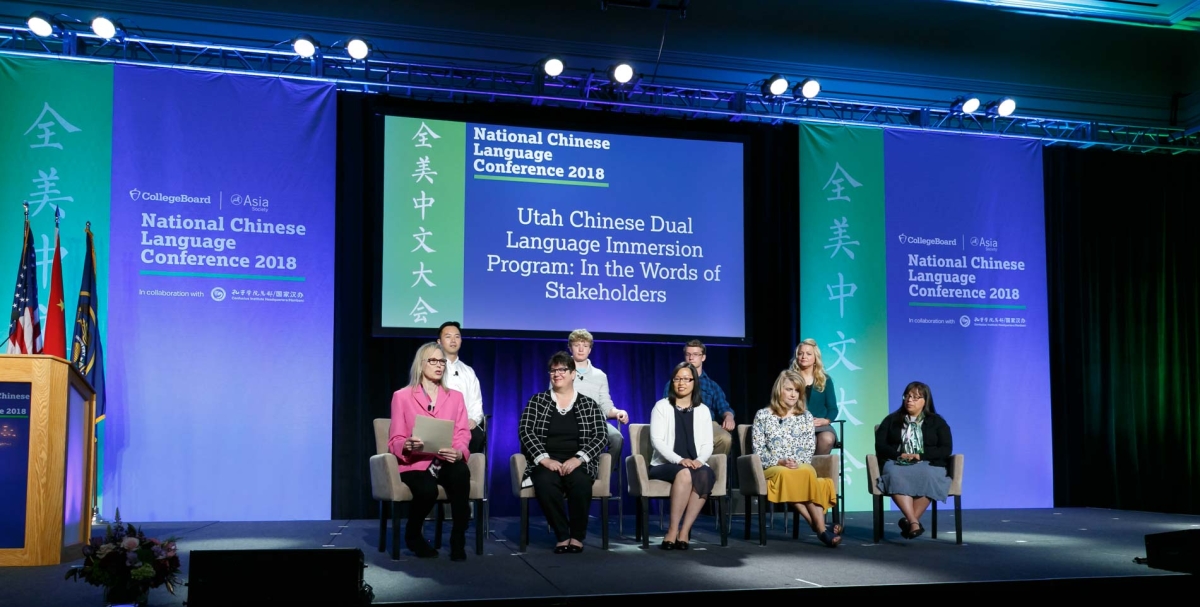 When McKay Larsen and Mark Geilman were in first grade their parents put them both into Utah’s fledgling Chinese dual language immersion (DLI) program. As six-year-olds they started learning Mandarin, a language about which no one else in their families knew a single thing.

The DLI program, celebrated at the close of the 11th National Chinese Language Conference in Salt Lake City, was the result of 2008 Utah legislation that gave a group of dedicated principals, teachers, and parents the power to begin to connect the next generation of students in this sparsely populated, landlocked state to the people and culture of the most populous country on earth and its booming economy.

“I didn’t really know what Chinese was,” said Geilman, a co-panelist and guest of the three-day event hosted by Asia Society and the College Board at the Grand America Hotel. “I just said, ‘Okay,’ and I’m really glad I did.”

Geilman and Larsen were in the first cohort of students who spent half of every day in grade school and middle school speaking Chinese only. They were learning math in Chinese, never hearing their Chinese teacher speak English—not even to their parents—and even talking about other kids in Chinese behind their backs.

“Yeah, that was something that happened,” said Larsen when asked to tell the truth about his struggles with Chinese by Stacy Lyon, Utah State Board of Education Director of the Chinese DLI program. “Sometimes,” Larsen said, “It made us feel special, because we were learning something the other kids weren’t.”

Now students at Corner Canyon High School, both Geilman and Larsen just completed the five-hour Advanced Placement® Chinese test. Geilman said preparing for the AP Chinese exam was helping in ways he hadn’t expected: “I was about to take another AP exam and I thought, ‘I just took the Chinese AP exam, so I’m not afraid of anything now.’”

Brave kids to do something not all the other kids are in to! Utah, which leads the U.S. in the number of second-languages spoken—in part thanks to the Mormon dedication to language study as a part of missionary work—now has 11,000 students in Chinese DLI programs at 55 schools. Brave state.

Those 55 schools will grow by 10 in number in the coming year, swelling the ranks of 220 brave Chinese teachers in Utah, teachers who are often brand-new to the U.S., working alongside brave English-language teaching partners to give their students a truly bicultural experience.

“I want to thank my English partner-teacher who’s had my back since day one, when there were communication issues with parents. I needed help,” said NCLC co-panelist Xiaoqian Xu, a first-grade Chinese teacher at Wasatch Elementary.

That English partner-teacher, Julie Porter, sitting right beside Xu on the NCLC stage, chimed in quickly: “Xiaoqian’s been in Utah for six years and just this morning at breakfast she asked me, ‘What are those?’” pointing to the cream-colored, superball-sized spheres in a bowl next to a plate of croissants at the hotel buffet. “’They’re butterballs,’ I told her,’” Porter recounted. “This is a program that puts you together with somebody who has to trust they can ask you any question, no matter how small, and won’t be judged.”

English teachers guide Chinese teachers in a crash course in American life and Chinese teachers impart a sense of order to their American classrooms, relying, sometimes to a fault, on a disciplinarian approach prevalent in schools back home.

“I realized if I wanted my American students to learn something I had to build a relationship with them first,” said Xu, who taught three years in a Beijing kindergarten before she arrived in a Utah classroom, where at first she expected to command unquestioning respect. “This was a turning point in my teaching. I realized I had to let the kids believe in me, love me, and like me if I wanted them to learn from me,” Xu said.

A Chinese teacher dealing with parents of young American Chinese learners is a whole different matter. Gilda Hansen, herself the child of a bicultural household (Hispanic mother, white dad), said that her two daughters thought she was in trouble every time she visited their Chinese DLI classroom in the Weber School District.

“Chen laoshi would wave me into the hall,” ensuring the kids didn’t ever see their Chinese teacher speaking English, Hansen said, brimming with gratitude as she spoke of taking her girls to Beijing, Xi’an, and Shanghai (which she pronounced as best she could) on a recent trip with their dad.

“It was a no-brainer that we wanted our kids to have a global perspective, but to see them interact in Chinese in the Xi’an classroom was so beautiful: they got to apply school to real life,” Hansen said.

Kids just want to fit in and so, by being set apart as dual language learners, their young years can sometimes feel like a slog. Teacher Yinyao You helps motivate his Draper Elementary School kids by inserting a bit of old fashioned competition into the mix, playing games with them in teams, motivating them to use Chinese in math and movement with the simple phrase: “. . . and the winner is . . .!”

“Teacher You brings an amazing energy balanced with just the right amount of structure to his classroom,” said Piper Riddle, who hired You on a recruitment trip to China in her first year at Draper. “He makes learning feel like a game. Too often I’d go visit his class and stay longer than I’d intended because I was having as much fun as the kiddoes,” said Riddle, now principal at Heber Valley Elementary.

Co-panelist Marybeth Fuller, DLI coordinator for the Washington County School District, noted that that willingness by parents and administrators to participate in and support the lives of visiting Chinese language teachers and their students was key to making the program work: “This program is amazing. It’s changing lives.”