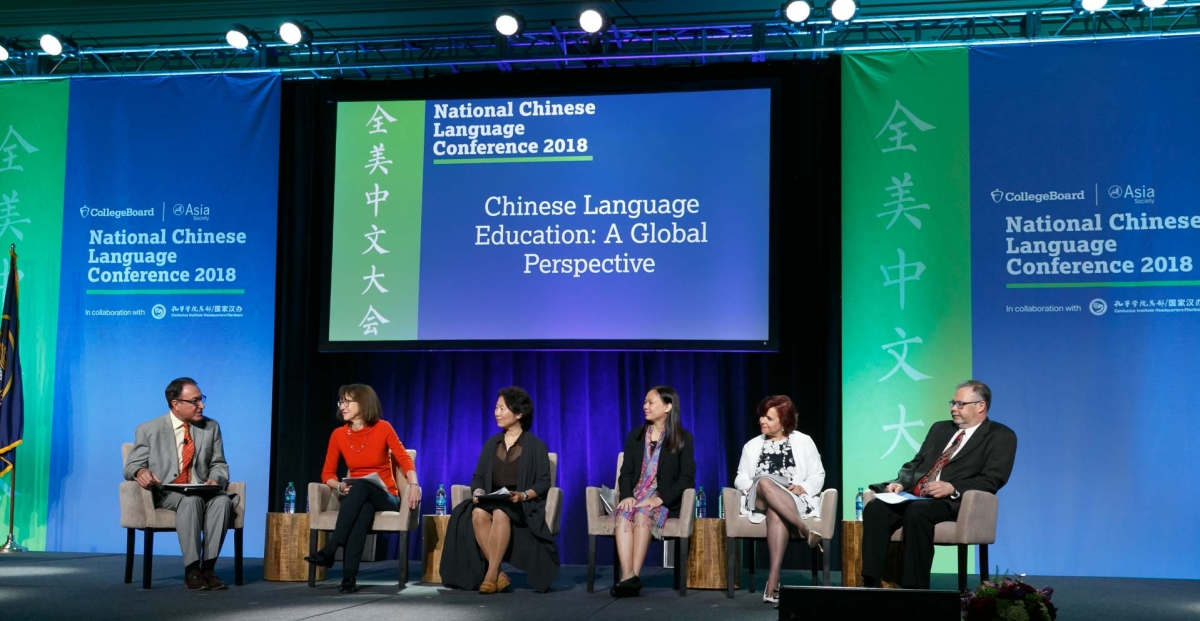 Moderator Duarte Silva, executive director of the California World Language Project, drew a discussion of best practices and hopes for the future out of the diverse bunch on stage at the behest of Asia Society and the College Board (organizers of this annual conference).

“In ten years, I hope that at the French embassy and consulates in China there will be fewer interpreters,” said Wenying Yin-Lefebvre, who manages quality control of the Chinese language instruction for five programs in northern France administered by the Académie of Paris. To get to a place where there are more French speakers of Chinese, Yin-Lefebvre said it is important to motivate Chinese language teachers to cultivate the long-standing French curiosity about Chinese culture dating back to Voltaire’s 1755 essay “A True Story of China.”

In Canada’s French-and-English bilingual province of New Brunswick—population 750,000—where 40 percent of high school students study in French, Chris Treadwell, assistant deputy minister for (Anglophone) Education Services, says the crowded curriculum makes teaching Chinese a tough sell even as it becomes necessary to keep up with the world.

“We’re a resource-rich economy that’s trying to shift to an economy of human resources,” Treadwell said, noting that policy and practice sometimes get in the way of the common sense that tells him that teaching Chinese will open up new doors to New Brunswick students. “We need to have an open public debate about why it’s important . . . no longer is Chinese just an afterschool subject. Not only should kids pick it up, they should understand its value.”

Half a world away, in tiny Singapore, where about three quarters of the population is ethnically Chinese and the language is taught as a part of the national curriculum, the challenges are different, said Teo Eng Hui of the Ministry of Education Mother Tongue Languages Branch.

“We have no natural resources but our people,” she said. And while becoming a teacher is not easy, Singapore is only as good as its people. “Put the right teacher in a classroom, and that teacher can perform magic.”

All this was hopeful talk for Densie Martins de Abreu-e-Lima, a Brazilian who leads Languages without Borders for her country’s Ministry of Education, and a newcomer to Chinese language education.

“We’re just getting going and our biggest challenge is that we’re too timid so far,” Martins de Abreau-e-Lima said, noting that Brazil’s relationship with China was strong as a fellow member of the BRICS nations, but, even with 96 institutions beginning their Chinese instruction and more than 500,00 tests proctored, “we’re way behind and must have patience.”

Patience and resilience well describe the building blocks the Mandarin Excellence language program at the University of the City of London, where Katherine Carruthers is director of the Institute of Education Confucius Institute.

“Mainstreaming Mandarin is key,” said Carruthers, who pointed out that lower-income parents in Hull, in Yorkshire, in the north of England, saw their kids getting to school early to study Chinese, which in turn had a positive effect on other subjects in school. “Local parents began to see their kids could study other languages, too.”

Treadwell identified a desire to offer Mandarin equally to all students in New Brunswick, not just those who live in its three biggest cities but those also who live in the countryside. With the help of Confucius Institutes, he said, “We have begun to use technology to address these concerns.”