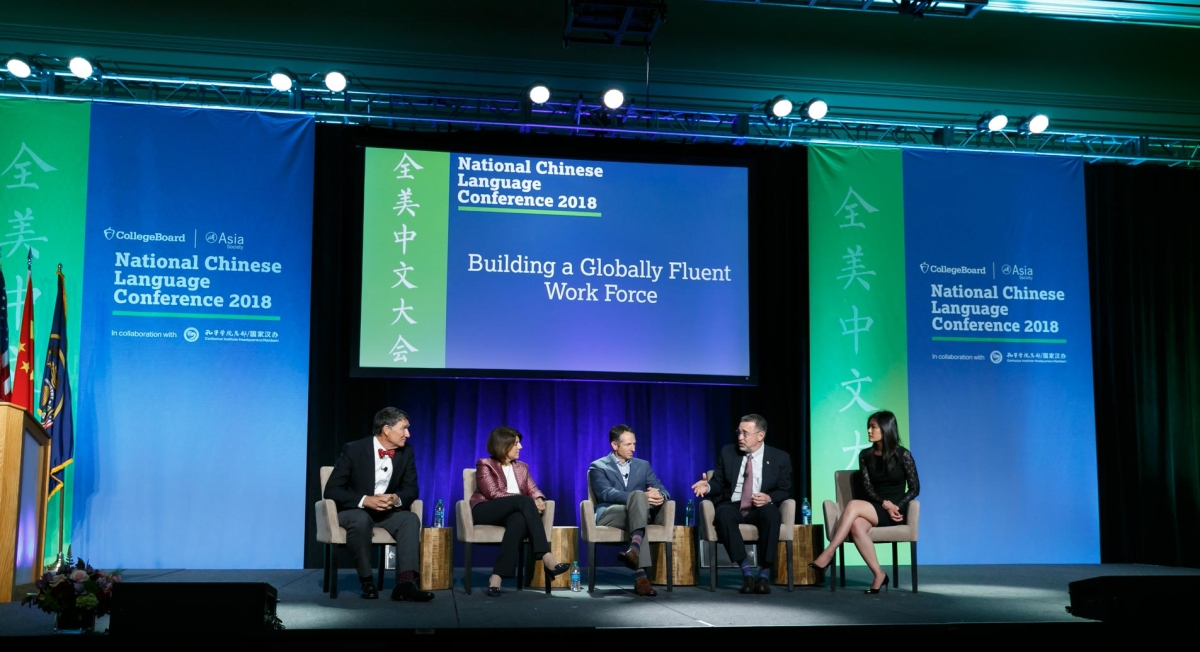 It turns out that speaking Chinese—as if that weren’t perceived as hard enough by many Americans—is no longer all it takes to get ahead in a world of increased engagement between the United States and China. Nowadays, students must also be expert in another field, able to carry themselves in that field in Mandarin.

Or so said the panelists at the lunchtime plenary session on day two of the National Chinese Language Conference in Salt Lake City, Utah, where organizers Asia Society and the College Board invited U.S.-China Strong Foundation President John Holden—himself a fluent Mandarin speaker—to moderate a discussion about “Building a Globally Fluent Workforce.”

Panelist Amy Celico, a veteran U.S. State Department official and U.S. Trade Negotiator now heading the China practice for the Albright Stonebridge Group, said every job she’d ever gotten was because of her ability in Chinese. And yet today, that skill might fall short.

“Simply having the language is not enough. It’s not just about translation of words, it’s about understanding an industry in that language,” Celico said, noting that her first job using her Chinese was as the bilingual assistant to the People’s Bank of China representative to the International Monetary Fund—a man who, at that time, didn’t speak English.

To help cultivate members of the next generation bilingual workforce to which America should aspire, co-panelist and Utah World Trade Center CEO Derek Miller (the self-proclaimed “only person in the room who doesn’t speak Chinese”) said that Utah was living proof that making a second, or third, language a part of one’s life is good for business.

Because of the overseas missionary work done by the Mormons so prevalent among Utah’s people, there are more second languages spoken in Utah than in any other state, Miller said, adding that it’s also an export state, a trade surplus state, and the sixth fastest-growing export economy in the U.S.—pretty impressive for a landlocked state of only three million people. These successes derive from the predominantly small businesspeople from Utah with language skills getting out into the world marketplace and competing, Miller said, adding that the reason why Goldman Sachs’ second largest North American office after its headquarters in New York City is in Salt Lake City. Investors from the world over can walk in and be spoken to in one of the 130 languages spoken in Utah, after English.

Cultivating that dual specialization in Chinese and another field is the flagship language immersion program at Barrett College at Arizona State University, where U.S. college students study both the Chinese language and another major in Chinese. A video shown at NCLC by five-term U.S. Congressman-turned ASU VP of Government Affairs Matt Salmon, showed young men and women talking up how their abilities in Chinese would launch them into careers in government, the military, publishing, science, and banking, among other fields.

Noting “frustrating” current turbulence between Beijing and Washington—where he was the only Mandarin speaker in Congress in the 1990s—Salmon said he’d quote the Bible for perspective: “This, too, shall pass. . . . Opportunities for both our countries will be phenomenally better if we speak one another’s language,” Salmon said, noting with a sense of the inevitable: “Look, nearly one third of the world speaks Mandarin today.”

Celico echoed the importance of more communication in this political moment, when there’s a ton of misinformation coming out of both nations’ capitals. “Because I don’t see the trade tensions being resolved any time soon, continued exposure to one another is more important than ever before,” Celico said.

Also helping to bridge the divide between the U.S. and China with language at the very grassroots level is co-panelist Wenchi Yu, a veteran of the U.S. State Department, Congress, and Goldman Sachs who’s now head of global public policy at the bilingual online education company VIPKID. The four-year-old start up matches students and teachers of both English and Chinese through an innovative online platform in real time.

“I have a deep commitment to promoting cross-cultural communication,” Yu said. “So many times I've seen misunderstanding, because of a lack of language, lead to bad decision making. Now, we have to make learning Mandarin fun and young.”

Salmon chimed in to support VIPKID’s work: “Companies like that will do more for diplomacy than any government program ever could.” And Miller recalled the astonishment and glee on the faces of a delegation of Chinese provincial governors visiting Salt Lake City a few years ago upon being serenaded in Chinese by a chorus of the very youngest students from Utah’s Mandarin immersion program. “We began our language immersion program as an economic imperative, but it’s become a human imperative,” Miller said.

All this was a lot to think about, and a far cry from the introduction to the lunchtime panel discussion offered up by Jeff Wang, head of Asia Society’s China Learning Initiatives. Asking the audience first to observe a moment of silence for the victims and witnesses to mass shooting Friday morning in Santa Fe, Texas, Wang then invoked hope that soon it wouldn’t be a luxury for parents and teachers to imagine their children and students living safe from gun violence in America.

Wang then reflected that life-long music enthusiast and Nobel laureate physicist Albert Einstein, when writing to a friend in 1951 as the world was recovering from WWII and entering into the Cold War, wondered aloud what might help mankind in the face of such darkness recapture the wonder of being alive in nature. “Does music still belong in that untouchable sphere? I believe so, so long as one is not a professional musician.”

Wang’s is a hope that people studying Chinese will tap in with passion for progress, not perfection, as a means to live better, to be better versions of themselves, and expand their lives without worrying about credentials.

The NCLC, after all, Wang said, is designed not so much to preach to the converted—the roughly one percent of American students who are studying Chinese—but rather to empower the teachers gathered in the room to reach the other 99 percent.

Wang, a China-born naturalized American who works tirelessly to promote language exchange, seemed to be saying, on a personal note, with echoes of Einstein: May the 99 percent forever remain non-professionals and yet find peace and beauty in being a part of a greater humanity through an ability to speak Chinese.