#TBT: In 2002, Wenji Opera Explores Themes of Dislocation and 'Biculturalism' 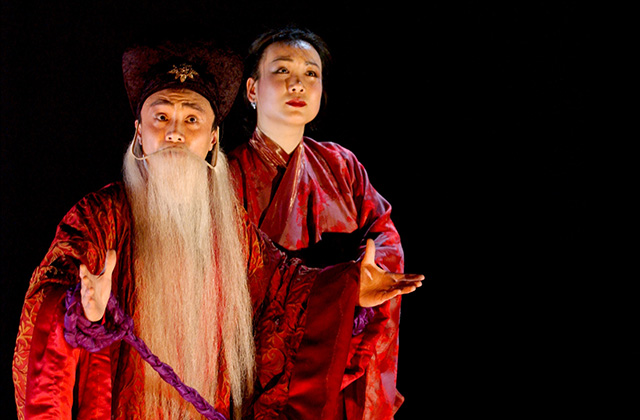 A scene from the chamber opera Wenji: Eighteen Songs of a Nomad Flute with actor Zhou Long (L) and actress Xiu Ying in 2002. (Jack Vartoogian/Asia Society)

In early 2002, Asia Society produced a contemporary opera titled Wenji: Eighteen Songs of a Nomad Flute based on the true story of poet and musician Cai Wenji (also known as Cai Yan). In the late 2nd century, Cai, the daughter of a famous Han Dynasty scholar, was captured as a prize of war by invading Eurasian nomads and held for 12 years. After getting married and bearing two children, the Han Dynasty paid a ransom for her return and she was forced to leave her two children behind.

Though based on the well-known ancient Chinese story, the 2002 opera's themes of displacement and being torn between two worlds transcend time. "The whole situation of her being a woman and being kidnapped during a war seemed to relate to the contemporary world in which we live," said composer Bun-Ching Lam in an interview. "Women still have no choices. They are commodities, and whenever there is a war they are [moved around]."

The performance was sung in both Chinese and English and incorporated Chinese and Western opera styles and instrumentation. The idea was to encapsulate the straddling of traditions that's inherent in a nomadic life, while becoming "bicultural" in the process — as the character of Wenji was forced to do. It was a theme lived out by the opera's director, Rinde Eckert. "Even though I am a native-born American, I have had great difficulty identifying my culture," Eckert said. "I don’t identify with the bourgeois aesthetics of America. I tried to take refuge in European culture by studying classical music, but that didn’t feel at all like home either. I finally relegated myself to the fact that I was a nomad."

The opera premiered in New York City and was later performed in Hong Kong. In the above photo, actress Xiu Ying plays Wenji along with actor Zhou Long as her father. Watch clips from the performance in the below video.

Each week for "Throwback Thursday" (#TBT), we'll reach into our archives to find a photo from the organization's 60-year history. Some photos will feature important moments, some will feature important people, and others still will just be photos we love. Do you have an Asia Society photo you'd like us to consider including in this series? Please email the photo and any related details to photos@theasiablog.org (we regret that we won't be able to respond directly to each inquiry).