#TBT: In 2001, 'Floating Box' Explores the Stories of Chinatown 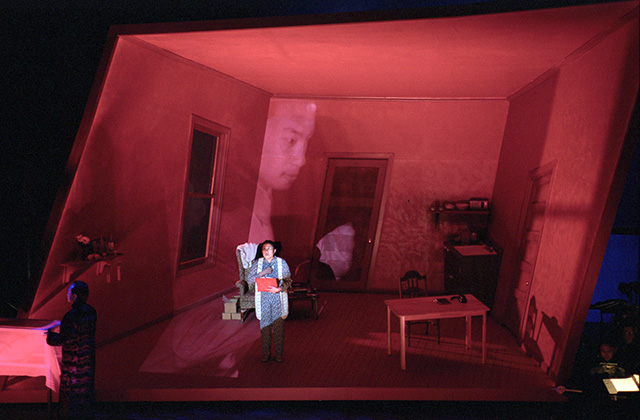 A scene from 'Floating Box: A Story in Chinatown' in 2001. (Jack Vartoogian)

In October 2001, Asia Society in New York produced and hosted The Floating Box: A Story in Chinatown as the inaugural program in a season celebrating the opening of the Asia Society Museum after renovations to the Park Avenue headquarters.

The performance, co-presented with the Museum of Chinese in the Americas, was a chamber opera that incorporated both Chinese and western instruments with influences as diverse as jazz, samba, Gregorian chant, and Chinese music. The work was developed and composed by Asia Society's then Composer-in-Residence Jason Kao Hwang over three years with a grant from the legacy organization Meet the Composer. With liberetto by Catherine Filloux, directed by Jean Randich, and produced by Rachel Cooper, the opera “charted the journey of one immigrant family over continents, languages, and generations.”

The story follows a Chinese American raised in the U.S. who confronts a forbidden "box" of images in the wake of her father's death, shedding light on her immigrant family's past. The storyline was based on over 50 hours of real-life interviews with Chinese-Americans living in New York’s Chinatown. “We were stunned by how many of the people we recorded shared their family's history with such emotion and honesty,” recalled Hwang in an interview at the time. “The recordings became a medium through which they honored their past. The Floating Box: A Story in Chinatown has given them voice by weaving elements of their lives into this original story.”

In the above photo from the performance, an actress stands in the metaphorical "box" as images from the past float by. The below video shows a segment from the opera, which was later compiled into an audio CD.