The Removal of South Korea's President 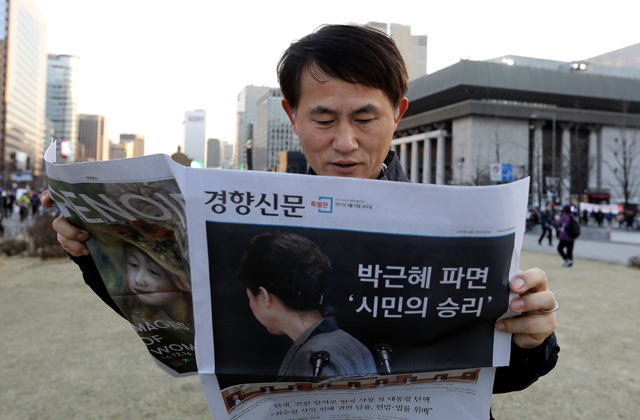 Four months after the country's legislature voted to impeach President Park Geun-hye, a South Korean court has formally removed her from office, setting the stage for a period of uncertainty across Northeast Asia. From the New York Times:

With the conservatives discredited — and no leading conservative candidate to succeed Ms. Park — the left could take power for the first time in a decade. The dominant campaign issues will probably be North Korea’s nuclear weapons program and South Korea’s relations with the United States and China.

If the opposition takes power, it may try to revive its old “sunshine policy” of building ties with North Korea through aid and exchanges, an approach favored by China. That would complicate Washington’s efforts to isolate the North at a time other Asian nations like the Philippines are gravitating toward Beijing.

For South Korea, the implications are profound: At a moment when the nation craves stability and seeks assurances from the incoming Trump Administration in Washington (as a candidate, Donald Trump bluntly called into question the U.S. security commitments to South Korea), the country instead finds itself in crisis. The government is effectively paralyzed with little clarity as to the prime minister's powers. Diplomats worry they will miss critical opportunities to manage relations with the Trump team. Closer to home, the nightmare scenario involves a North Korean provocation with chaos at the helm in Seoul.

Park, the daughter of former South Korean dictator Park Chung-hee, made history by becoming her country's first female leader in 2012.