Park Geun-hye Is Impeached: What's Next for South Korea? 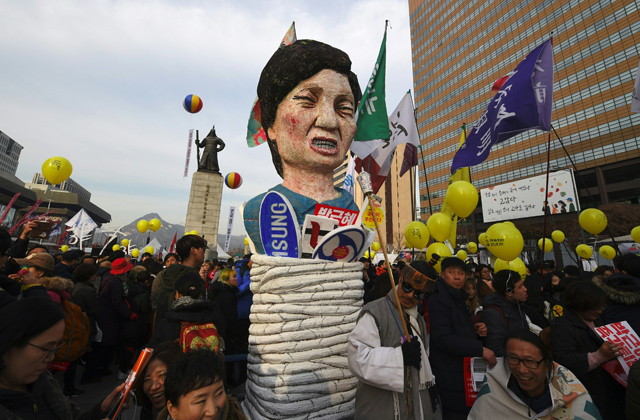 Protesters carry an effigy of South Korea's President Park Geun-Hye during a rally against Park in central Seoul on December 3, 2016. (Jung Yeon-Je/AFP/Getty Images)

It was a strange experience: I left the United States at a time of political division and upheaval, only to travel to South Korea where upheaval was actually threatening to bring down a president. It was stranger still to open an Asian Young Leaders conference in Seoul and a session titled "Resilient Leadership in Uncertain Times" just as the Korean National Assembly was taking up the impeachment of President Park Geun-hye.

The impeachment vote passed by a wide margin, 236-56, sending the president's fate to the nation's constitutional court — and South Korea into crisis. The court must now rule within 180 days whether Park will stay in office, but in the meantime the vote immediately strips her of her powers, leaving the country's prime minister, Hwang Kyo-ahn, in charge until the court reaches its decision. And while opposition politicians won the vote, many are not satisfied. They want Park to resign immediately and many are saying they will challenge the authority of the prime minister.

The vote is almost certain to be the final blow to Korea's first female president, who came to power pledging to grow the economy and open a more constructive relationship with North Korea. She was strongly supported by older Koreans who had admired her father, the strongman Park Chung-Hee. But under Ms. Park, the long-simmering conflict with the North has only grown more tense and dangerous, and the South Korean economy has actually shrunk. If these were developments beyond her control, the aftermath of a ferry disaster in 2014, when Park was accused of a slow and ineffective response, was not.

But the issue that ultimately felled the president had nothing to do with a disaster, the economy, or the North Koreans. It involved the daughter of a long-time friend and confidante of Park's and accusations that their relationship had led to influence-peddling and corruption. Prosecutors charged the woman, Choi Soon-sil, with using her ties to the president to pressure major South Korean companies for donations, in exchange for influence.

President Park denied the charges, then issued a series of apologies and pledges to step down before the end of her term. But street protests swelled, more details emerged, and Park's already-anemic approval ratings fell in early December to a stunning low of 4 percent.

For South Korea, the implications are profound: At a moment when the nation craves stability and seeks assurances from the incoming Trump Administration in Washington (as a candidate, Donald Trump bluntly called into question the U.S. security commitments to South Korea), the country instead finds itself in crisis. The government is effectively paralyzed with little clarity as to the prime minister's powers. Diplomats worry they will miss critical opportunities to manage relations with the Trump team. Closer to home, the nightmare scenario involves a North Korean provocation with chaos at the helm in Seoul.

A resolution might come sooner if Park steps down and new elections are held. (Ban Ki-Moon, the outgoing U.N. Secretary-General, has been named as a potential successor). But Park has insisted she will stay on and wait for the court's deliberations to run their course.

On the eve of the impeachment vote, the chairwoman of the opposition DPK Party, Choo Mi-ae, called the vote a "critical moment in history" that offered South Korea "the only way to normalize state affairs." That may prove true in the long run. But for now, the South Korean ship of state looks anything but sturdy. As the CEO of a Korean media company told me, "the last thing we need right now is weak and unclear leadership. We need a strong and clear direction." For the moment, and perhaps for the next several weeks and months, such clarity may prove elusive.