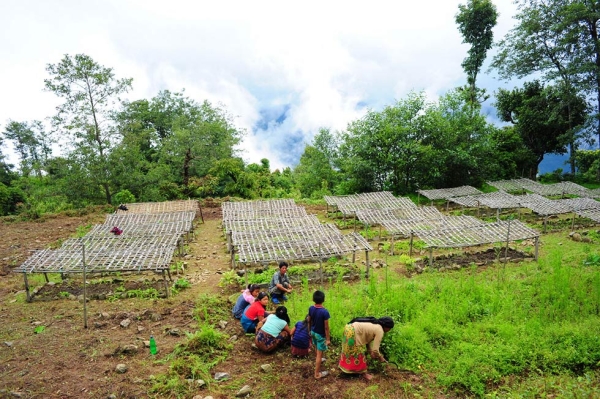 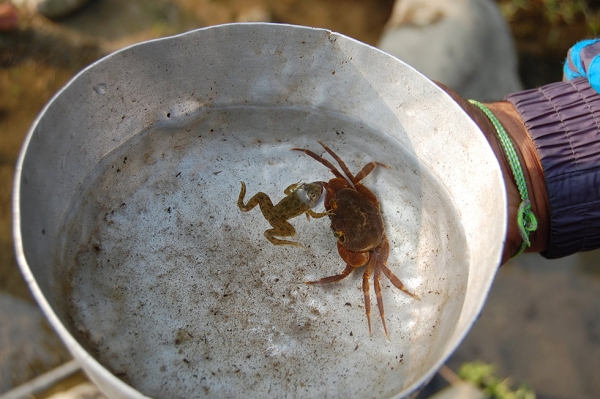 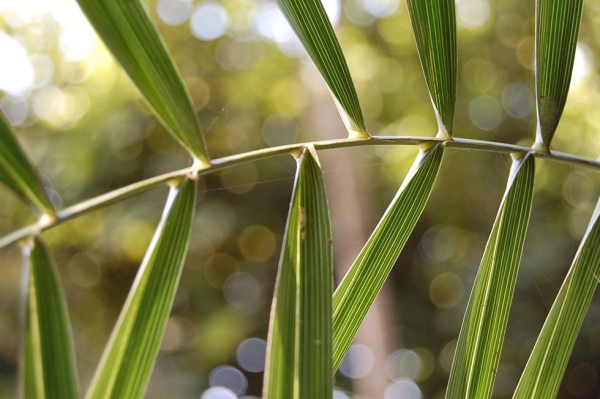 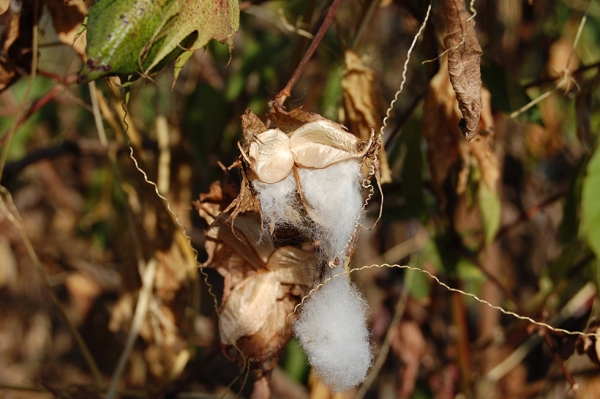 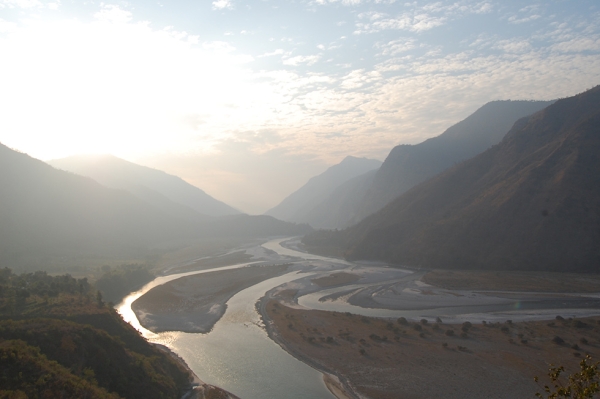 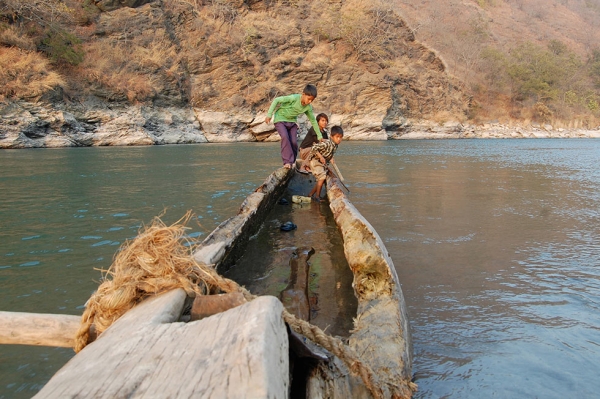 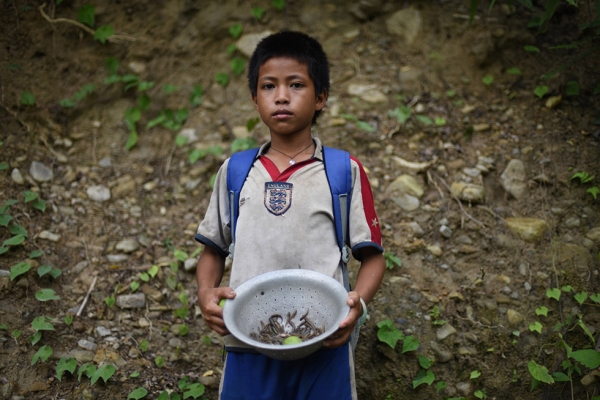 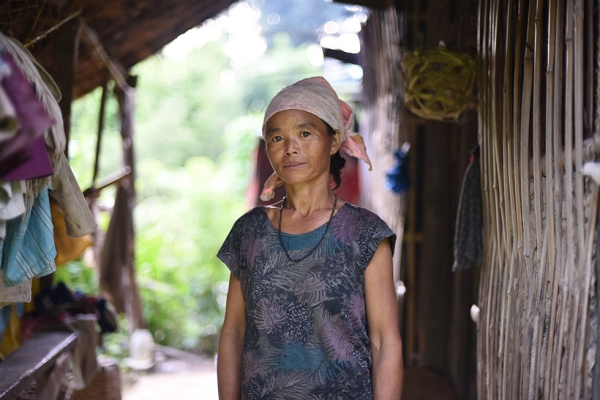 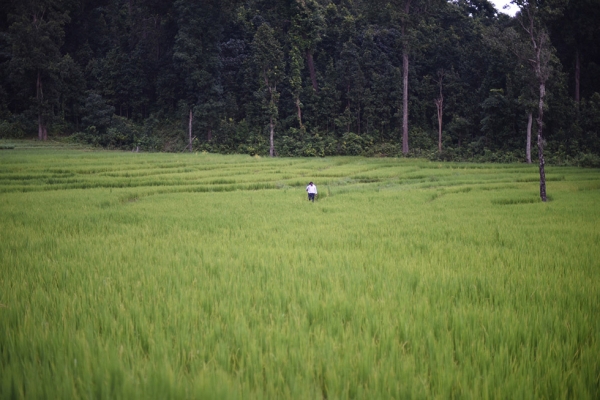 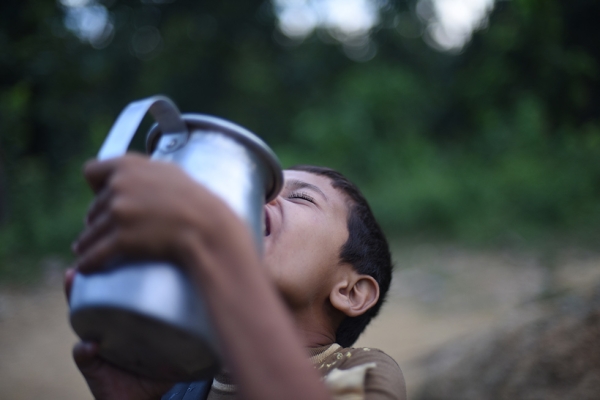 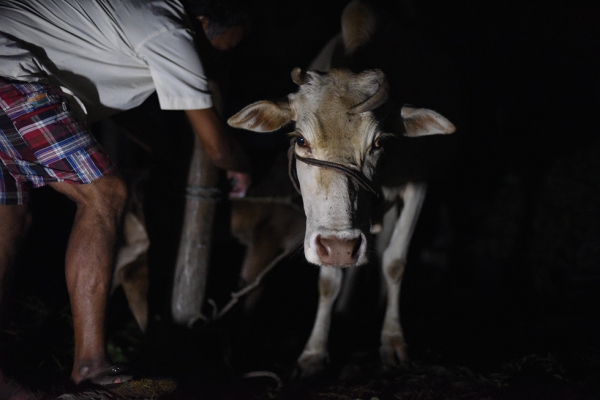 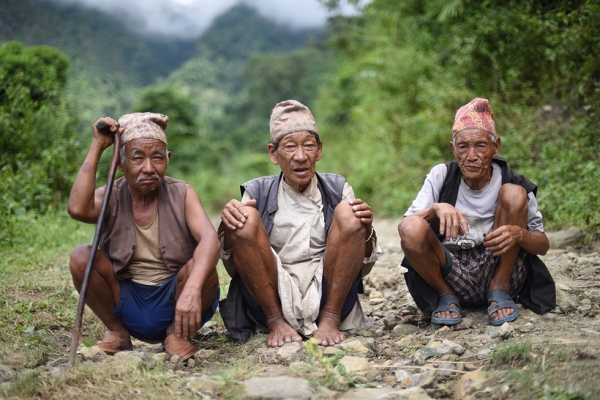 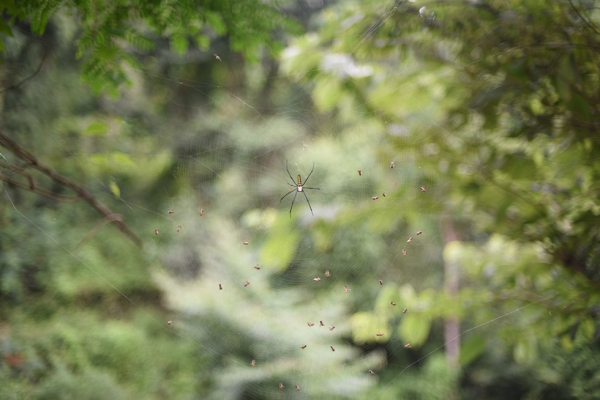 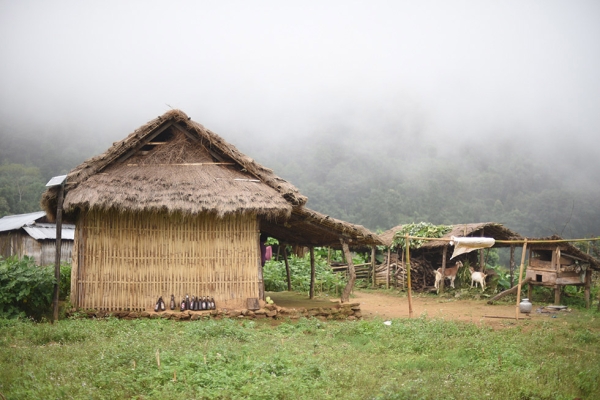 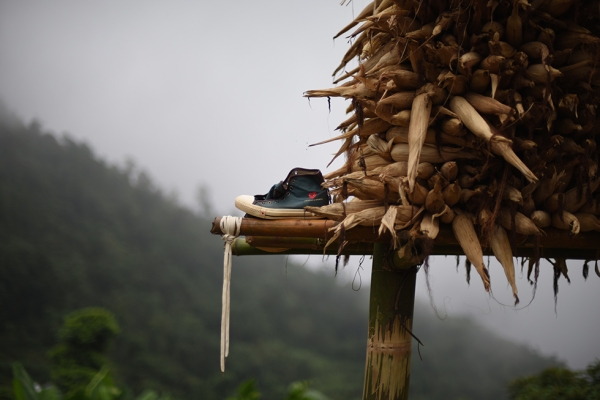 In the years between 1990 and 2005, Nepal lost 4,500 square miles of forest — 25 percent of the country's overall forest cover — through a combination of haphazard urbanization, a lack of sustainable economic alternatives, inadequate support to organic farmers, and the adverse impacts of climate change. This change has worsened Nepal's natural springs systems and, in turn, the livelihoods of the country's farmers.

Asia 21 Young Leader Rajeev Goyal first started working in Nepal more than a decade ago as a Peace Corps volunteer in 2001. An activist, lawyer, and rural-development worker, Goyal started monitoring Nepal's environmental issues early on and, over the next decade, frequently found himself in the country working on a variety of projects.

In 2013, Goyal teamed up with the Canadian architect and planner Priyanka Bista and a local teacher and conservationist named Kumar Bishwakarma to create the Koshi Tappu Kanchenjunga Biodiversity Education Livelihood Terra-Studio (KTK-BELT), an organization seeking to educate people about conservation and Himalayan biodiversity while creating ecologically-sensitive livelihood opportunities.

Goyal and KTK-BELT have now undertaken a massive project to build a "vertical university" from Koshi Tappu, Nepal’s largest aquatic bird reserve, to Mount Kanchenjunga, the ​third tallest peak in the world. We reached out to Goyal via email to find out what a ​vertical university is and​ ​how it will conserve Nepal's environment and biodiversity.

Can you describe what a "vertical university" is?

The idea of the vertical university is actually quite simple. It is to create a sort of "living classroom" in the form of an 25,000 foot continuous vertical forest corridor stretching from Koshi Tappu (220 feet), Nepal’s largest aquatic bird sanctuary, to Mt. Kanchenjunga (28,169 feet), the world’s third tallest peak, as a vessel to teach and conserve the 6,600 flowering plant species, 800 bird species and 180 mammals that are found in eastern Nepal. In a mountainous country like Nepal, where there is exceptional biological, climatic, and cultural diversity from the tropical plains to the alpine Himalayas, conventional education paradigms where students sit in a stationary classroom, divorced from their surroundings, make little sense.

The "professors" of the vertical university may not have a Ph.D. and in fact may never have set foot in school, but as indigenous farmers, they possess intricate, intergenerational knowledge about local fauna and flora which is critical for Nepal’s youth to attain. The vertical university will deepen place-based skills in sustainable technology, craft, and medicinal plants, and seeks to conserve and activate local knowledge while also creating sustainable livelihood opportunities. It does this through establishing "learning grounds," which are micro-conservation hubs — the "classrooms" of the university throughout different locations across the landscape.

The objective is that one day, a Nepali student could walk from Koshi Tappu to Kanchenjunga, across 118 different forest types, and learn from local farmers about the deep physical and biological diversity of the landscape through place-based education. The objective is not to radically alter the existing government curriculum, which is actually quite comprehensive, but to enrich it with pragmatic, sensory learning opportunities that integrate hundreds of villages across a vertical gradient.

In the last few decades, deforestation, loss of natural habitats and the impacts of urbanization have affected many nations around the world. Why did you choose to focus your attention on Nepal?

Deforestation, degradation of biological diversity, and loss of the "wild" are challenges not unique to Nepal, but rather imperil all of Asia. The predominant trend is that forests are being converted into monocultures to grow palm oil or other bio-fuels and cash crops. Old growth forest, wetlands, and other fragile ecosystems which took millennia to evolve and mature are being hacked down and converted into monocultures or urbanized settlements without a second thought. Those that stand the most to lose, in terms of ecosystem services, livelihood opportunities, and educational possibilities, are rural youth, and yet no one is really asking what the role of government schools should be in conserving these resources.

Land use conversion and habitat degradation in Indonesia and Malaysia may actually be occurring at an even quicker and more destructive pace than in Nepal. China has less than one percent of its original forest cover under protected status. Many of these "forests" are simply wood lots for commercial purposes. Cambodia has experienced huge amounts of deforestation in the Cardamom Mountains. The challenges are everywhere. I have chosen to work in Nepal because, having been a Peace Corps volunteer here and worked on various types of projects for a number of years, this is the context that I know and have monitored and where I feel I can help. I have met extraordinary people in Nepal such as Kumar Bishwakarma, a local teacher and conservationist, who helped safeguard 100 acres of biodiversity-rich land to build the first prototype of the vertical university in Yangshila, Morang, within the Siwalik foothills of eastern Nepal. As a post-disaster and post-conflict country facing increasing threats from climate change disasters, it’s also the ideal place to pilot the university.

Another reason our team is so focused here is that Nepal is experiencing an environmental emergency. Between 1990 and 2005, Nepal lost over 4,500 square miles of forest, or 25 percent of its total forest cover in just 15 years. The annual rate of deforestation continues to be 1.7 percent, which means that if nothing is done the forests will continue to decline by one-quarter every 15 years or so until it is gone. Eastern Nepal is one of the world’s 34 biodiversity "hotspots" which has more endemic and rare species that most places on earth, including many that are listed on the IUCN Red List as under critical threat. New species continue to be discovered in the Himalayas each year. With much of the attention focused on the April 2015 earthquake, it is easy to overlook that there is a silent crisis occurring with the nation’s habitats and biological diversity.

Nepal is a paradoxical country. Everywhere there are shortages of energy, water, fuel, and supplies. Yet few places in the world are endowed with more natural resources, physical diversity, and diversity of culture and languages. It’s also a country where schools and education are deeply valued. Putting all of this together, we feel it is the perfect melting pot to realize an idea like this.

Your organization, KTK-BELT, has launched a very ambitious project in Nepal to conserve and teach people about biodiversity. Can you describe the project and the steps you are taking to to achieve this? What have been some of your greatest challenges so far?

KTK-BELT, which I helped co-found with Priyanka Bista, an architect from Canada, works very closely with local communities to help establish learning grounds at the village level, as conservation associations to safeguard threatened habitats. We establish these land plots at different elevations, in different micro-habitats, which in the aggregate help restore habitat connectivity. The learning grounds are plots organized around principles of agro-forestry and permaculture design, where trees cannot be cut down and only organic inputs are permissible.

Currently, we are working in a Village Development Council (VDC) called Yangshila, where we have established 28 learning grounds. Each plot responds to a different conservation need. For example, a plot in a tropical village called Rangcha is focused on the conservation of tropical fruit diversity. In Dahar, a bird-rich area with more than 100 species including the Great Indian Hornbill and Himalayan Vulture, the plot will be designed to deepen this bird diversity. In another plot in Chiuri Bhanjhyang, the aim is to conserve wild ornamental plants.

Bista, who oversees the design and planning arm of the project, is training rural youth in biodiversity mapping, sustainable design, construction methods, and other skills, so that each learning ground is designed by local youth and indigenous farmers and bridges traditional knowledge and modern attributes. This work is challenging because it requires training and capacity building and takes a great deal of time and exposure to change mindsets.

One challenge has been acquiring funding and capital, but we’re starting to get broader support. Recently we turned to crowd funding to share our idea with a global audience and launched a Kickstarter campaign to raise $100,000 before February 24. The idea of the vertical university is also starting to acquire endorsements from the global conservation community, and we recently were awarded the UIAA Mountain Protection Prize in Seoul. If we had major new resources, we could expand the BELT all over eastern Nepal, as we now feel we understand the process and how to go about it.

What are the goals of this vertical university in Nepal?

The goal is ultimately to change perceptions and shift attitudes. We want to make people see that environmental conservation, livelihood, and education are not mutually exclusive, but that each can fortify the other to achieve a much deeper level of sustainability through harnessing diversity. The word "diversity" is overused in our world and often utilized in the context of race, socioeconomic standing, or nationality, but there is a deeper level of diversity, which is the basis of our culture, imagination, and art. We hope that the vertical university will speak for itself and that when people walk in this landscape and see the transitions as they move further up along the BELT, they will realize that any development strategy should emanate from and actually further this mega-diversity.

What can other nations with growing environmental concerns learn from KTK-Belt? Can the methods you're implementing in Nepal be replicated or adapted elsewhere?

In some ways, a vertical university in a place like Myanmar, for example, where there are snow-capped mountains and a 1,200-mile tropical coastline, could be even more dramatic and more fitting. Bhutan has expressed interest in the idea of creating a "golden walk" themed around birds and bird habitat and modeled on the vertical university concept. We can easily see this being adapted to any country in Asia, including archipelago nations like the Philippines, where the BELT could be oceanic and underwater. The threats, opportunities, issues and challenges are similar across different contexts. The core idea behind the vertical university — the notion of embracing diversity and place-based education — would be relevant throughout Asia.

Our dream is that one day there would be a continuous forest corridor cutting across many countries, going up and down mountains, linking wetlands and rivers. An inspiration for this project was actually the "Re-Wilding Europe" project in the Netherlands, which sought to create a land trust to revive lost species, and which will cut through different countries in Europe. An Asia vertical university could be comprised of thousands of learning grounds, each doing its bit at a local level to conserve species, as well as sub-species agro-biodiversity.

At the same time, having worked on our prototype in Nepal for several years now, it is very hard work and there is no substitute for spending vast amounts of time to map and understand indigenous knowledge. Local people, including women, elders and youth, must be involved at each step so that it has depth and local people feel ownership of it.

Of all the environmental issues that the world is facing, which one, in your opinion, most requires our attention?

That’s an easy question! The disruption of large, intact, undisturbed, wild habitat, whether it be terrestrial or marine.