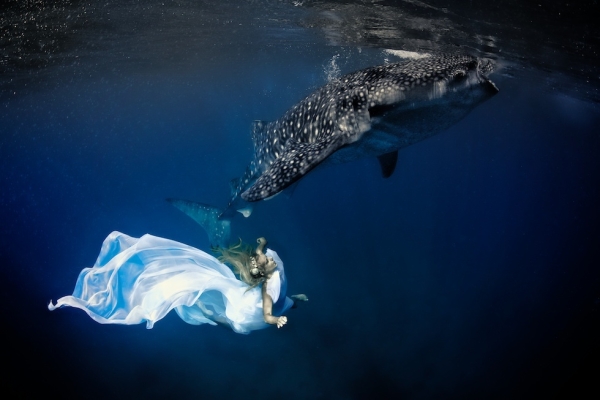 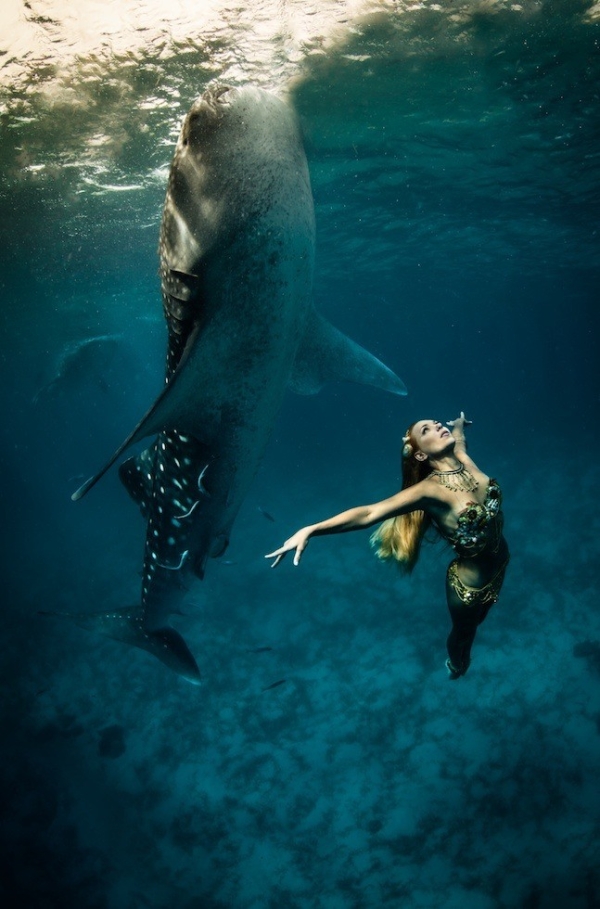 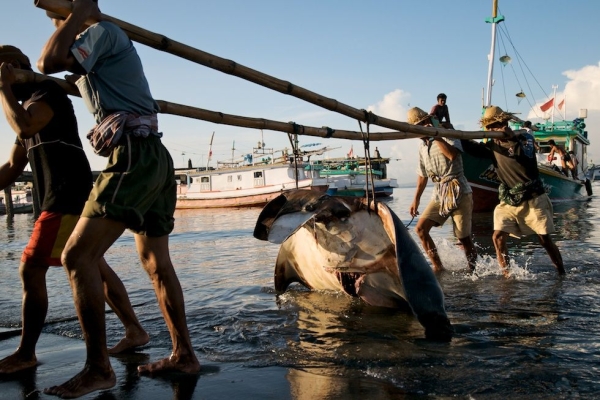 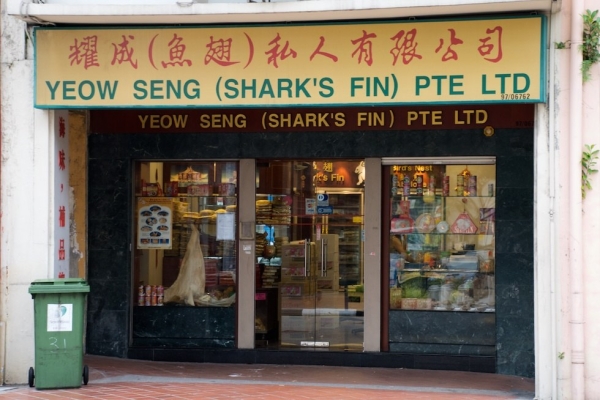 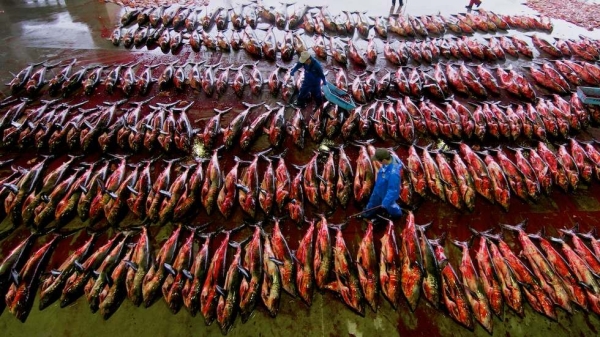 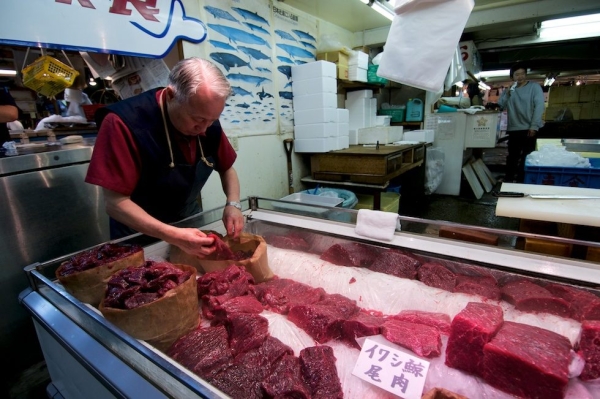 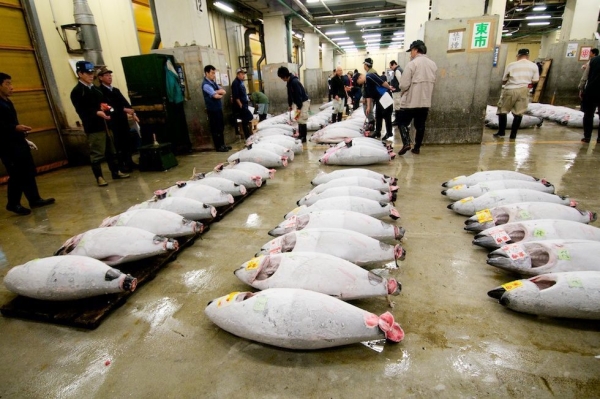 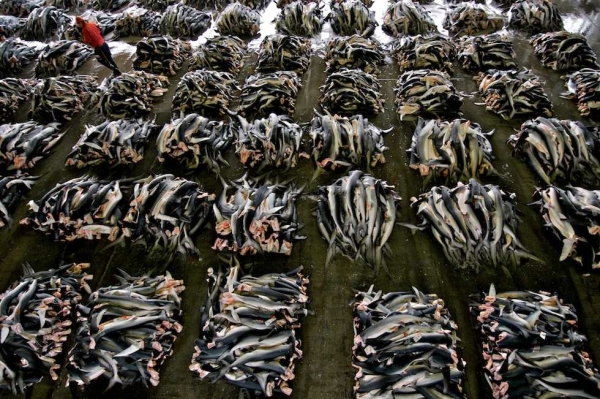 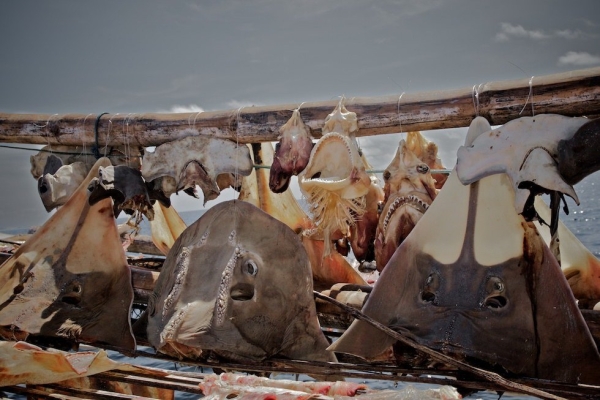 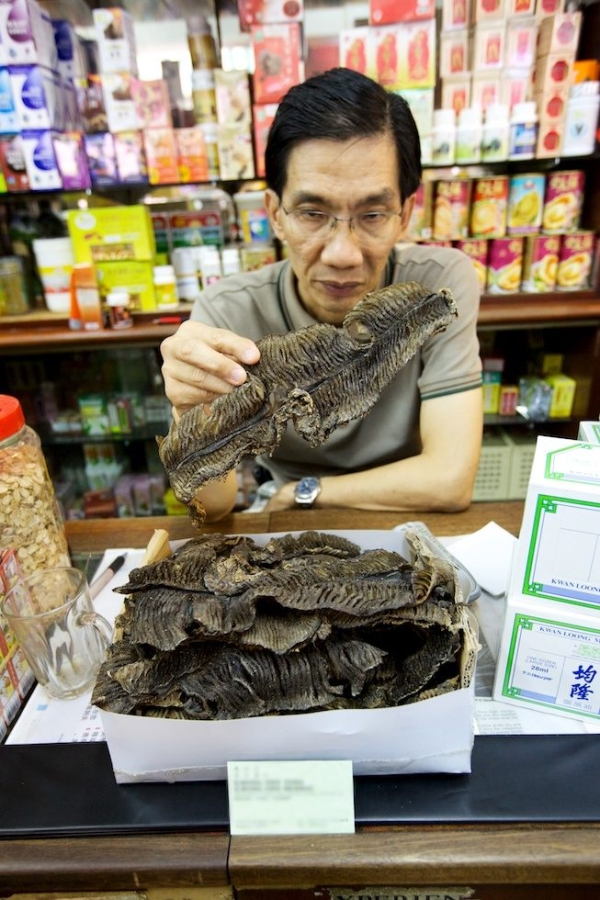 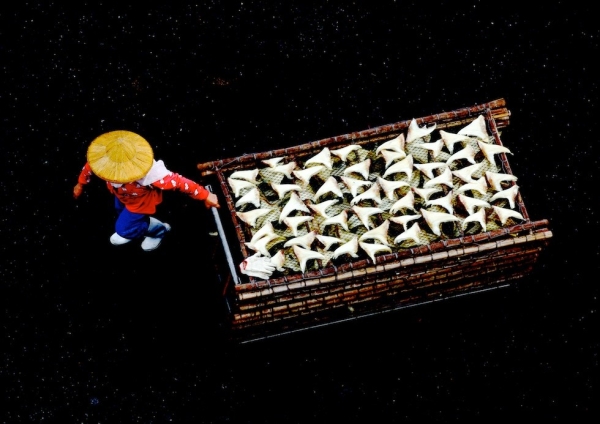 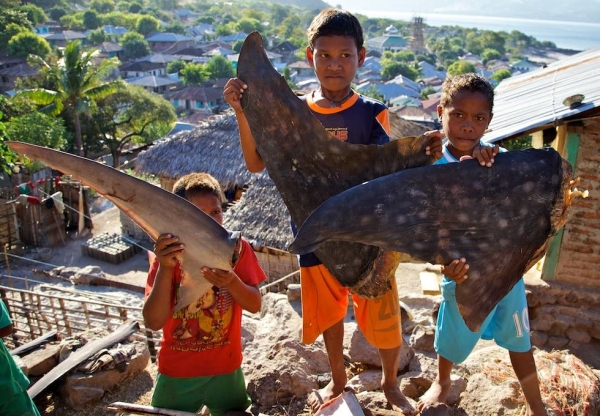 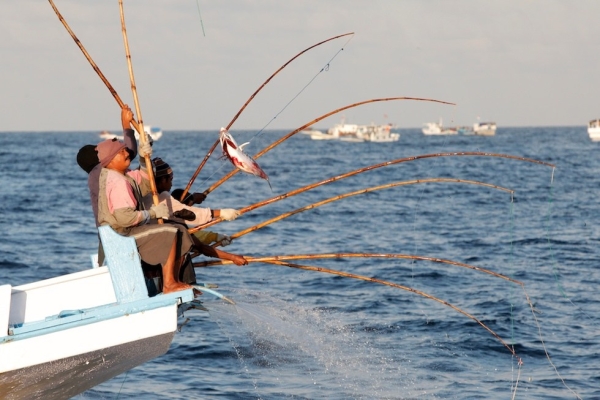 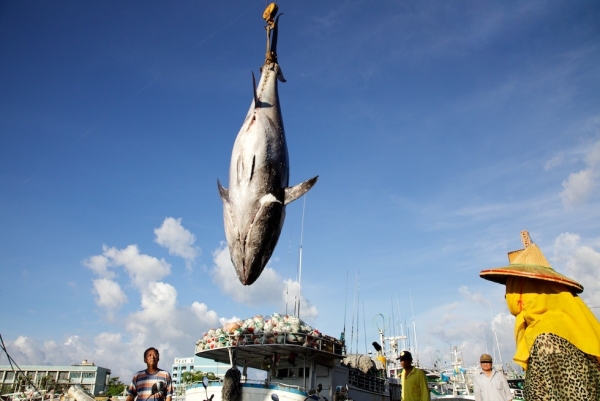 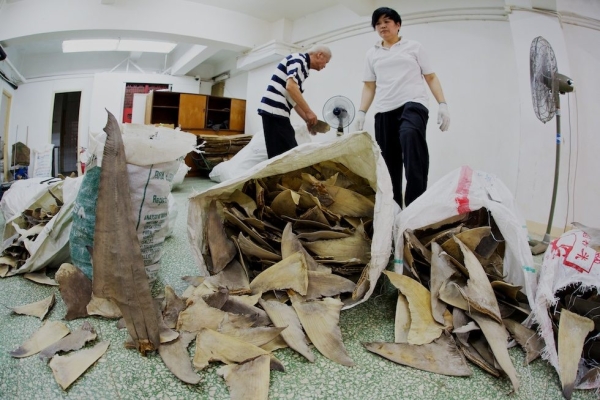 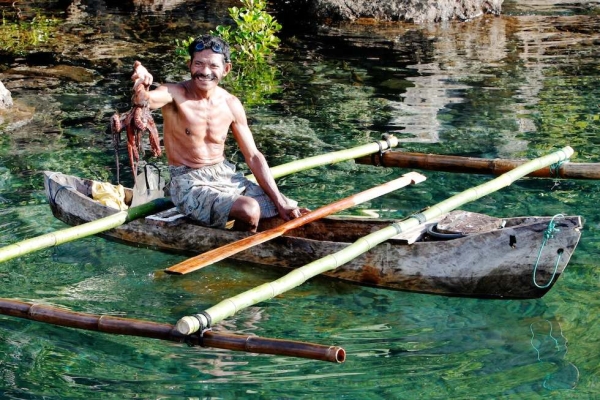 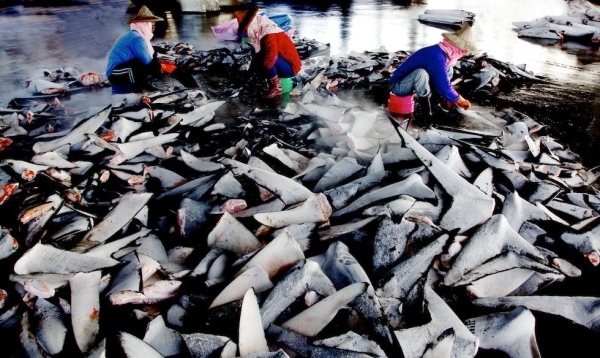 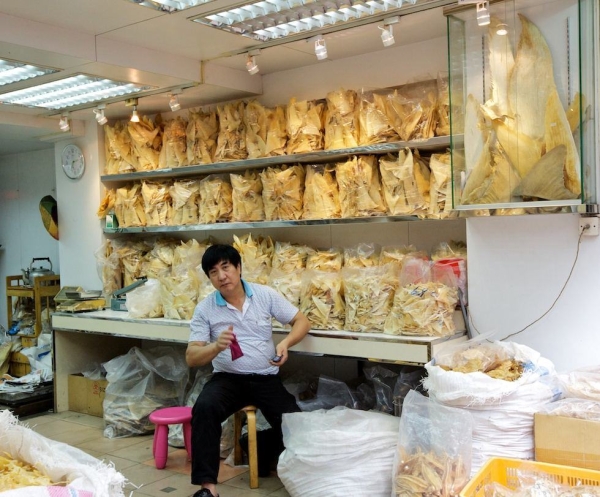 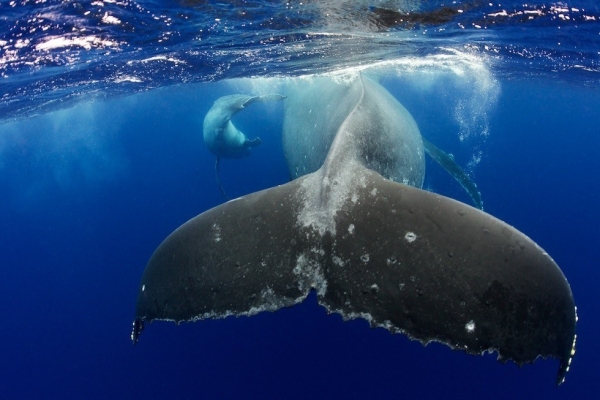 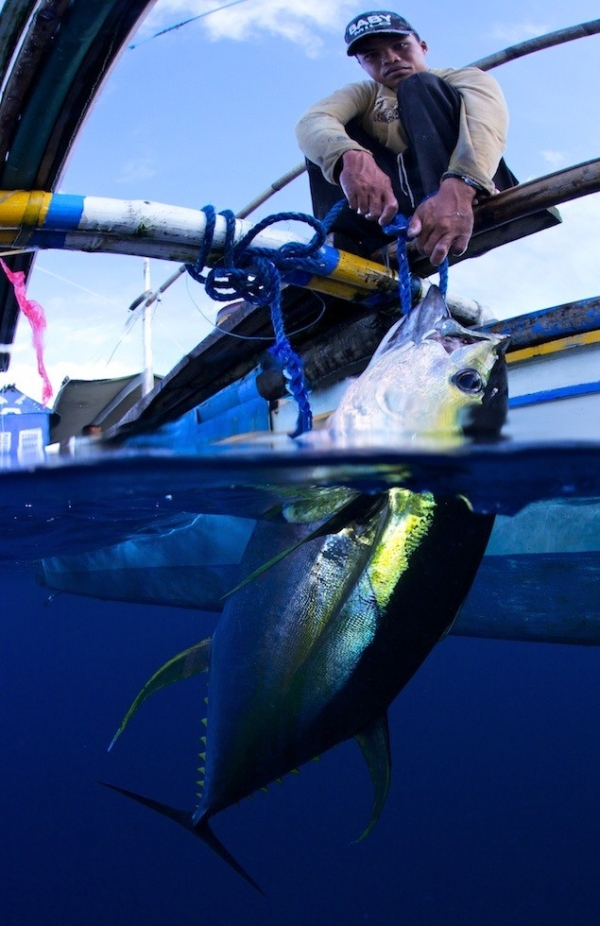 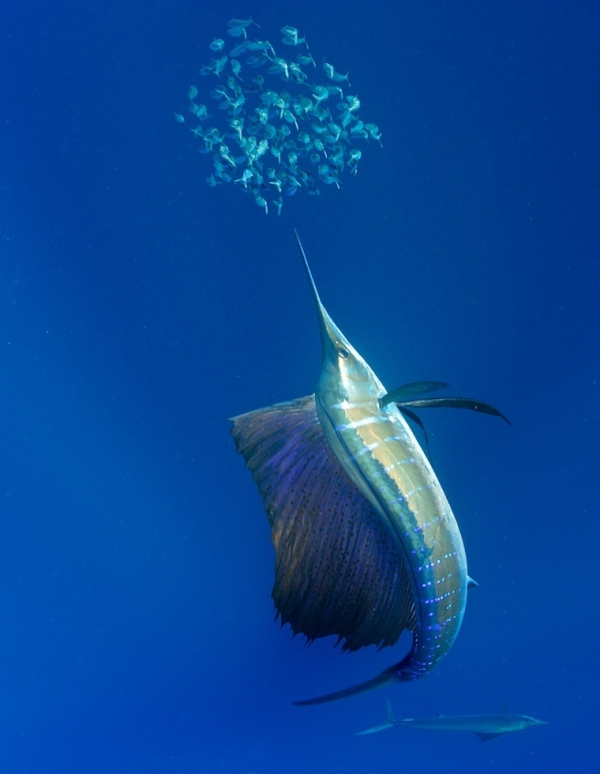 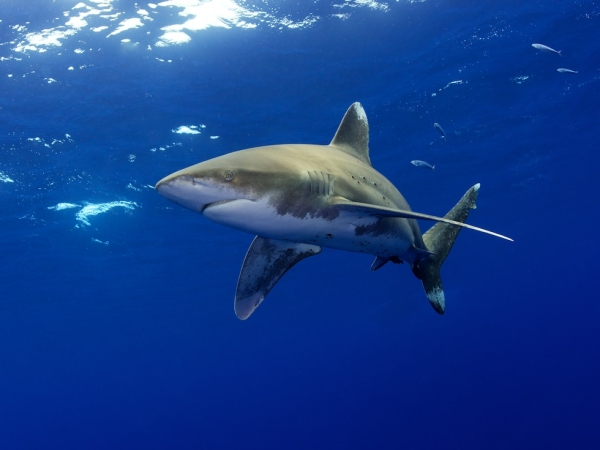 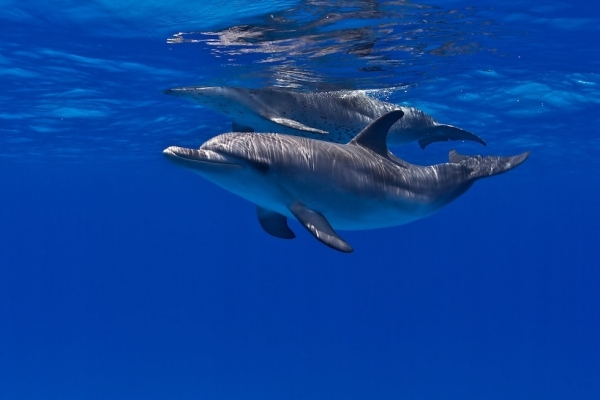 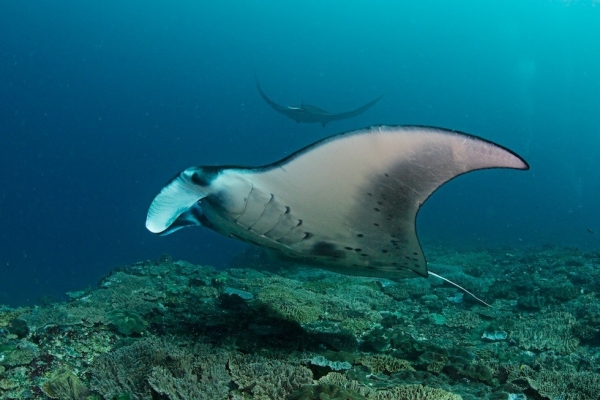 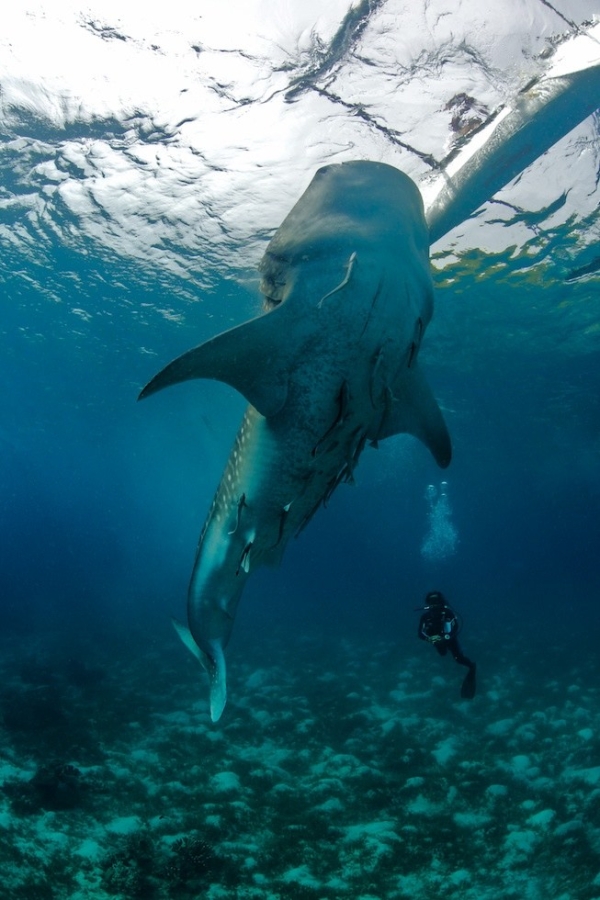 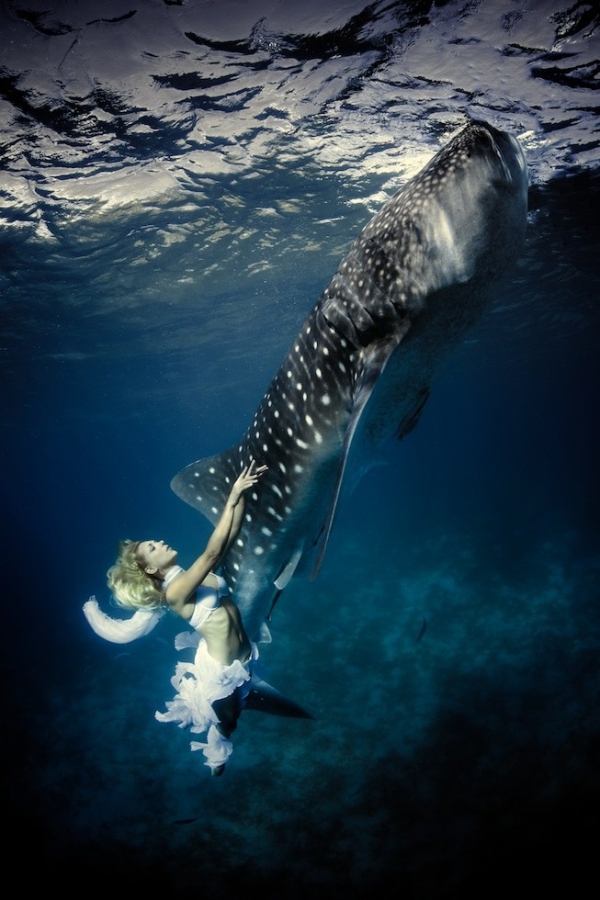 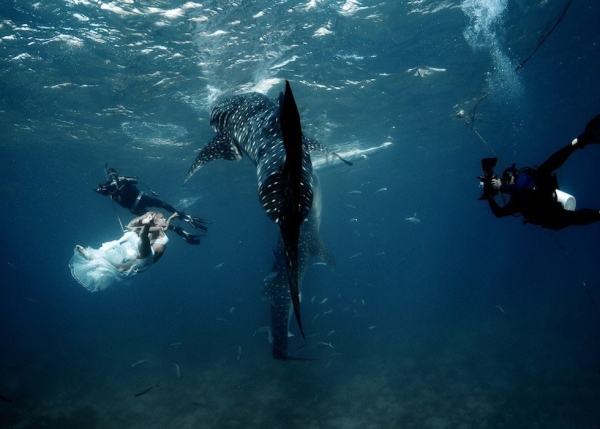 It's not everyday you see high-fashion models abandoning their strut on the runway to take a dive in the ocean and swim with sharks while wearing haute couture gowns. That's why, when we spotted a story on The Telegraph that featured exactly that, we had to find out what was happening behind the scenes.

Durban-born Shawn Heinrichs, the co-creator of this series, showed a passion for adventure and nature from a very young age. He traveled to remote villages in southern Africa with his father when he was a child, traversed South Africa's Drakensberg Mountains and the Wild Coast, and spent countless hours exploring on the beaches. The University of Pennsylvania graduate's passion for the oceans ultimately led him to become a cinematographer, scuba diver, and marine conservationist.

When we came across his fashion photos, we went on a little expedition of our own and discovered Heinrichs has done extensive work on marine conservation and won numerous awards for it. We reached out to the Boulder, Colorado-based cinematographer via email to find out more about his work.

You're described as a passionate cinematographer, scuba diver, marine conservationist and investigative conservation journalist. What came first? And how did it lead to your current work?

I began scuba diving in 1990 and immediately realized I had found my place in the world. My roots are in photography and in the '90s I took that passion underwater. My career evolved and I quickly moved into cinematography, creating films about the oceans and all things related to conserving them. In the late 2000s my work and aspirations drew me back to my photographic roots, and now I pursue both photography and cinematography in my projects.

Over a decade of experience and and a extensive network of contacts across the globe have enabled me to quickly develop, plan, and execute assignments. Through exhaustive trial-and-error, I believe I have achieved an exceptional track record, delivering groundbreaking stories and imagery in some of the most challenging circumstances. With my imagery, I seek to combine powerful stories with captivating images that put a face on the issues and expose the truth. Gripping, vivid, undeniable, heart-breaking and inspirational: these are the words I believe best describe my imagery and stories — stories that reach millions and mobilize them to action.

You've gone undercover to expose stories about the endangered species trade in some of the most remote or challenging locations worldwide. How do you find your stories? Do you try keep a low profile while filming or photographing? How? What has been your most challenging story?

Working on the frontlines of marine conservation can be a lonely, frustrating and often depressing experience. With a decade of environmental investigation experience, I have seen just about every imaginable act of cruelty and wanton destruction. Through these hard experiences I have learned to separate myself, developing an alter ego as it were, to cope in the heat of the moment and not subject myself to increased danger.

In the face of such destruction, I walk a fine line between bitter reality and hope. My job is to expose the destruction as a wake-up call to the world, but also to preserve hope in the future; that mankind will wake up, will change and things will get better. I call this approach "strong medicine in small doses." The problem is, in the process of collecting these "small doses" I have had to expose myself to massive and prolonged doses. And as no surprise, this extreme exposure can take its toll on the soul.

I spend countless hours researching the species and regions I focus on. I have an extensive network of collaborators around the world who assist me in my work and share information and updates on breaking stories. Sometime the stories come to me through my network and other times I build them from scratch by piecing together information from many sources. While in the field I try to maintain a very low profile. In order to capture real interactions and document events as they would unfold without my presence, I must blend into the scene. I employ a variety of covers and a regiment of techniques to get access to and document these stories. I really cannot disclose these as they could have real impact on my future work.

I have faced many challenges during my years of field work and it is hard to say what one story presented the greatest challenge. Some were more logistically challenging, other more emotionally, and still others presented serious threats to my life. For example, when documenting the shark fin trade in Ecuador, in the space of just 24 hours, I was accosted by a gang of violent teenagers, had a machete held to my throat twice by angry fishermen, and had gunshots fired under my hotel window. I made it out safely, but it was close!

Your work has taken you to the Bahamas, Mexico, Ecuador and different parts of Asia. What are the similarities and differences between the fishing industries in these countries? Where are different species of fish most endangered? Are there any examples of fishing's being done right?

Every place I travel to has its own unique culture, people, landscape and stories. For the most part, sadly, the fisheries story is very similar across most countries. Basically, governments have allowed industrial fishing fleets, often owned by huge conglomerates or wealthy businessmen, to strip-mine their vulnerable marine resources and leave ocean deserts in their wake. Local fishermen who depend on their coastal fisheries are left with nothing and frequently turn to destructive fisheries such as shark finning to feed their families. When the last of their marine resources is depleted, they abandon their way of life and move on to manual labor or face poverty unemployed.

One of the few exceptions I have come across is the Bahamas. In the mid-90s, the Bahamas banned longline and purse seine fisheries and heavily restricted shark fisheries. In 2011, they took a major step and declared all of the Bahamas a shark sanctuary. As a result, the Bahamas still has robust populations of large predatory shark species, dolphins, turtles and other charismatic marine life. Another great example is the innovative community-based marine protected areas created by Misool Eco Resort in Raja Ampat, Indonesia.

Regarding endangered marine species, the list is long and scary. Some of the most endangered species that I focus on are sharks and manta rays. These species have been systematically targeted and have been all but wiped out by the shark fin and gill trade. Through my stories, imagery and campaign work, I intend to turn the tide and help save these vulnerable species.

What inspired you to photograph models with sharks? Do you have any memorable moments from that particular shoot?

This November I teamed up with fashion/wildlife photographer Kristian Schmidt to redefine how the world views threatened marine species. I first met Kristian on a whale shark trip with our friend and ally Richard Branson and conservation organization WildAid (an NGO focused on reducing demand for endangered species), and we were immediately captivated by each other's work. Recognizing that people only protect what they care about, we hatched a plan that would combine my underwater and marine life photography expertise with Kristian's mastery of creative fashion photography.

We assembled a team composed of stunning models, a stylist and a dive specialist. Joining Kristian and I were team members including: Italian model Roberta Mancino (world skydiving champion and one of the world's foremost wing-suit base jumpers), model Hannah Fraser (professional underwater model and real-life mermaid), Fazli Krasniqi (professional stylist) and Taro Smith (physiologist and artist).

We spent four months planning the shoot, choosing the right models, supporting team members and fashion accessories. We had to make sure our timing aligned with the best chances for good weather and ocean conditions. And finally, we had to hope that nature would cooperate.

The entire shoot was full-on as we worked 20-hour days beginning at 4:00 am. The entire shoot was so inspirational and groundbreaking, it is honestly hard to pick out a single moment. I think when we first started seeing the images come together, we knew we were onto something and worked all the harder to improve each day.

Where will your next story take you?

Currently I am working on the next phase of our project that connects beautiful human subjects with charismatic marine life. I am also working on artistic underwater imagery, in more controlled environments, that focuses on creating surreal expressions that are hard to believe are real! In the cinematography realm, I am collaborating on a feature film project and continuing my work documenting exciting marine species and the threats they face.