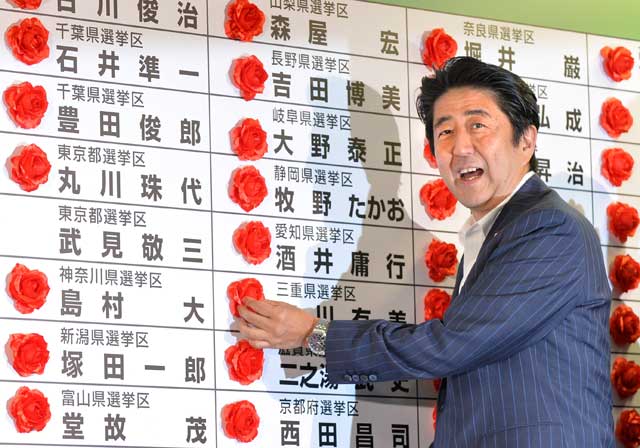 Japan's Prime Minister and President of the Liberal Democratic Party (LDP) Shinzo Abe smiles as he places a red paper rose on an LDP candidate's name to indicate an election victory at the party's headquarters in Tokyo on July 21, 2013. (Kazuhiro Nogi/AFP/Getty Images)

Prime Minister Shinzo Abe's ruling coalition scored a decisive victory in Sunday's parliamentary elections, ending the opposition's control of the Upper House and giving him a solid majority in both houses of the National Diet. The results, which had been widely anticipated, were a resounding vote of confidence for Abe's performance since he took the helm in a landslide national election seven months ago, which kicked the increasingly unpopular Democratic Party of Japan out of power.

With aggressive stimulus measures centering on a controversial monetary policy, Abe and his Liberal Democratic Party were able to engineer a surge in the stock market and generate optimism about the economy in general — something the DPJ failed to do in its three years in power. Abe may also have benefited from aggressive Chinese moves to challenge Tokyo's territorial rights to the Senkaku Islands, a group of rocky islets in the East China Sea that are also claimed by Beijing and Taipei. In the face of frequent Chinese shows of force, Abe's nationalistic views and hawkish foreign and defense policies seemed more acceptable, or even desirable, to an increasing number of Japanese voters.

Emerging from the impressive victory, Abe told reporters that his main focus would continue to be strengthening the economy. Observers agree, however, that armed with an overwhelming majority in the legislature and assured of a long-term prime ministership, it's only a matter of time before he will start taking legislative steps toward a rewriting of the peace-embracing Constitution, to upgrade the Self-Defense Forces into a full-fledged military and allow more military cooperation with the U.S. and other allies overseas.

It is far from clear whether Japanese voters would support this policy direction, but what's certain is that such moves would provoke negative reactions from neighboring countries, notably China and South Korea, and worsen Tokyo's already very testy relationships with them.

The constitutional changes sought by Abe are largely supported by Washington's foreign and defense policy establishment. But the U.S. also doesn't want situations in which it has to take sides between Tokyo and Beijing, or Tokyo and Seoul. As Abe's popularity grows in Japan, the Obama administration and its surrogates have been uncharacteristically silent and noncommittal in policy debates about East Asian geopolitics.