A Rock By Any Other Name: Asia's Premiere Language Game of 2012 | Asia Society Skip to main content 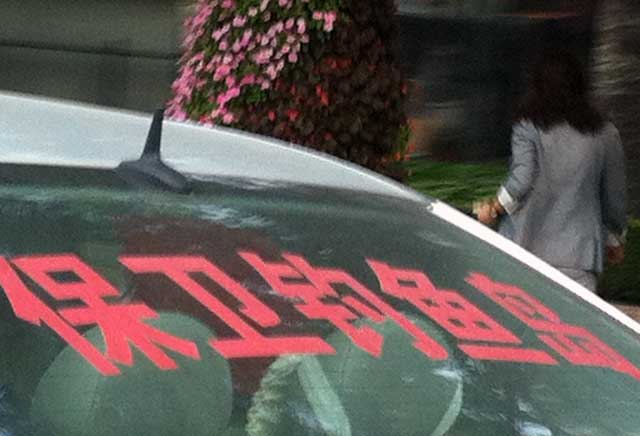 "'Tis but thy name that is my enemy." So declares, famously, Shakespeare's Juliet in her oft-quoted rant that reaches its peak with "…that which we call a rose, by any other name would smell as sweet." While Juliet attempts to call into question the significance of names, Romeo acknowledges the power that the act of naming has to bring about realities: "call me but love, and I'll be new baptized."

Confucius would clearly take a position closer to that of Romeo. Indeed, the Confucian answer to Juliet's question, "what's in a name?" would be, "quite a lot, really." Chapter 13 of the Analects 論語 introduces the concept of the "rectification of names," 正名 which is the first in a millennia-long salvo of justifications within the Confucian tradition for the importance of getting words right. The basic idea is that names help shape reality, and in the Confucian context this usually means the social world of human relationships.

The easiest place to see how this works is probably in the system of naming family members in Chinese. Unlike English, which uses generic terms like "uncle," "aunt," and "cousin," Chinese employs distinct terms for your father's younger brother and older brother/sister, mother's older and younger brother/sister, and the children (cousins) associated with their families. So when one says "brother" or "sister" in Chinese, for example, one is always specifying "older" or "younger" in the very word that one uses — so your older sister is your jiejie 姐姐 and your younger sister is your meimei 妹妹. In this way, the social hierarchy and the concept of social duty (i.e., the younger must respect and defer to the elder) is embedded in the language itself. In the Confucian vision of the world, calling your jiejie "meimei" distorts the web of proper social relationships and leads to moral chaos.

China, Japan, and Korea, all of which have been involved in disputes over territorial rights to islands in the Pacific that came to a head in 2012, share this Confucian heritage of proper naming. Americans, who overall probably reflect a view of the relationship of language and reality more akin to that of Juliet, are famous for pragmatism and lack of decorum. So it was no surprise in August 2012 when State Department spokeswoman Victoria Nuland looked exasperated when confronted repeatedly by a Chinese journalist who insisted she clarify the U.S. position with regard to the official name of the disputed islands known in Chinese as the Diaoyu 釣魚島 and in Japanese as the Senkaku 尖閣諸島. Nuland somewhat condescendingly told the reporter that she would need to consult her "special little rocks cheat sheet" and then stated that "we call them the Senkakus" (read "hey, it's just a name") but "we don't take a position on them." Her Chinese interlocutor was clearly frustrated by this, and took her to task for the obvious contradiction in her logic — she had obviously never heard of the "rectification of names" before.

I had my own "special little rocks" moment when I saw a billboard in northern New Jersey (on my way to the Korean supermarket) that showed a picture of a rocky crag and declared in English, "This is Dokdo — in Korea." Most New Jersey residents would probably drive by and think this is some rather unattractive Korean tourism poster. The real meaning is that what the Koreans call Dokdo 독도 is called Takeshima 竹島 in Japan, and like the Diaoyu/Senkaku, their sovereignty is contested — in this case, between Japan and South Korea. This year, the Korean government launched a PR campaign and brought foreign journalists to the island, and Japan asked for the dispute to be brought before the International Court of Justice. CNN's report on this story in October 2012 also refers to it as "a dispute over rocks" and emphasizes the fact that the local population is exactly two people, while all of the Koreans interviewed use the word "islands."

Both of these island (rocks?) disputes are clearly about more than names — they are about territorial waters, fishing rights, and potential oil and gas reserves. They also reflect the legacies of the Pacific War and Japan's colonial enterprise in the first half of the 20th century, and the historical consciousness of China and South Korea, two nations that suffered humiliations at the hands of foreign invaders over the last two centuries and more. But what the U.S. commentators on these disputes seem to have missed is the way that setting the names right taps into a much older tradition of organizing reality and creating social order through naming.

Perhaps the way forward is for a next generation of leaders in China, Korea, and Japan to change the names of these islands completely and rectify the names to reflect a newly harmonious East Asian community that transcends the difficult legacies of colonialism and war. To do that, they'll need to develop themselves as both "linguists and "diplomats."