2013: Sino-Japanese Relations on the Rocks 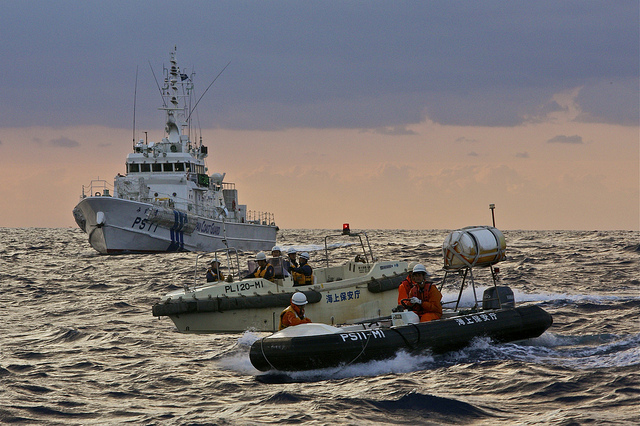 A Japanese flotilla from Japan's coast guard is vigilant in defending the waters off the Senkaku/Diaoyu islands. (Al Jazeera English/Flickr)

In 2012, a cluster of uninhabited islets — the Senkaku/Diaoyu chain — became the focal point for a dangerous drama between China and Japan, with Taiwan cast in a supporting role. The decades-old dispute intensified as nationalist passions flared, often with official encouragement, against a backdrop of strategic tension as China’s waxing ambitions stretch the seams of the East Asian maritime order. They must manage the dispute more responsibly in 2013 if they are to avoid conflict and realize the potential economic payoffs of cooperation in the East China Sea.

Domestic political circumstances certainly did not help in 2012. As elections approached in Japan, incumbent Prime Minister Yoshihiko Noda sagged under the weight of a weak economy and faced pressure on his right not to kowtow to a rising China. In Beijing, the newly anointed Xi Jinping likewise had strong incentive not to appear weak, taking the helm of a communist party that continues to rely on nationalism — and thus the specter of Japanese imperialism — to compensate for its deficit in democratic legitimacy. In both states, credible legal claims and historical mistrust made it easy to mobilize popular support for hardline positions that will be hard to unwind.

By year’s end, the outlook was grim. Japan’s new prime minister, the conservative Shinzo Abe, campaigned on a platform of keeping Japan strong and secure. He emerged from his landslide victory in December insisting that there was “no room for talks” on the sovereignty of the Senkakus. China sent maritime surveillance planes over the islets, and Japan countered with F-15 fighter aircraft to intercept them. The influential Chinese Academy of Social Sciences opined that conflict over the islands is inevitable.

That is indeed a real risk. Both Abe and Xi have ample strategic and domestic political incentives not to signal softness or appear to back down. Increasing maritime patrols presage further incidents at sea. The arousal of nationalist groups — whether seeking to plant flags on rocky shores or simply waving them in the streets — will make it difficult for leaders to turn the other cheek when incidents occur, leading to real possibilities of escalation.

Yet there are some reasons for optimism. Neither government appears to want a war, as armed conflict is unlikely to give either side what it wants. For China, Japan’s qualitative naval superiority and security treaty with the United States — which obligates U.S. support for Japan in event of attack — dim the prospects of a maritime victory. For Japan, a win would at best be pyrrhic. Defending a few small islets with uncertain adjoining maritime rights would be little reward for risking a rupture in economic ties and adding fuel to Chinese nationalism and military modernization.

In both China and Japan, nationalism is a potent political commodity, but economic performance is a safer and more durable basis for popular support. Abe’s Liberal Democratic Party (LDP) exploited the island disputes for electoral advantage, but the LDP’s victory owes primarily to voters’ concerns about their pocketbooks. If Abe wants to end Japan’s seven-year game of prime ministerial musical chairs, he must prioritize reviving a phlegmatic economy. Xi Jinping, too, is settling into office at a time when China’s economic slowdown is contributing to rising domestic unrest. Feuding with Japan is a good way to bring frustrated Chinese into the streets but does not fill their empty stomachs.

In 2012, rival claimants too often framed the Senkaku/Diaoyu issue as a zero-sum struggle for sovereignty of the islets. That frame taps into norms of territorial integrity and has served the short-term interests of some politicians, but it offers little hope for a solution. Even armed conflict is unlikely to resolve the question of who owns the islets and the surrounding seabed, where the real treasure of oil and gas deposits are believed to lie. Even an unlikely agreement on the sovereignty of the islets themselves would not resolve the crisscrossing lines of competing maritime claims around them. As long as the stalemate endures, no claimant will be able to access energy resources safely.

Abe, Xi, and Taiwanese President Ma Ying-Jeou would be better off framing the issue as part of a broader disagreement over prized resources throughout the East China Sea. An economic pie would be easier to divide than a territorial one, and the claimants need not agree on the sovereignty question to discuss energy exploration. Such talks would enable the claimants to back away from the brink of war without necessarily losing face. Meanwhile, deferring the sovereignty debate would provide some cooling time and a chance for the two states to patch some fences before returning to it later.

This is not to say that negotiating access to sea blocks would be simple. Claimants would still have ample political incentives to refuse to compromise. The sovereignty question would linger, and nationalist citizens, opportunistic politicians, or military mishaps could trigger incidents that bring the islets back to center stage. But a greater focus on economic opportunities would put the dispute — and the claimants’ broader triangular relationship — in a perspective more conducive to peace in 2013.