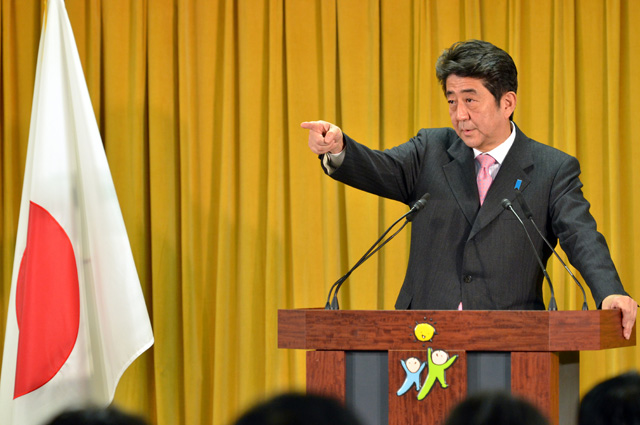 Incoming Japanese prime minister Shinzo Abe points to a journalist during a press conference at the LDP headquarters in Tokyo on December 17, 2012. (Yoshikazu Tsuno/AFP/Getty Images)

The Liberal Democratic Party (LDP) of Japan, led by nationalist former Prime Minister Shinzo Abe, swept back into power with a landslide victory on Sunday, immediately raising concerns there will be fresh bickering and more tension with China and other neighboring nations over territorial and historical issues. The result of the general election was a clear and unequivocal rejection by Japanese voters after three years of rule by the Democratic Party of Japan (DPJ), which replaced the LDP at the national helm in 2009 by promising political reform and greater harmony with Japan’s East Asian neighbors — but made little headway on either front.

The DPJ’s strength in the 480-seat Lower House of the Diet was slashed by three quarters, to just 56, while the LDP gained an absolute majority by expanding its representation from 118 to 294. Under the constitution, that will give LDP’s standing coalition with Komeitō, which together controls 325 seats, enough power to overrule actions of the Upper House, where it does not yet have a majority.

Abe, slated to be sworn in as prime minister before the end of the year, has promised to push for a constitutional revision to convert Japan’s Self-Defense Forces into a full-fledged military, and vowed to strengthen Tokyo’s control over the Senkaku Islands, at the center of a territorial dispute with China for several years, by building port facilities and permanently stationing government functionaries there. These and other promises LDP made during the campaign are certain to provoke more anti-Japanese ire in China and South Korea, which are also locked in a dispute over a separate set of rocky islets in the sea between the two countries.

Adding to concerns over Japan’s "nationalist tilt" is the return of ultra-nationalist former Tokyo governor Shintaro Ishihara to national politics, along with the success of his Ishin (Restoration) Party, which he recently cobbled together with help from the current, populist Osaka mayor Toru Hashimoto. The group increased its Diet strength form 11 seats to 54, making it the third largest force in the Lower House after LDP and DPJ. In addition to their confrontational rhetoric toward China and South Korea, the LDP and Ishin also differ from DPJ in that they both advocate reopening of some nuclear power plants, still idle in the wake of the horrific meltdown of the Fukushima Daiichi plant after last year’s earthquake and tsunami in northern Japan.

Liberal newspapers and commentators consoled themselves by saying that with voter turnout at 59 percent — a record-low for post-war Japan — the results were not an endorsement of LDP policy proposals, but a show of disappointment at the DPJ’s performance in the aftermath of the earthquake/tsunami and a national economic stagnation that worsened as a result.

They also say that the LDP, with its brave talk about creating a stronger Japan, was helped by the aggressive behavior of Beijing around the Senkaku Islands, by North Korea’s missile launch just a few days before the voting, and by provocations from South Korean and Russian leaders who earlier this year respectively visited islands under their control that are also claimed by Japan — the Takeshima islets (called Dok Do by the Koreans) in the Sea of Japan, and the Southern Kuriles just a short ferry ride from the coast of Japan’s northernmost main island, Hokkaido.

But with LDP’s victory so decisive, it’s hard to predict whether cooler heads will prevail.