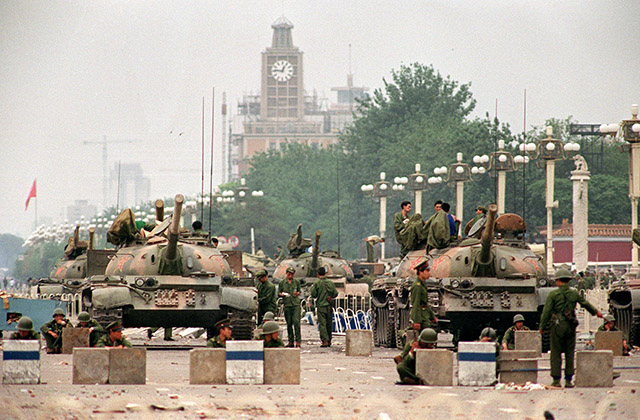 In a ChinaFile discussion, scholars debate Mao's legacy in China and whether Xi Jinping "represents a return to the politics of the Mao era." Learn more

On May 20, an open letter condemning China’s Communist Party and detailing the June 4, 1989 Beijing massacre began circulating online. Originally signed by eleven Chinese studying in the U.S. and Australia, it was addressed to “fellow college students within China” in order to “share the truth with you and to expose crimes that have been perpetrated up to this day.”

Gu Yi, a University of Georgia chemistry student from southwest China who has been studying in the U.S. since 2012, spent three hours crafting the letter with the help of a friend at Columbia University before posting it to a Google Doc and soliciting signatories. According to Gu, the number of signatures gradually surpassed 50 over the next four days until an editorial in the nationalistic Global Times Chinese newspaper accused the students of “twisting facts” and being “brainwashed in foreign countries.” Over 120 new signatures appeared on the letter overnight, with hundreds more added since. On May 26, government authorities reportedly sent directives to “urgently delete” the Chinese language Global Times commentary, and it was quickly scrubbed from news portals that had republished it.

In a phone interview with Asia Blog, Gu discussed his letter, activism among young Chinese, and the current atmosphere in his country.

Who are the people that have signed this letter?

Originally just overseas students, but after we opened the Google Doc, we got signatures from students, professors, doctors, engineers, businessmen, and also got signatures from Mainland China, including a high school student who signed his real name. He was pretty brave. What’s very interesting is that after the Global Times editorial, we got four signatures with vulgar names and acrimonious remarks. We don’t know why. We can’t say where they came from or whether it was online propaganda people, but it’s pretty interesting and it’s kind of an indication of the impact our letter had. We never anticipated that.

Have you received any threats?

I got two anonymous emails all written in Chinese with vulgar words threatening me and warning me about my safety.

Does that scare you?

I’m not that afraid, but probably the biggest concern is what will happen when I go back to China. That’s certainly a problem, but you can’t let that constant fear overcome you. You can’t let the fear make decisions for you; otherwise you will live in fear all your life.

Do you plan to go back to China anytime soon?

I’m actually a graduate student and am busy, so I don’t think I have the time to go back to China, even if I didn’t do this letter. I still have to work on my projects. But after graduation, that just depends. Everything is possible, but I still miss my family and want to be with them. I’ve been told that this letter can pose some problems, but it’s the same answer: you can’t let that kind of fear govern you. Now everyone is living under this constant fear and very few people choose to stand up to speak. But if none of us speak out, we as a nation, as a people, will live in fear in the future.

What does your family think of you publishing this open letter?

I haven’t told them yet, and I don’t think they’ll get in any instant trouble now since it’s just before June 4. I don’t think authorities want to visit my family to create some international news. I’m not sure what they’ll do after that, but beforehand [authorities] are pretty sensitive and just want to avoid trouble.

Some have suggested that most Chinese activists are from the older generation, and that this kind of action is relatively rare among post-80s and post-90s Chinese who grew up after 1989. Do you agree?

My action is to some extent conservative. We actually do have a lot of post-80s and post-90s activists in China and abroad. They’re probably not so famous. One example is a college student in Beijing who suggested last year that we could use some special method to deliver politically sensitive messages to Chinese mobile phones. Her suggestion was very creative, but it also led to her sudden disappearance, and finally, her confirmed arrest. She was a very brave girl.

There was another girl named Liu Di, a freelance writer born in 1981. When she was a student, she was very active online and wrote some articles and commentaries. She was also arrested and put in jail for about a year, but when she was released she didn’t change. She kept writing and she contributed to some freethinking in China.

We actually do have a lot of activists, but we have to admit that the relative proportion of these activists in the overall population is still small. Many people don’t have the information, or they are simply not interested. Many people know what this government is and what’s going on, but they choose to have their own personal lives without getting involved in politics and those complexities. This is just their personal choice.

I did know something, but not in too much detail. I just knew that some students and civilians were killed in Beijing, but I only got access to the details without difficulty after coming here. I watched a documentary called The Gate of Heavenly Peace online, I read a lot of accounts by witnesses and survivors, and I visited the June 4 museum in Hong Kong and saw some of the evidence, such as a helmet a student was wearing when he was shot to death.

What made you want to start looking into these resources?

Half came out of curiosity. I wanted to know what happened in the past in detail. And it partly came from responsibility. That’s something big that happened in my country and has been covered up, so I think it’s my responsibility to unravel this secret and tell everyone I know.

Do you think you’re at all unique among overseas Chinese students in wanting to know more about things that are censored in China, and then tell others?

I don’t think I’m unique. I got other signatures and also got lots of encouraging emails, including some other students both at home and [in the U.S.] who were fully supportive of the letter, but at the same time were too afraid to sign.

How would you respond to the accusation in Global Times that you’ve been “brainwashed” by “overseas hostile forces”?

There are two very interesting phenomena with this editorial. First, they refuse to debate us on the facts. In my open letter I listed some victims’ names and specific places where bloodshed happened, but they weren’t able to debate based on the facts. Instead they just threw out accusations. And second, they quickly removed the editorial after publication. Why were they so afraid to keep this editorial? Why were they so eager to remain silent themselves and to the public? This is a good indication of where the truth lies.

How did you feel about China’s government before coming to the U.S.?

Actually I’ve been a dissident for a long time, but I wasn’t active before coming here. A lot of people, including me and other people in China, just dislike the Communist Party. We know the Party is far away from what it claims to be, but we don’t necessarily stand up. Many people choose to stay inside the system and get the best advantage from it and the Party. For me, the Party lost all its legitimacy after it fired on its own people.

How has the way you look at China changed in the three years since moving to the U.S.?

I think with the mounting power of Xi Jinping the new communist regime is more repressive. Mr. Xi is a sort of strong man and he’s trying to restore the absolute power of the Party chief, which was largely lost by his predecessors. He’s doing this by means of two campaigns. The first is anti-corruption. He arrested a lot of corrupt officials, but only on his opponents' side, so this is a very effective tool to fight his opponents within the Party. Second, he’s trying to eradicate civil society in China. He’s been arresting scholars, activists, and lawyers. This is a clear indication that China is actually backing up. What’s more, his government is more hardline in terms of nationalism. He’s trying to intensify national hatred of Japan, territorial disputes, and the image of the United States and other Western countries. So I’m worried China is turning to fascism.