Interview: Bloomberg's Tom Lasseter on the 'Immense Value' of In-Depth Reporting on Asia 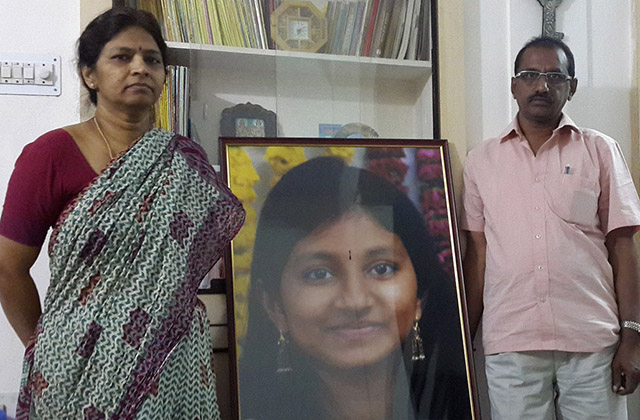 K. Shobha (left) and K. Krishna stand beside a portrait of their daughter, Kasarla Rishitha Reddy, who was among those killed in the Beas River flood. (Tom Lasseter/Bloomberg)

On June 3, Asia Society New York will host the awarding of the 2015 Osborn Elliott Prize for Excellence in Journalism on Asia to a team of three Bloomberg News reporters, with special guests George Stephanopoulos and Marcus Brauchi. Learn more

In 2014, journalist Tom Lasseter was part of a Bloomberg News team that reported on dire health effects in India sprouting from uranium and coal mining, as well as how illegal sand mining led to a flood that drowned two dozen college students.

On June 3, Lasseter and the Bloomberg News team will receive Asia Society's 2015 Osborn Elliott Prize for Excellence in Journalism on Asia for their stories, which the jury chair said, “helped bring attention to communities where the poorest of the poor and their children are being deformed and killed by diseases that are linked to local industrial pollution.” In an interview with Asia Blog, Lasseter looked back on his stints as a foreign correspondent in Iraq, Russia, China, and India, and discussed the value he sees in investigative journalism on Asia.

Can you compare what it’s like doing investigative reporting in India and China?

The reporting environment is totally different. In China you spend a lot of time thinking about the best way of approaching people and telling their stories while trying to ensure that they won’t suffer for you having done so. In India it’s certainly a much more open reporting environment. I’ve not had the experience there of being in a village and having the local officials show up, ask for my press card, and take me away to drink tea, or the sort of polite but insistent questioning by local police who then call the Foreign Affairs Ministry. I’ve not had that happen [in India], but in China, if it’s a story with implications that local administrations in particular would consider sensitive, it’s a regular feature.

I think the challenge of reporting in India has more to do with just trying to figure out what’s going on. For instance, in these stories with the uranium mining and the Beas River drownings, it was just tracking down court documents and environmental testing reports. With the Jadugora uranium mining story, it was tracking down doctors and paperwork and trying to piece together what was going on. There’s often not readily available databases or organized information, particularly in those areas. It’s just about going out to different health clinics that might not have electricity or centralized record keeping and trying to piece together from all those things the narrative of what’s happening.

You’ve reported from a lot of seemingly dangerous places. Have you ever felt in physical danger?

Most of what I did from 2003 to 2006 was report from Iraq and it was certainly a very dangerous time for everyone there, including reporters. There were at least several instances where things could have gone the other way. When I moved to Russia, I reported in Afghanistan and Pakistan a fair amount and there was never any sort of direct confrontation with force. It was more — particularly in Afghanistan — figuring out whether an area was safe enough to spend the night in a guesthouse or a small hotel. Particularly in places like Gardez, people I stayed with clearly became more nervous as my reporting time there went on. They worried about the Taliban presence in the area and whether they would find out I was staying in that house. But it was a different threat level at that time for me compared to what I was doing in Iraq. And then in China, I never felt a physical risk; it was just whether I was bringing risk to those I was reporting on. Back here in India, I’ve certainly not felt any physical danger.

In all the places you’ve reported from, what’s been the story you’ve been proudest of?

For many of these stories when they’ve involved hardship and tragedy for those involved, I sort of struggle with the idea of being proud of them. The stories that have stayed with me the most have been those that gave me the opportunity to get out of capital cities and hit the road and try to piece together what is happening in a country. Whatever the subject, it’s the chance to take the time to report past the prevailing narratives and start digging: insurgency and sectarian militias in Iraq, the implications of U.S. detention operations in Afghanistan and GTMO, questions about how the Chinese Communist Party approaches the rule of law and the divide in wealth and privilege, and, more recently, the effect of extractive industries on ordinary citizens in India. They’re all different subjects in very different places, but getting answers, or trying to, works in the same way — keep going back to interview as many people and read as many documents as you can.

Doing in-depth shoe leather reporting like this obviously entails significant time and resources in a period when most newsrooms are being forced to cut back. Do you think there’s still sufficient demand in the West for this type of reporting on Asia?

Absolutely. I think Asia in particular, where you have these large and growing economies, there’s intense curiosity and a desire for facts and a sense of what’s happening. I think that’s particularly true for India and China; China because of the way information works there. Looking in from the outside, it’s hard to figure out what’s going on, so to have someone do a well-reported piece that gives you a better angle or sense of that is incredibly valuable, whether you’re an academic, just someone with an interest in China, or certainly someone who has money in China.

Then there’s been a renewed interest in India since Modi came to office, and when I talk with people about India, sometimes the questions are sort of open: What’s happening? What does Modi mean? Are economic reforms serious? What are the implications? I think to be able to spend time on stories and subjects that help answer that in part, people absolutely are interested. There’s so much investment. I think people just wonder where it’s going. What do these countries mean? Certainly no one story is going to answer that but I think that stories that help to answer some part of that are of immense value.