A History of China's 'Humiliation' and 'Hurt Feelings' at the Olympics 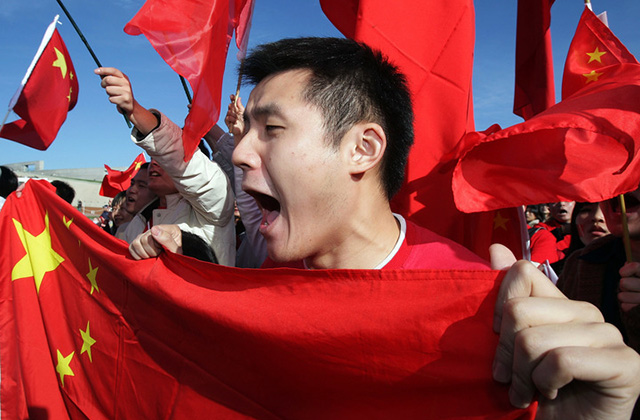 A Chinese supporter shouts at anti-Chinese protestors during the Olympic Torch relay at Parliament House on April 24, 2008 in Canberra, Australia. (Mark Nolan/Getty Images)

It only took one day into the 2016 Olympic games for the first China-related controversy to unfold.

Last Saturday, Australian swimmer Mack Horton called his Chinese opponent Sun Yang a “drug cheat” in reference to a 2014 doping suspension, shortly before narrowly beating him for the 400-meter freestyle gold medal. After the race, a tearful Sun accused Horton of playing mind games: "On the Olympics' competition stage, every athlete deserves to be respected and there's no need to use these cheap tricks to affect each other."

The reaction from China was similarly swift. Commenters posted a flood of angry remarks on Horton’s social media accounts, and Chinese media condemned the athlete. China’s swim team manager invoked a frequently used phrase for responding to foreign criticism, saying that Horton “hurt the feelings” of the Chinese swimmers.

Such reactions to fairly standard trash talk may strike some as thin-skinned. But to many Chinese people, slights like Horton’s can evoke strong connections to a historic “humiliation” narrative pushed in schools, museums, and media — one in which Westerners look down upon China, insult it, and conspire to keep it down.

The Olympics provide a particularly ripe venue for these incidents.

At the 2012 London games, an American commentator called a 16-year-old Chinese swimmer’s world-record performance “suspicious” and “disturbing” for how fast it was. Soon thereafter, an article in China’s official Xinhua News Agency quoted a sports official claiming that the Americans “cannot accept China’s rise. That’s why they criticize Chinese athletes.”

At the same games, several upsets and disqualifications that cost Chinese athletes gold medals were attributed to Western conspiracies — supposedly borne out of a “hysterical” and “paranoid” fear of China, according to the Communist Party mouthpiece People’s Daily. (These claims were never substantiated).

Perhaps the most significant outpouring of indignation came in the run-up to the 2008 Beijing games, when the worldwide Olympic torch relay was disrupted by protesters in London, Paris, and San Francisco and led to boycotts of French companies in China. At one protest outside the French retailer Carrefour in the city of Qingdao, protesters directly linked historic and modern issues when they toted signs saying, “Say No to Carrefour! Say No to French Imperialists! Strongly Protest Britain and France Invading China in 1860! Strongly Protest [Britain and France] Slandering Our Olympics in 2008!”

The below video, made by a Chinese college student, went viral and captured the mood at the time. “Imperialism will never abandon its intention to destroy us!” it says to chilling music, adding that China’s torch relay struggle is “just like the long march for [China’s] rise from a semi-colony up to a modern independent country.”

To understand this enduring sentiment, one has to understand the “Century of Humiliation” narrative that has become a cornerstone of China’s national identity. The narrative goes like this: China was once a great world power and glorious peace-loving civilization, until foreign aggressors in Europe, the United States, and Japan — starting with the British and the First Opium War in 1839 — brought the country to its knees through a century of brutal conquest and forced territorial concessions.

Though a similar “national humiliation” grievance existed under China’s Kuomintang government in the 1920s and 1930s, it was abandoned by Mao Zedong following his assumption of power in 1949 in favor of a storyline that stressed socialist triumphalism and proletarian internationalism. But the Tiananmen Square protests of 1989 and the domino collapse of communist states over the next few years illustrated that that approach had run out of steam, so the Communist Party shifted its focus back to a nationalistic victimhood narrative wherein it played the role of savior. According to this narrative, it wasn’t until the Japanese army was defeated in 1945 and the Communist Party prevailed in China’s civil war in 1949 that the country was set on a path toward national “rejuvenation.”

Olympic glory has been framed — implicitly and explicitly — as one important indicator of this rejuvenation. As early as 1903, a sort of national insecurity was already developing when Chinese scholar Chen Tianhua translated an article written by a British man referring to China as “the sick man of East Asia.” The article, intended as a political critique of the Qing government’s stagnation, was interpreted by Chen in part as an attack on the physical weakness of Chinese people. “Shame! Shame! Shame!,” Chen wrote in response. “This great China, which for many centuries was hailed as the Celestial Empire by neighbors, is now reduced to a fourth rate nation! The foreigners call us the sick man of East Asia, call us a barbaric, inferior race.”

China only sent athletes to the Olympics four times up to 1952 — winning no medals — and then went on a three decade hiatus during the international isolation of the Mao era. But after winning its first gold at the 1984 Los Angeles games, the stage was set for the Olympics to symbolize something much more to China than athletic competition.

At the turn of this century, this sentiment was formalized when a cabinet-approved government document called on different ministries and provincial governments to cooperate for the purpose of “winning honor” at the 2004 and 2008 Olympics. In 2004, the website of the Beijing Organizing Committee for the Olympic Games published an article titled “From ‘Sick man of East Asia’ to ‘Sports Big Power,’” which invoked a cartoon published in a foreign newspaper that supposedly mocked China’s early Olympic failures. “This is a humiliation and satire of the Chinese athletes but also indicates that the disaster-ridden old China has no status in the world,” it read.

In his book Never Forget National Humiliation, Professor Wang Zheng of Seton Hall University explains how Beijing's extravagant hosting of the 2008 Olympics and its record medal haul (China bested the United States for the first time ever) played into this narrative:

“It is because of the lingering memory of national humiliation that the Chinese government and the Chinese Communist Party (CCP) elite can legitimize their rule through sports. Gold medals in international sports have been effectively used as the currency of CCP legitimacy. Comparing today’s achievements with that of old China, as in the article “From ‘Sick Man of East Asia’ to ‘Sports Big Power,’” has been a common method of the CCP propaganda machine. It is a great achievement for China to go from just one participant and no medals in 1932 to 100 medals and 51 golds in 2008. The success of the CCP government and China’s rejuvenation in power and wealth can be illustrated by the world-leading count of 51 gold medals.”

However, many international observers criticized China’s human rights record rather than stand in awe of the country’s progress and achievements, playing directly into the historical narrative of arrogant Westerners conspiring to keep China from its rightful place as a respected world power. Many Chinese took it as a slap in the face. In a 2008 interview, Paul A. Cohen, a professor of history emeritus at Wellesley College, described this as part of an “uneasy relationship in China today between pride and insecurity, so conspicuously embodied in the importance many Chinese attached to the Olympics.”

In many Chinese eyes, a national “rejuvenation” necessitated the validation and approval of the very powers that had originally knocked the country off its perch. Cohen described this as a “quest — almost a yearning — for the admiration and respect of the rest of the world, above all the Western world.” He added: “If the approval isn’t granted or is granted only with qualifications, initial pride can suddenly morph into resentment, anger, and deepened insecurity.”

While comments like Mack Horton’s would likely draw anger from any nation whose athlete was subjected to such insult, this historical “insecurity” might explain why grievances so frequently involve slights toward Chinese competitors. These incidents once again play right into the idea that Westerners look down upon China and will do whatever they can to undermine its achievements. In a 2008 interview with Asia Society’s Orville Schell, Chinese filmmaker Chen Shi-Zheng, whose work has explored psychological dynamics between China and the West, put it this way:

“We [Chinese] feel sensitive to any kind of slight and often have a very sharp reaction to perceived unfair treatment or injustices. On an emotional level we cannot help but associate treatment in the present with past injuries, defeats, invasions, and occupations by foreigners. There is something almost in our DNA that triggers autonomic, and sometimes extreme, responses to foreign criticism or put-downs.”