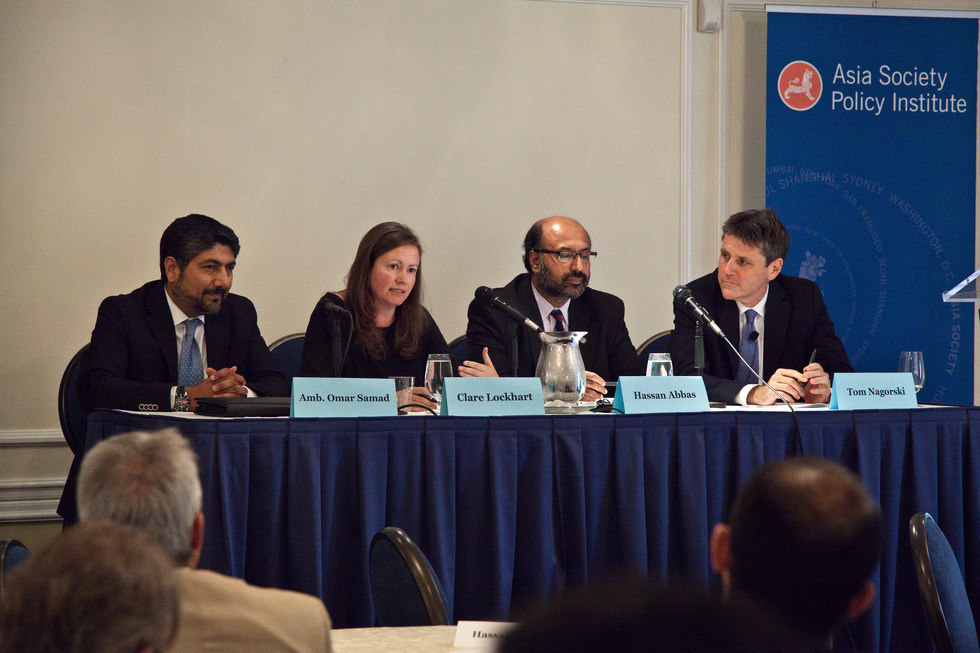 WASHINGTON, July 9, 2014 — In a spirited discussion at Asia Society’s Washington center, three veteran analysts of Afghanistan and Southwest Asia debated the controversy over the results of Afghanistan’s presidential election: its causes, its possible effects on Afghan society, and the solutions available to the leading candidates and their supporters.

“The most potent challenge and danger that Afghanistan faces is this political dilemma that we are in,” said Omar Samad, Senior Central Asia Fellow at the New America Foundation and former Afghan Ambassador to Canada and France.

While the other panelists agreed with that assessment, differences of opinion emerged about how Afghanistan ended up in its current political dispute and what presidential candidates Abdullah Abdullah and Ashraf Ghani might to do settle matters. Their discussion followed a keynote address by Amb. James Dobbins, U.S. Special Representative for Afghanistan and Pakistan.

“As we look at the current situation, it’s important to look at balancing three guiding principles: legitimacy, stability, and reform,” said governance expert Clare Lockhart, Director and Founder of the Institute for State Effectiveness.

Lockhart said the legitimacy of the next Afghan government will depend on “the preservation of the constitutional order” and “the credibility of the [electoral] process,” which she described as “paramount.”

Video: How Afghanistan Can Restore Its Political Credibility and Legitimacy (3 min., 18 sec.)

“There was a lot of investment in the Afghan military and police, but I only wish that there was more investment in the Afghan police, because it is always policing and civilian law enforcement infrastructure which build rule-of-law systems and courts,” said Abbas, who led the Asia Society commission that produced the July 2012 report Stabilizing Pakistan Through Police Reform.

Samad said the current challenge to Afghanistan’s political system has arisen because of the “patronage network” established by President Hamid Karzai.

“This patronage network does not represent Afghanistan, its people, its aspirations and everything they have gone through in the last three or four decades. It is a political mafia that has taken over Afghanistan. The reason why we are facing this political dilemma is because the people have had enough of it,” said Samad.

Lockhart said that Afghanistan will need to restore political legitimacy through both a “technical process” of ensuring that elections are conducted fairly and a “political process” by which the Abdullah and Ghani campaigns might come to an agreement about how to govern Afghanistan.

“Based on my own experience, it’s important to look at what political dialogue means, what style of negotiation [is used]. I don’t think it can be political dialogue at gunpoint. It needs to be a conflict resolution approach,” Lockhart said.

Abbas downplayed the effects that a resurgent Afghan Taliban might have had on the country’s political situation, contending that Afghanistan’s burgeoning middle class is capable of resisting the Taliban, at least in Kabul.

“There is a new class of young people and bureaucrats and politicians and people who are educated, who understand that they need to hold on to Kabul. That new middle class in Kabul, who have got new hope — they are not going to let Kabul fall. Even if the resurgence of the Taliban becomes a serious reality, the Taliban will only be able to cause problems in the south and east,” said Abbas, whose book The Taliban Revival was published recently.