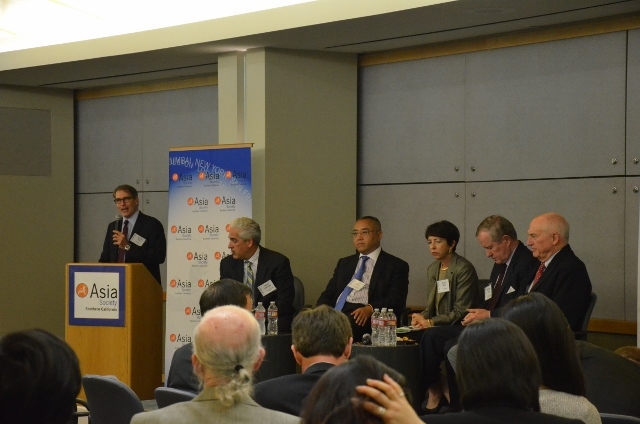 China’s slowing economy growth is a necessary and welcome – not worrying – development, leading scholars and businessmen said at a Los Angeles event organized by Asia Society Southern California and the Federal Reserve Bank of San Francisco.

The country’s gross domestic product expanded by 7.4% in 2014, a scorching pace by global standards but China’s slowest growth in 24 years. Speakers at Forecast Asia: China’s Ambition Grows as the Global Economy Slows, the launch of a new Asia Society series, agreed that China needed to cool down after years of over-investment in the property market.

“This is a good correction,” said Nicholas Lardy of the Peterson Institute for International Economic, citing the sharp deceleration of property investment. He cautioned that focusing on China’s (narrowly) missed growth target or its worst performance since 1990 misreads the economy.

“It had the slowest growth in 25 years, but created more jobs last year than in any of those 25 years,” Lardy said. “This slowdown is cyclical, not structural.”

Speakers expressed mixed opinions on the progress of President Xi Jinping’s ambitious reform agenda announced at the Third Plenum. Saying, “China has matured,” Wadsworth outlined strides toward easing capital controls and opening the financial market, including a fresh proposal to overhaul securities regulations and make it easier to invest in Chinese stocks.

“If you’re prepared to trust the markets, privatize the SOEs,” Wadsworth said. “Will the government have the guts to sell down below 51%?”
Shirk raised questions about whether Xi could pull off fiscal reforms, such as managing the heavy corporate and local government debt incurred by years of property speculation. She recalled that Deng Xiaoping made decentralization a key part of his early economic reforms as a way to gain buy-in from provincial leaders. But Xi’s reforms centralize economic power.

“I don’t believe there is a political strategy for economic reform. Where are the constituencies for this reform?” she said. You can’t just ‘strongman’ these reforms down people’s throats. That’s what I’m worried about.”

Shirk also expressed skepticism about Xi’s anti-corruption campaign, which she characterized as both a political purge and an effort to restore the Chinese Communist Party’s credibility. Yet the campaign’s own credibility is in doubt because it’s being led by the party.

“I don’t see any signs yet that the anti-corruption campaign is being carried out by the legal system. It won’t succeed unless Xi goes after people close to him,” she said.

Wadsworth believes that senior China financial officials are serious about creating a “culture of integrity,” and in a comment that sparked a swift exchange of one-liners, he added: “Anti-corruption campaigns are universal.”

“Corruption is universal,” Shirk shot back.

“Yes. There are more crooks on Wall Street than anywhere else.” Wadsworth concluded, to laughter from an audience of 100 people, among them many bankers and financiers.

Dong said the anti-corruption campaign reflected a key difference between Xi’s reforms and earlier efforts. Deng and Zhu Rongji’s agendas focused on privatization of agriculture and traditional industries, respectively. Xi, however, is bent on the “modernization of national governance…and he’s using the tool of anti-corruption,” Dong said.

Lardy remarked that the anti-corruption campaign is helping push the government to reform state-owned enterprises in energy and financial services, to the benefit of the economy. State companies play a far less important role in China than they used to, accounting now for about 25% of economic output. Lardy details that decline in his latest book, Markets Over Mao: The Rise of Private Business in China, and told the audience that the private sector is the main growth driver.

While wary of Xi’s concentration of power for domestic economic and ideological goals, Shirk said it will lead to a more restrained foreign policy, thus easing tensions with Japan, the Philippines, Vietnam and the U.S. over disputed islands.

“He’s adopted an (international) economic strategy with a multilateral approach. I’d rather compete on that basis rather than militarily,” Shirk said.

She and other speakers said the U.S. shouldn’t oppose China’s planned Asian Infrastructure Investment Bank, which would compete against the World Bank.

“The scariest attitude is the notion that competition between the U.S. and China is a zero-sum game,” Wadsworth said, making a general point, not linked to the infrastructure bank. “In business, we appreciate that partnership is the solution for the world, in all fields.”

Speakers said that Xi’s proposed reforms should enable growth that’s fast enough to produce jobs and maintain social stability, a key factor for the health of both the economy and the Communist Party.

Lardy said the past two years have disproven the longstanding notion that China had to grow at 8% a year to prevent unrest. And while innovation has become the buzzword for economic promise, it’s less relevant at this stage in China’s development, he said. The key is “will China have the policies to increase productivity?”

In addition to Los Angeles, Lardy participated in the other two Forecast Asia launch events, at Asia Society Centers in Houston and San Francisco.

Highlighting the economist’s renown, Los Angeles moderator Loevinger said that he had worked for eight Treasury Secretaries. And when it came to China, each one asked him, fittingly: “What does Lardy think about this?”