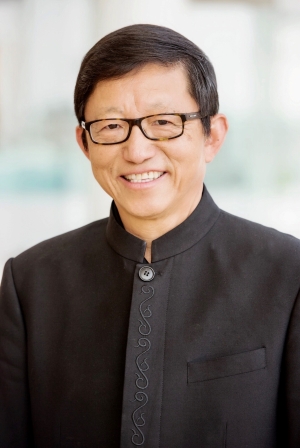 From humble origins in Shanghai, China, Charlie Zhang embarked on the road of destiny, drawn by the American dream. With only a few dollars in his pocket, but a strong determination to succeed, Zhang arrived in California in 1980 and began supporting himself as a restaurant dishwasher and as gas station attendant. In a few years, he saved enough money to fund his own modest restaurant. Zhang learned the restaurant business quickly, and by dint of hard work, coupled with keen business acumen, he founded Pick Up Stix, a popular Chinese fast food chain, which eventually expanded to more than 100 restaurants and was later sold to TGI Friday in 2001.

Zhang went on to establish Zion Enterprises, a real estate development firm, focused on revitalizing communities and increasing investor value. In fact, Zion Enterprises has created, planned and managed well over $200 million of commercial, retail, and residential projects in the Western United States. His next entrepreneurial success came in 2004 with Aseptic Solutions USA, a state of the art, technologically advanced bottling process to extend the shelf life of premium organic beverages. After expanding the customer base and greatly increasing revenues, Zhang sold Aseptic Solutions, in 2012, to Glanbia, a global nutrition company.

Zhang has received numerous accolades. Among them, Entrepreneur of the Year by Ernst & Young and the prestigious Ellis Island Medal of Honor, bestowed on those who have made a significant contribution to the United States. In addition, he is recipient of the "Distinguished Business for Science and Technology Award" and "Beijing International Entrepreneur of the Year". He also serves on the advisory board for several corporations and universities.

Increasingly, Zhang engages in philanthropic endeavors and supports organizations such as the Pacific Symphony, Ellis Island Medals of Honor, and Israel Archeology. In addition, he supports numerous schools and churches, locally and abroad. Recently, he established Orange County Music & Dance, a world-class nonprofit performing arts school located in Irvine, California, devoted to providing music and dance for the children of Orange County.

Charlie and his wife, Ling, reside in Laguna Niguel, California. Their two adult sons, Joshua and Benjamin, live in San Diego and San Francisco, respectively. The family is committed to living a life of joy, faith, peace and love.