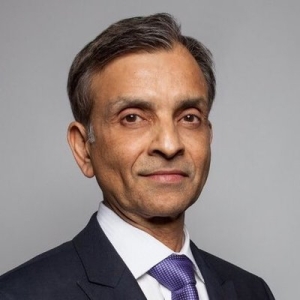 Vivek Ranadivé is the Owner & Chairman of the Sacramento Kings. He is an entrepreneur, technology visionary, best-selling author and philanthropist recognized for his innovative thinking.

As a technology entrepreneur, he pioneered the use of real-time event processing software and created TIBCO, a multibillion-dollar software company. In addition to digitizing Wall Street, his software became the central nervous system for most of the world’s largest companies and government agencies. He is known as “Mr. Real Time,” which reflects his belief that by getting the right information to the right place at the right time, you can make the world a better place.

Ranadivé is a longtime basketball fan whose affiliation with the NBA began in 2010, when he became the co-owner and vice chairman of the Golden State Warriors. In 2013, he became the first Indian majority owner of an NBA team when he purchased the Sacramento Kings, securing the team’s future in California’s capital city. Under Ranadivé’s leadership, the Kings have invested $1 billion in the downtown area, creating thousands of jobs, revitalizing the region and building the next great American city.

Ranadivé is the founder and managing general partner of venture capital firm Bow Capital, a partnership with the University of California with a mission to fund technology companies that advance society and make the world a better place.

As a young boy in his native Bombay, Ranadivé listened to the moon landing on the radio and was inspired at the age of 16 to leave India for Cambridge, Massachusetts. After earning both Bachelor’s and Master’s Degrees in Electrical Engineering from MIT, he earned an MBA at Harvard where he was a Baker Scholar.

Peter Guber in a fireside chat with Vivek Ranadivé