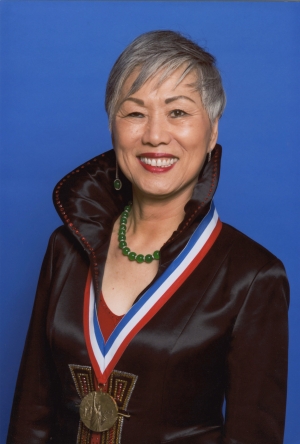 Born and raised in Taiwan, Anne immigrated to the United States in 1979 with her husband. She joined the Bowers Museum's Board of Governors in 1996 and has had an enormous impact on the Museum’s success. With her demur personality and small frame, Anne makes large miracles for the museum. She sets the highest example of leadership and commitment for others to follow, and it is all done as a volunteer with great love for the museum and its future.

Anne's exceptional leadership was recognized by her colleagues who unanimously elected her to Chairwoman of the Bowers’ Board of Governors in 2010; she is the first Chinese-American woman elected Chair of any accredited museum in California, and perhaps the United States. Anne also works with the Development Committee overseeing all the fund development activities of the museum. She is by far the museum's number one fundraiser, personally raising millions of dollars in donations over the years.

Anne has done more to enhance Chinese-American museum friendships than anyone on either side of the Pacific Ocean. Through her efforts, the Bowers has organized and traveled over 10 major Chinese exhibitions and several smaller ones to the United States. As part of these exhibitions, Anne has hosted over 350 leading scholars from China to the United States, and developed deep friendships with all of them. She has brought several important exhibitions to the Bowers including the legendary Terra Cotta Warriors from Xi’an (twice!), and most recently the work of internationally renowned couture fashion designer, Guo Pei. In doing so, she negotiated the complex contracts and almost single-handedly raised the necessary funds to make these great exhibits a reality. In thanks for her phenomenal efforts and diplomacy, Anne was made an Official World Ambassador for Shaanxi Province, China.

Using her contacts at the Shanghai Museum, Anne initiated a Junior Ambassador program at the Bowers to provide volunteer opportunities for high school students interested in culture and art. These students commit to a training program at the Bowers in public speaking, touring techniques, and learning the details of the exhibitions. After completing the year-long program, in the summer, the students travel to China and volunteer as docents at the Shanghai Museum.

Born with an inherently adventurous personality, Anne has traveled the world. She has been to Africa over a dozen times, mostly on safari, camping in tents. She participated in the zero gravity program with Russian cosmonauts at Star City outside of Moscow and made over a dozen trips to Tibet to be the first to organize an exhibit of Tibetan treasures to ever come to the USA.

In 2017, Anne was awarded the Ellis Island Medal of Honor which is presented annually to a select group of individuals whose accomplishments in their field and inspired service to our nation are cause for celebration. The Medal has been officially recognized by both Houses of Congress as one of our nation’s most prestigious awards and is annually memorialized in the Congressional Record. Anne has made it her mission to share her wealth of  knowledge, indomitable courage, boundless compassion, unique talents and selfless generosity with those less fortunate.

Later that same year, Anne was presented another prestigious award by the Association of Fundraising Professionals for her philanthropic efforts on behalf of the Bowers Museum and other charitable organizations.

Anne Shih has established a well-deserved reputation in Orange County as an ambassador of cross-cultural understanding and appreciation for the arts. Her grace, elegance and passion always shine through, even during challenging circumstances such as her successful battle with cancer. Anne is truly an inspiration, setting the highest example for others to follow, and she is an outstanding representative of Orange County's diverse population. Anne is instrumental in Bowers Museum’s mission of enriching lives through the world’s finest arts and cultures.

Peter Keller in a fireside chat with Anne Shih