Highlights from the 5th Annual PCSI Forum in Los Angeles 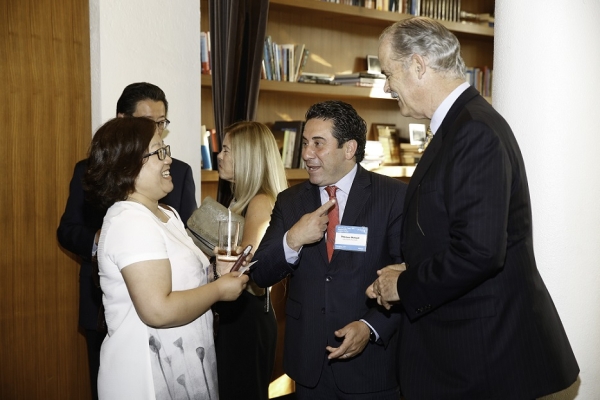 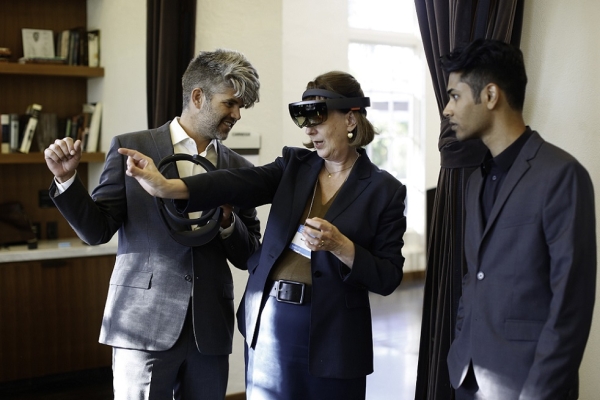 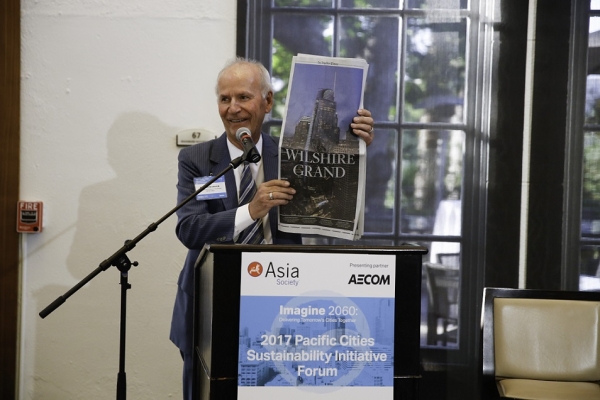 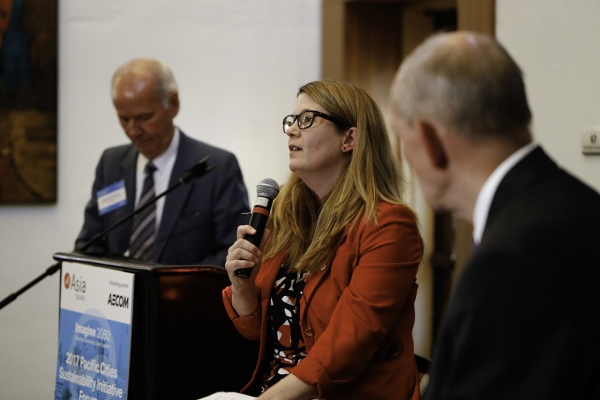 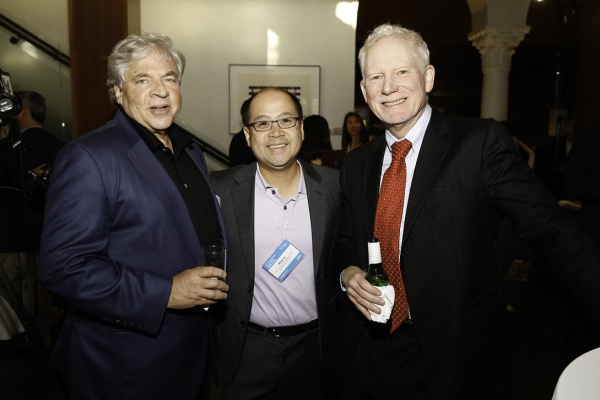 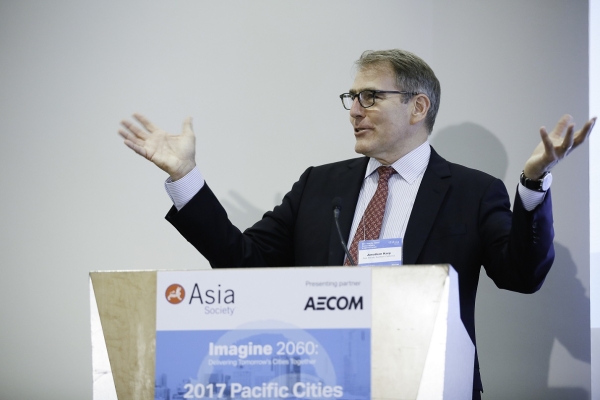 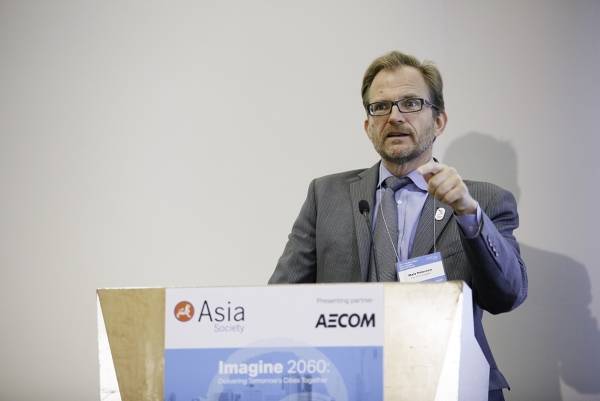 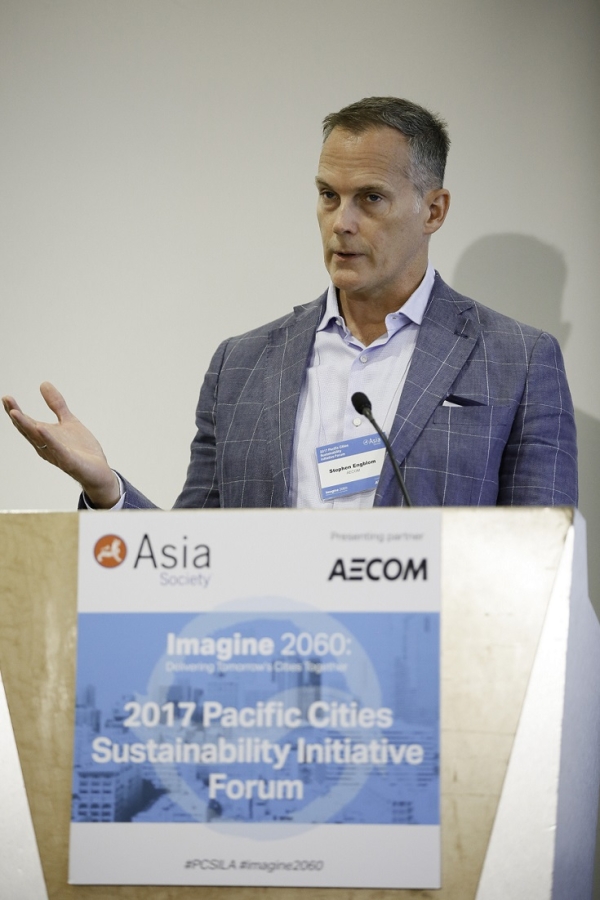 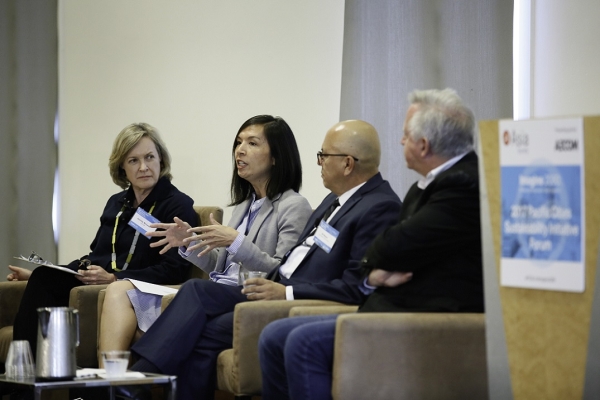 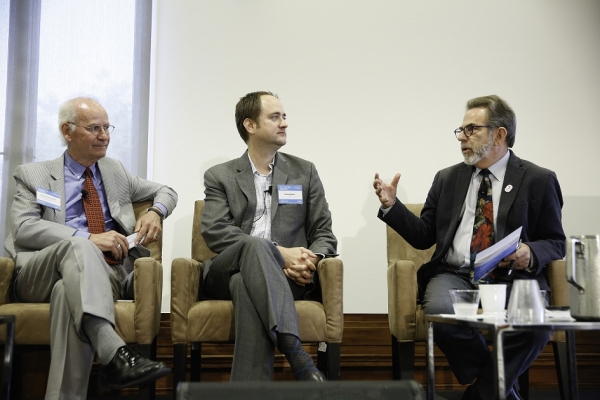 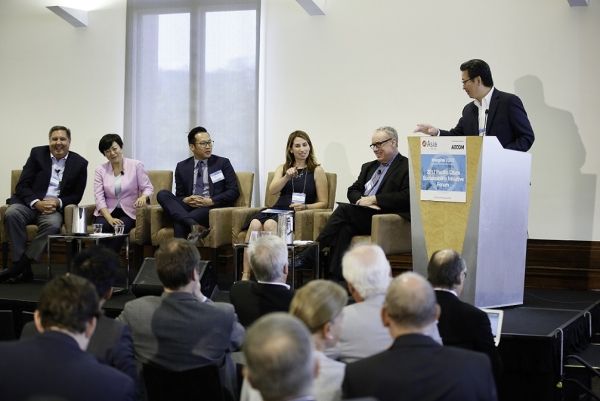 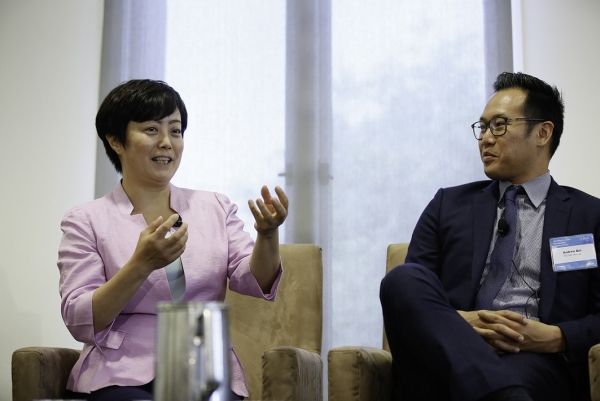 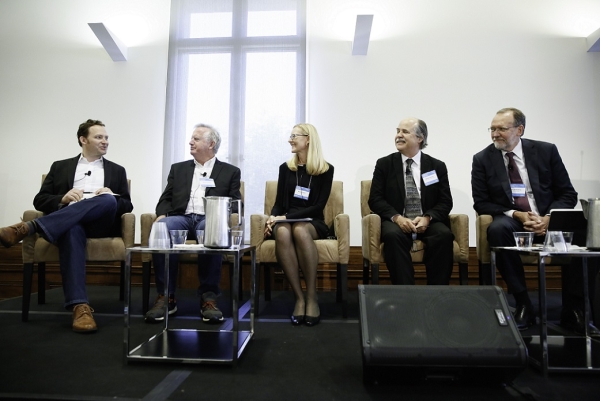 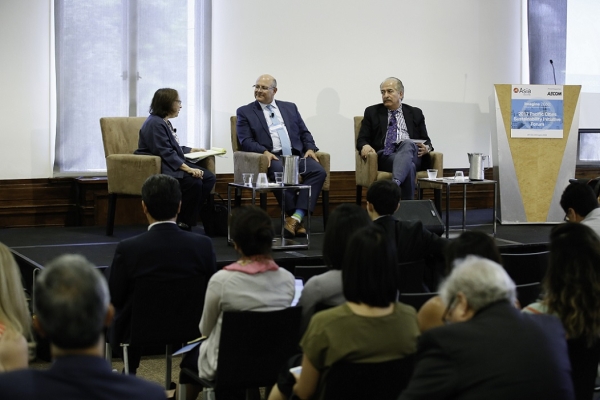 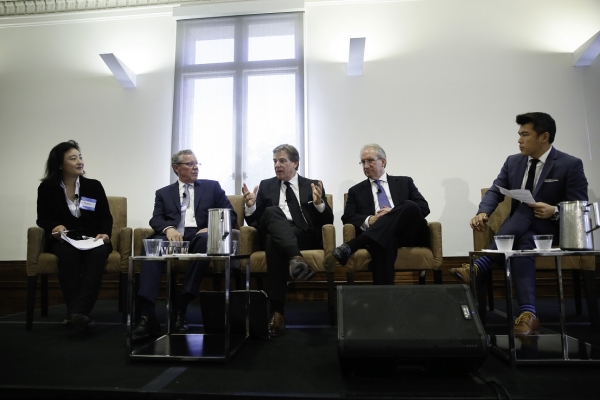 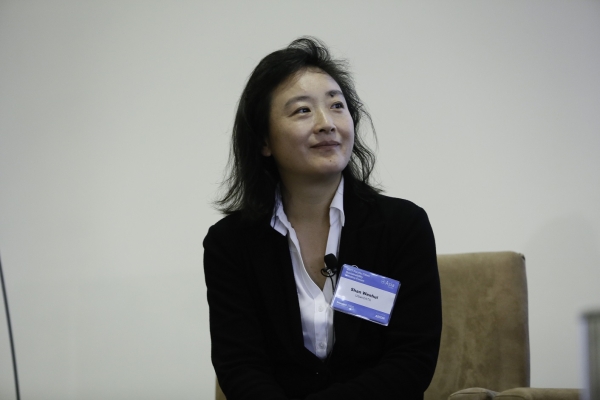 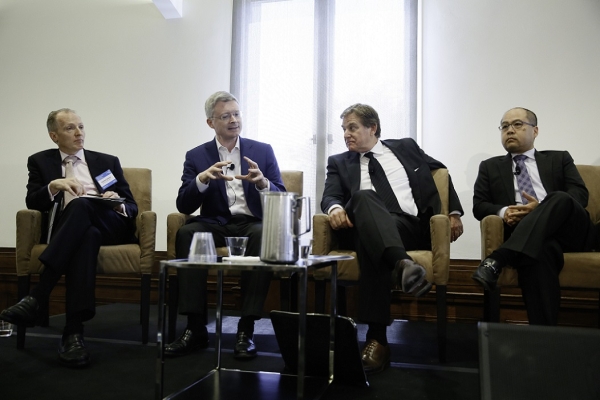 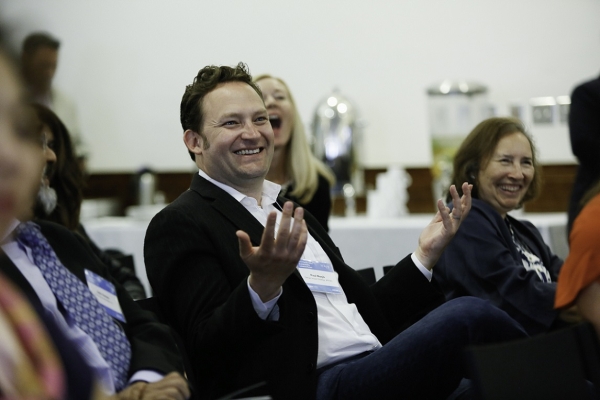 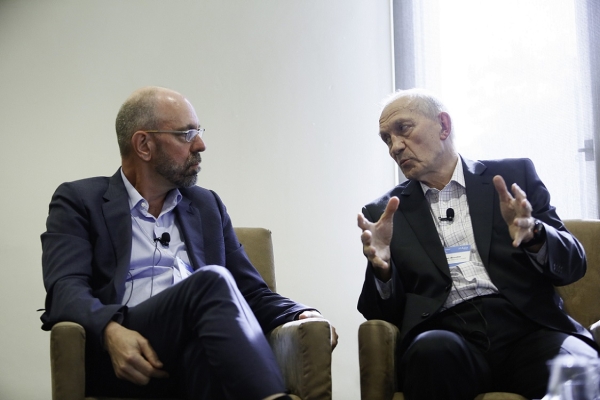 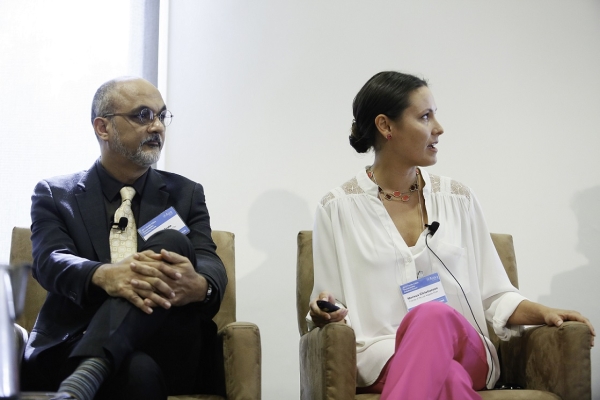 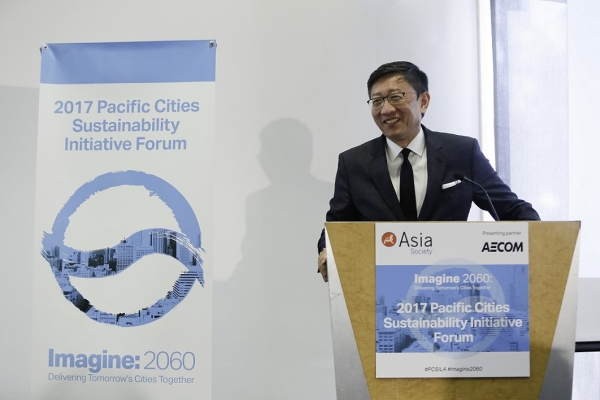 Rapid population growth, widening economic inequality, a global tidal wave of capital that is raising housing prices, and let’s not forget climate change. How are future cities to combat these challenges and improve the quality of life for residents? That was the central question at the 5th Annual Pacific Cities Sustainability Initiative Forum, Imagine 2060: Delivering Tomorrow’s Cities Together, in Los Angeles on June 28 and 29. Organized by Asia Society in partnership with AECOM, the Forum brought together over 100 experts from a wide range of fields in the private sector, government, academia and the nonprofit world around the Pacific Rim to discuss, among other topics, the role of waterfronts in developing sustainably prosperous cities.

“Most great cities started with a waterfront,” Sean Chiao, President for Asia Pacific at AECOM, told guests at the event’s opening reception. Today’s urban challenges require a “new level of imagination, He added, “This is the time for our generation to think boldly to reach integrated solutions.” Imagine 2060 is a three-year global series organized by Asia Society and AECOM to create a high-level dialogue, inspire long-term urban visions.

“I’m trying to get people to think horizontally when they live in a vertical world,” Nicholas Brooke, who led the reinvention of Hong Kong’s waterfront, said. Some 50 million people visit Hong Kong’s waterfront annually, and 3,000 took part in a cross-harbor swim last year. “In 1967, the harbor was a garbage dump. It’s amazing that people swim in it now,” said Mr. Brooke, Chairman of the Hong Kong Harbourfront Commission.

Los Angeles, well known for its Pacific coastline, is reshaping its relationship with other waterfronts that are critical to its vitality: the ports of Los Angeles and Long Beach, and the Los Angeles River, which has long been an afterthought in local planning. Like much of the city, the River is undergoing a renaissance, with the creation of parks, bike baths and housing that face the River rather than backing onto it. Of the River’s 51 miles, about 30 are within Los Angeles city limits, and hundreds of thousands of Angelenos live nearby. “The waterfront has to be accessible to all people,” said Carol Armstrong, who as Mayor Eric Garcetti’s Executive Officer for City Services, leads City Hall’s efforts to improve the River area for wildlife and people.

Los Angeles is demonstrating how cities are leadership actors on combatting climate change. Eric Garcetti and fellow mayors are pledging to exceed national environmental standards and adopt global goals regardless of Washington’s policy, said Matt Petersen, Los Angeles’s first Chief Sustainability Officer who has worked on international accords on behalf of the city. “City to city diplomacy is going to the way to get things done in the future,” he added.

The Forum focused, in large part, on ways in which the second-largest U.S. city can draw upon lessons and innovative ideas from other Pacific cities. Solutions to Los Angeles’ historical water challenges could have broad relevance, given that similar Mediterranean climates are home to one in every five people on Earth. The opening panel on the future of waterfront cities set the stage for looking at innovative and holistic solutions to build truly connected, functional resilient and sustainable cities. As UCLA Urban Planning Professor Kian Goh and former Los Angeles City Council Member Ed Reyes stressed, innovative ideas and technology are useless without effective local leadership and community buy-in.

Thing are aligning for Los Angeles, which in the past decade has undergone a transformation in accessibility, air quality and mobility for residents while undergoing an infusion of infrastructure investment to secure its position as the Gateway to the Pacific. Conservation policies and technology have made it the most water efficient city in the U.S., said Chief Sustainability Officer Peterson. Amid a “chronic emergency” with water, Los Angeles has developed an efficient multi-agency response, noted Andy Lipkis, founder of TreePeople. He said the city has adopted ideas from Australia, a model for water conservation.

The Forum’s panel discussions explored topics including integrated solutions for healthy urban water and air; the future of mobility, housing and working waterfronts, the creation of unique waterfront cultures and next-generation finance. Speakers drew from other waterfront cities such as Hong Kong, Shanghai, Panama City, San Francisco, Portland and Vancouver. Often regarded as a waterfront success story, “Vancouver is the dream gone wrong,” said Patrick Condon of the University of British Columbia. Global capital chasing investment opportunities has built gleaming waterfront buildings that many locals can’t afford. It threatens to “revive cities to the exclusion of their own people,” Condon said. Other panelists proposed government land-use policies to redirect investment or “location-efficient mortgages” to help make housing affordable.

California already faces a housing affordability crisis, and Los Angeles will also have to solve the mobility dilemma to remain competitive. The city is expanding public transport, but ride sharing will be critical given that there are already 10% more cars than licensed drivers in the U.S., said AECOM Senior Manager of Strategy Andrew Bui. Cities are facing a mobility paradox, said John Kwant, Vice President, City Solutions at Ford Smart Mobility, and need innovative solutions. Toward that end, the storied automaker has sponsored the country’s second-largest bike share program, in the San Francisco Bay area.

The Forum included visits to waterfront sites undergoing sustainable development. At the Port of Los Angeles, the participants learned that the port is aggressively deploying zero and near-zero emission trucks and cargo-handling equipment while expanding programs to reduce ship emissions. Along the Los Angeles River, Forum participants witnessed a neighborhood changing from forgotten to desired, thanks to the creation of a lively waterfront community with new housing, parks, bike paths cafes and other recreation spots. “The River is why this city is where it is,” said Marissa Christiansen, Executive Director of the nonprofit Friends of the LA River. “We’re at the beginning of creating a river culture.”