Asia Society at the Movies: Who Killed Vincent Chin?

A Screening and Conversation 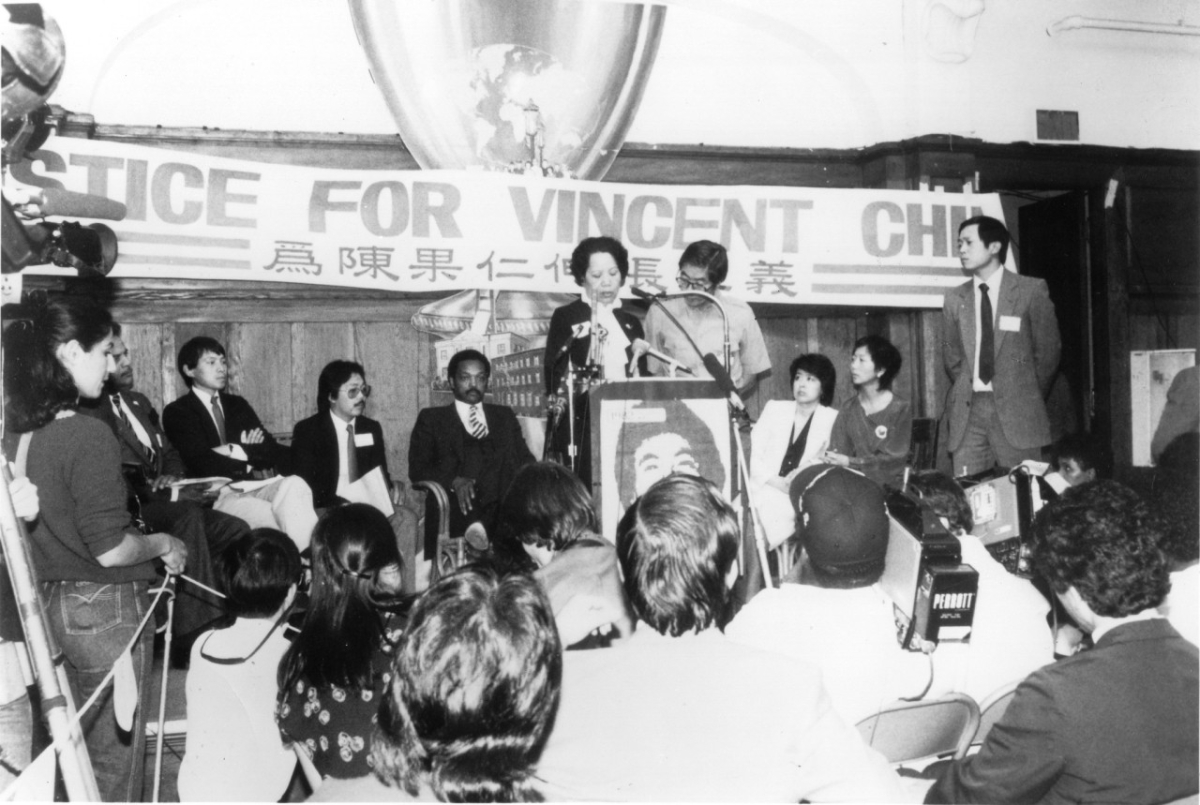 A still from the 1987 documentary "Who Killed Vincent Chin?"

Who Killed Vincent Chin? is an Academy Award–nominated film that serves as a powerful statement about racism in working-class America. The 1987 documentary recounts the stark facts surrounding the brutal murder of Vincent Chin, a 27-year-old Chinese American man. Chin was celebrating his last days of bachelorhood in a Detroit bar when an argument broke out between him and two white autoworkers: Ronald Ebens, a Chrysler Motors foreman, and his stepson, Michael Nitz. After Ebens shouted ethnic insults at Chin, the fight moved outside, and before onlookers, Ebens bludgeoned Chin to death with a baseball bat. In the ensuing trials, both Ebens and Nitz were let off with a suspended sentence and a small fine. Outrage over the murder and the lenient sentence for Chin’s killers ignited an unprecedented civil rights protest across the Asian American community, led by Lily Chin, the bereaved mother of Vincent. Brought up to be self-effacing, she successfully inspired a nationwide movement that led to a retrial. This tragic story addresses pressing social issues including the failure of the American judicial system to value every citizen's rights equally, the collapse of the automobile industry under pressure from Japanese imports, and the souring of the American dream for the blue-collar worker. Widely acclaimed by the press, Who Killed Vincent Chin? is an unforgettable film that remains crucial in understanding the evolution of Asian American activism.

Join us for a screening of Who Killed Vincent Chin? along with a conversation on the lasting legacy of Chin’s death. Michelle Yun Mapplethorpe, vice president for global artistic programs and director of Asia Society Museum, leads a discussion with artists Kenneth Tam and Siyan Wong to look at the current rise in violence against the Asian American and Pacific Islander community and how the arts may play a meaningful role in effecting real change against xenophobia and racial violence.

Kenneth Tam is a Brooklyn-based artist who works in video, sculpture, and photography. His latest solo exhibition Silent Spikes, is on view at the Queens Museum, New York, through June 23, 2021. The show explores intersections of gender performance, race, and labor economics connected to the building of the U.S. transcontinental railroad. The video will be presented at the Institute of Contemporary Art, Los Angeles in June. He will present a newly commissioned work as part of Open Call at The Shed, New York, on view summer 2021. He has participated in numerous group shows and residencies and has held solo exhibitions at the Kitchen at Queenslab, New York; The Gallery at Heimbold, Sarah Lawrence College, Bronxville; Minneapolis Institute of Art, Minneapolis; MIT List Center for Visual Arts, Boston; Commonwealth and Council, Los Angeles; and Night Gallery, Los Angeles. He is the recipient of a Foundation for Contemporary Arts Emergency Grant, California Community Foundation Fellowship, and Art Matters Foundation Grant. Tam is currently a lecturer in visual arts at Princeton University. He is involved with Stop Discriminasian, a coalition of workers within arts and culture who are confronting the racism, xenophobia, and violence towards diasporic Asians that have been amplified by the COVID-19 pandemic.

Siyan Wong is a New York-based visual artist whose work focuses on the working poor, the homeless, women, and the elderly. She is a first-generation immigrant who was born in China but raised in New York City. Siyan acquired her art fundamentals at LaGuardia High School of Music and Art and Performing Arts. Though she went on to study history and economics in college, and then attended law school, she always took art classes alongside her academic studies. In 2000, she began working as a workers' rights lawyer. Since 2018, Siyan has shown her paintings at the New York Artists Equity Association, New York Arts Center; and has spoken about her art at the Museum of Chinese in America (MOCA), New York, and other venues. As a workers' rights lawyer, her contact with everyday working people informs her empathy and artistic vision. But her immigrant roots and her encounters as an Asian American woman in the United States illuminate her visual interests. Her work was supported by the Asian Women Giving Circle and Lower Manhattan Cultural Council.

Michelle Yun Mapplethorpe is vice president for global artistic programs at Asia Society and director of Asia Society Museum in New York, appointed in October 2020. She is responsible for the Museum’s exhibitions program and its permanent collection, including the Mr. and Mrs. John D. Rockefeller 3rd Collection of traditional Asian art and a collection of contemporary artwork by leading and emerging Asian and Asian American artists. She also serves as artistic director of the Asia Society Triennial. Since joining Asia Society in 2012 as curator of modern and contemporary art, Yun Mapplethorpe has served as curator or co-curator for more than twenty-five exhibitions for the museum. She is a widely published author and frequent lecturer on modern and contemporary Asian art. Prior to joining Asia Society, she was curator of the Hunter College Art Galleries. She has served as project director of Cai Guo-Qiang’s studio and as curatorial assistant in the Department of Painting and Sculpture at the Museum of Modern Art, New York, in addition to organizing numerous independently curated exhibitions. Yun Mapplethorpe earned her MA in modern art and critical studies from Columbia University and her BA from Mount Holyoke College. She is a graduate of the Getty Leadership Institute’s Executive Education Program for Museum Leaders and sits on the advisory board of the Mount Holyoke College Art Museum.

This program is co-presented with Asian CineVision.