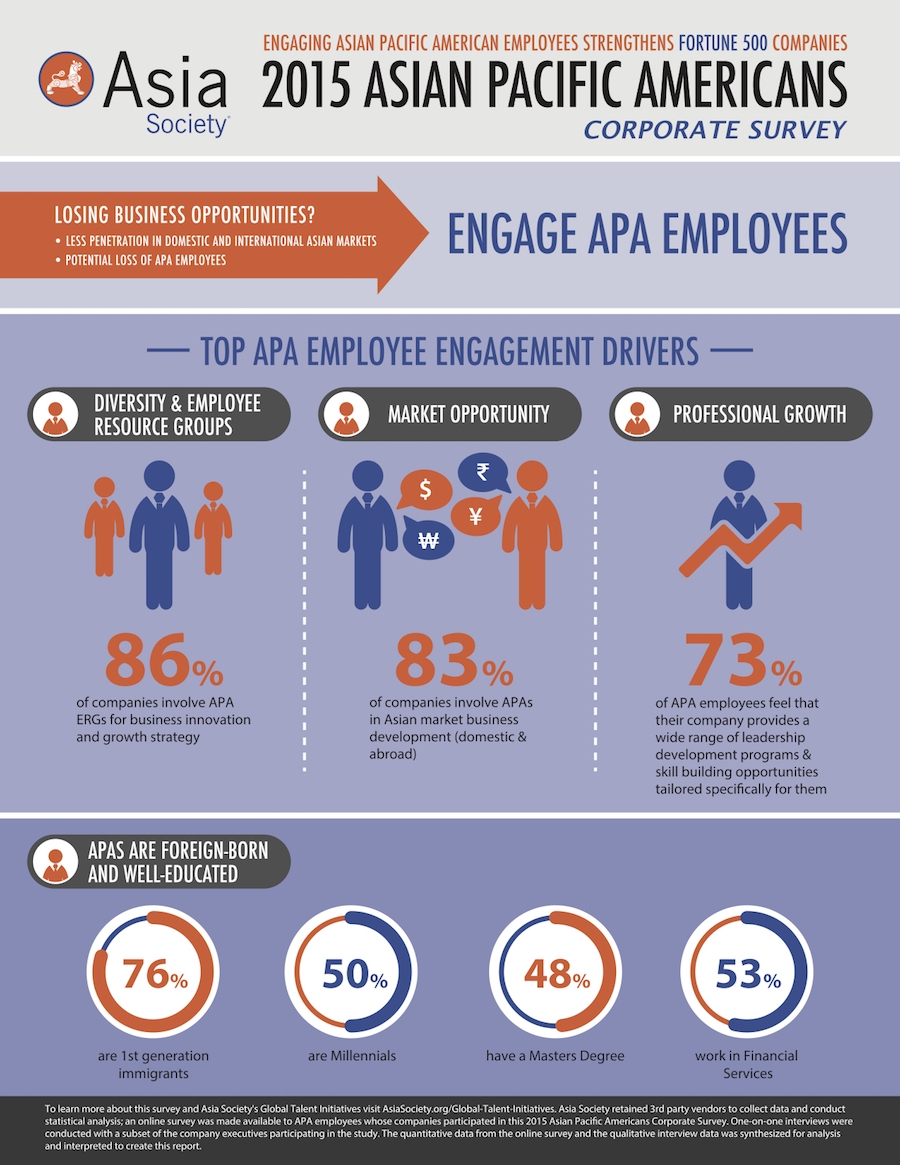 “The world’s leading companies know the vital role the Asia Pacific consumer and workforce leaders will play in their future,” said Josette Sheeran, President and CEO of Asia Society. “Yet, there is a critical gap in knowledge about the growth, development and advancement of this group.”

The survey findings indicate that compared to 2014, APAs see employers more favorably across every category. The greatest year-over-year improvement was in “APA Market Opportunity,” which tracks APA employee involvement in market strategy. 84% of APA employees responded favorably, a jump of 23% from 2014. Despite the improvement, findings across the survey reveal that APAs are still not fully brought into strategic conversations.

While 99% of surveyed APA employees report they really care about the success of their companies, not all feel fully engaged. 86% of employees at top performing companies felt that their company encouraged the participation of APA employees in market/business development activities. At other companies, only 65% of employees on average felt encouraged. The 21% gap between top performers and others represents lost business opportunities and lower employee retention rates.

Lack of engagement of APA leaders also manifests itself in company board makeup. 34% of employees at top performing companies report inadequate APA representation on the company’s board of directors versus 57% at other companies.

The area with largest room for improvement was “Professional Growth.” 24% of all APA employees declared themselves not favorable about their company in that category. In fact, professional growth is identified as one of the top engagement drivers among respondents. When asked what drives them to give their fullest at work, APA employees responded that their three biggest drivers are 1) work-life balance, 2) professional growth, and 3) diversity and employee resource groups (ERGs).

One of the survey’s most surprising findings was the universal support for ERGs among APA employees, with 99% of respondents favorable towards these groups. Initially formed as supportive affinity groups for individuals sharing common interests, ERGs have since evolved into channels for company leadership to personally interact with, and identify, high potential APAs whom they might never have met otherwise. The findings indicate that employers should explore the use these groups as a way to further engage APA talent.

The survey is developed in close consultation with Asia Society’s Global Talent and Diversity Council, which is comprised of 30 diversity leaders from Fortune 500 companies. It includes direct responses from Diversity & Inclusion/HR departments as well as perceptions and opinions from thousands of APA employees.