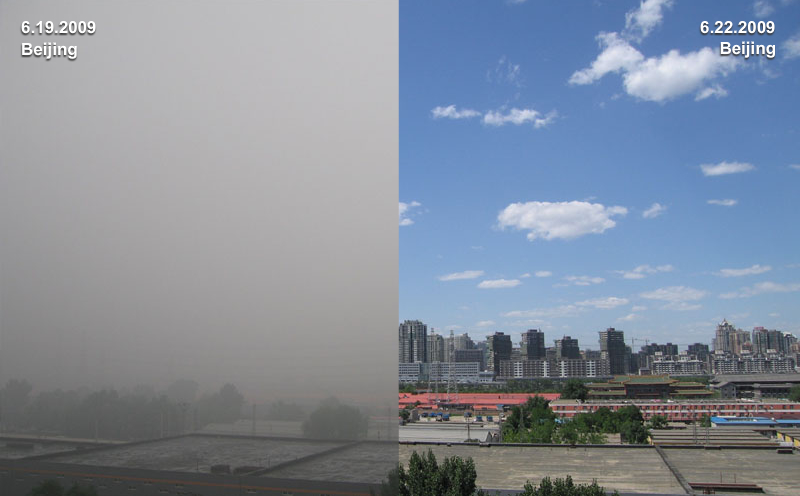 China Air Daily, a project of Asia Society's Center on U.S.-China Relations, provides a photographic chronicle of the air quality over Beijing, Shanghai, Guangzhou, and other international cities.

Speaking last week at Asia Society’s New York headquarters, Caroline Atkinson, a top international economics advisor to President Obama, commented that the U.S. has made it a priority to collaborate with China, India, and other Asian countries on tackling the major drivers of climate change. In this post, Junjie Zhang, Assistant Professor of Environmental Economics at the University of California San Diego and Senior Fellow of the Asia Society Policy Institute, explores the opportunity for the U.S. and China to mitigate climate change and create other social benefits by collaborating to reduce air pollution.

The U.S. and China, the world’s two largest emitters of greenhouse gases (GHGs), are seeking common ground for climate action. During his China trip in February, Secretary of State John Kerry signed the U.S.-China Joint Statement on Climate Change, which pledges to devote resources to “secure concrete results” by the 2014 U.S.-China Strategic & Economic Dialogue. While there is no shortage of ideas about what the bilateral climate collaboration might address, the challenge is to identify a focal issue that is economically beneficial and politically viable for both countries.

Neither China nor the U.S. has shown a willingness to take measures that will reduce GHG emissions if there are economic costs attached. On the Chinese side, GDP growth remains a top priority, and political leaders are reluctant to sacrifice GDP growth in order to reduce GHG emissions. In addition, GHG emissions are not a known indicator in China’s cadre performance appraisal system, which partly determines the career advancement of government officials. Such officials have no immediate incentive to make decisions aimed at limiting carbon emissions. In the United States, proposed laws and regulations to limit GHG emissions or put a price on carbon have repeatedly been turned back because of concerns over their impact on the economy.

Cooperation on climate change is most likely to occur in an area associated with positive economic, health, and social impacts. The nexus between climate change and air pollution represents an area in which the U.S. and China can create a host of benefits that should appeal to leaders and key constituencies.

Air pollution and climate change are closely related in several important ways. Many economic activities produce harmful air contaminants and GHGs together. Policies that promote clean energy and energy efficiency can result in the abatement of both local air pollutants and GHGs. The U.S. experience of regulating GHGs under the Clean Air Act has demonstrated that the pollution reduction measures are compatible with climate change mitigation. It has also shown that regulating air pollution does not necessarily slow economic development.

Positive outcomes like these should appeal to Chinese political leaders who are being challenged to confront air pollution as a critical environmental and public health concern. According to a study by the Asia Development Bank, less than 1% of the largest Chinese cities meet the air quality standards recommended by the World Health Organization. Severe air pollution has upset Chinese citizens and endangered social stability. Moreover, air pollution has real economic costs: the World Bank estimates that the health costs stemming from air pollution are between 1.2% and 3.8% of GDP. These matters should be worrisome to China’s government officials and Communist party leaders – and in fact, some recent policy changes have signaled the government’s interest in reducing air pollution.

After a series of "airpocalypse" events in the last year, China started to tighten its national ambient air quality standards and instituted a “National Action Plan on Air Pollution Control.” The plan proposes to use air quality as an indicator for the promotion of government officials. Cities with the best and worst air quality are disclosed publicly on a monthly basis. The prospect for career advancement and the "name-and-shame" mechanism have motivated provincial and local government officials to take actions that will improve air quality.

Chinese policy makers have also realized the importance of the linkage between air pollution and climate change. At the Warsaw Climate Change Conference in November 2013, Xie Zhenhua, China's top climate change negotiator stressed the strategy of using air pollution control to slow down GHG emissions. The climate change-air pollution nexus is also becoming central to the U.S.-China climate cooperation. During a trip to China in December 2013, U.S. Environmental Protection Agency Administrator Gina McCarthy called for the U.S. and China to cooperate on air and climate pollution. Earlier in the year, the U.S.-China Climate Change Working Group identified five action initiatives, many of which address GHG emissions and air pollution simultaneously.

One possible starting point for meaningful joint mitigation efforts is the issue of short-lived climate pollutants (SLCPs). China and the U.S. are major emitters of these pollutants, which include black carbon, surface ozone, methane, and hydrofluorocarbons (HFCs) and are responsible for about one-third of global warming to date. The cost of reducing SLCP emissions is low because the technology is cheap, proven, and readily available. Moreover, reducing SLCPs emissions can deliver environmental and public health benefits in the short term. These considerations give both China and the U.S. a strong incentive to control SLCPs emissions, even before the climate benefits are taken into account.

Political differences could get in the way of efforts by China and the U.S. to lower their SLCP emissions. Notably, China is skeptical of the Climate and Clean Air Coalition (CCAC) partnership to reduce SLCP emissions, which the U.S. Department of State initiated in 2012 and is now administered by the U.N. Environment Programme. It sees the program as a distraction from forming an international agreement on carbon abatement and would prefer not to join a program that exists apart from the U.N. Framework Convention on Climate Change (UNFCCC). The U.S., however, is eager to move forward with climate efforts outside the UNFCCC, for it regards the UNFCCC negotiating process as inefficient.

Rather than press China to join the CCAC, the U.S. should seek to engage China in reducing SLCP emissions on a bilateral basis. The U.S. and China might start with joint pilot projects even as they continue seeking a comprehensive climate deal. Plenty of potential projects exist: reducing diesel emissions from transport vehicles, lowering emissions from burning biomass and raw coal in rural areas, and reducing methane emissions from agriculture, natural gas transmission, landfills, and wastewater treatment. Good results from China-U.S. pilot projects would help to build mutual trust and demonstrate a shared willingness to cooperate on climate change, while providing a proof-of-concept that might clear the way to continued collaboration.