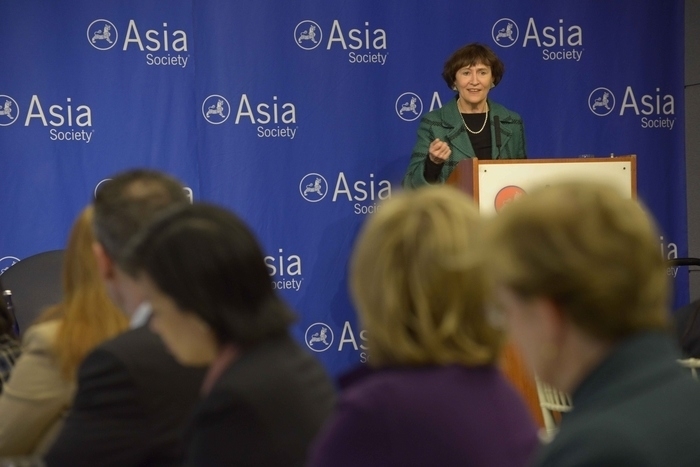 Speaking to the Asia Society Policy Institute Thursday, Caroline Atkinson, President Obama’s leading advisor on international economics, described a global economy in which the United States is encouraging Asian countries to adopt domestic and international policies that will strengthen their economies and power continued growth worldwide.

“In today’s world, where demand is still falling short and there are still too many people without a job, it’s important that we all do what we can to support near-term growth. Some countries in Asia have more room than others,” said Atkinson, who is U.S. Deputy National Security Advisor for International Economics.

“The good news is that we see many countries across the continent increasingly focused on the need for more balanced economic policies, including a greater willingness to let market signals operate,” she said.

Atkinson cited a variety of efforts by China, Korea, Japan, and ASEAN countries to stimulate and reform their economies. She also highlighted the potential for additional changes in their international economic policies to strengthen cooperation and spur growth.

“[In China,] the changes required are very significant and they require difficult policy moves in areas such as the exchange rate, which is still too constrained, to fiscal and monetary policies which need to shift to give more support to household consumption, to reform of state owned enterprises and strengthening of social safety nets so that Chinese households feel free to spend more and save less,” Atkinson said.

Noting that household consumption in China fell from 44% of GDP to 36% over the last decade, Atkinson voiced approval of China’s “overall goal of reorienting the economy to spur more domestic demand and more consumption, with less reliance on exports and investment.”

Atkinson mentioned signals of a similar shift by South Korea, where President Park Geun-hye recently announced her intention to shift the economy toward domestic demand. In Japan, Atkinson warned that the government must maintain a fiscal policy that stimulates growth enough to offset the economic slowdown that could result from the forthcoming increase in the country’s consumption tax.

“It’s essential that Japan moves forward toward structural reforms,” Atkinson said. “The Trans-Pacific Partnership can be a very powerful tool for provoking and promoting [structural reforms], if the government is willing to take the difficult decision to reduce long held protections and expand market access.”

Similarly, Atkinson said, ASEAN countries ought to promote structural reforms geared to facilitating trade and investment. ASEAN countries should also make it a priority to secure more financing for infrastructure—a need that these countries have in common with the United States.

“Our economic security depends on our ability to draw foreign investment from around the world,” Atkinson said. She cited SelectUSA, the U.S. government’s multi-agency program for attracting foreign investment, as “a conscious effort to communicate our goals, that we welcome who can create jobs here, and break down barriers.”

Atkinson stressed the need for countries in Asia to endorse institutions such as the International Monetary Fund and to abide by international rules and norms governing economic and trade policy. She pointed to the ongoing negotiations over the Trans-Pacific Partnership as an example of greater cooperation and harmonization of trade practices.

“This is not just a business-as-usual trade agreement. The rules we establish through this agreement will help lay the groundwork for others. [It is] a critical part of the administration’s broader effort to ensure that we can compete successfully in world markets where state owned enterprises need to compete fairly with private firms,” Atkinson said.

“We need to have intellectual property rights protected, labor and environmental standards enforced, agricultural and industrial regulations based on science, and transparent rules and regulations applied without discrimination.”