The 'Visionary' Women Critical to a Unified Myanmar 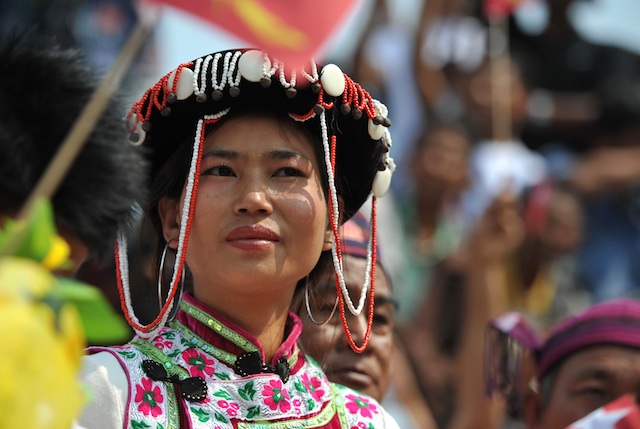 A Kachin tribe woman listens to Aung San Suu Kyi in the town of Moe Kaung on February 23, 2010. (Soe Than Win/Getty Images)

In the past two weeks, the U.S.-Myanmar (also known as Burma) relationship has reached a new high point with both President Thein Sein's visit on the occasion of the annual United Nations General Assembly and Nobel Peace Laureate Aung San Suu Kyi's first visit of the United States after four decades. The two Myanmar leaders, one representing the government and the other representing the major opposition party, the National League for Democracy, drew much attention to Myanmar's future and the nature of U.S.-Myanmar relations.

Since Secretary Clinton's historic visit to Myanmar in late 2011and many governments’ policies of suspending economic and diplomatic restrictions, including the European Union’s, the poverty-stricken country once ruled by military strong men has been "open for business" to all. The international development and business communities are taking a fresh look at new opportunities to increase their presence in the country, though efforts have been somewhat stymied due to a lack of infrastructure, expertise, and rule of law. Success in these areas lies in harnessing local knowledge and expertise to build the country from bottom up. Women's groups are uniquely positioned to fill that need.

Women's movements quietly grew on the Thai-Myanmar border when most of their leaders, of various ethnic backgrounds, fled the country because of the military's harsh crackdown on the student democracy movement in 1988. Despite the prsence of a number of political leaders on the border, ethnic women could not find a place in political discussions about Myanmar's future. Not only was the voice of women neglected, the voice of ethnic minorities was also often ignored in the political process.

Recognizing the need for a unified voice, ethnic women's groups came together and formed the Women's League of Burma, which is an umbrella organization of 13 women's NGOs representing major ethnic minorities. They set out the vision to pursue gender equality through advocacy. Throughout the years, they have trained many young Myanmar refugee women to be the voice of Myanmar at international forums. They learned how to raise international funding to support programs such as youth schools, human rights education, and foreign affairs classes to build capacity in future leaders. They learned how to document and advocate on behalf of victims of military-perpetrated human rights violations at the United Nations, before the media, and with Western leaders. And they learned to practice democracy within their own communities and organizations. They are a group of impressive, disciplined, and visionary women who, now more than ever, are critical to Myanmar's future. Their skills, experiences, and knowledge need to be shared with their sisters and brothers inside Myanmar.

With the recent positive developments in Myanmar, the international community is gradually shifting its focus and resources from the border area to the country. There is a concern that women's groups on the border might no longer play a significant role in building Myanmar's future. One solution is to increase support to connect these groups to ones inside the country to ensure further capacity building across borders. Resources can go to support programs that bridge women regardless of their ethnicity or location. If a strong women's network can be built to identify the common ground for Myanmar's future, it would be a significant step towards Myanmar's national reconciliation.