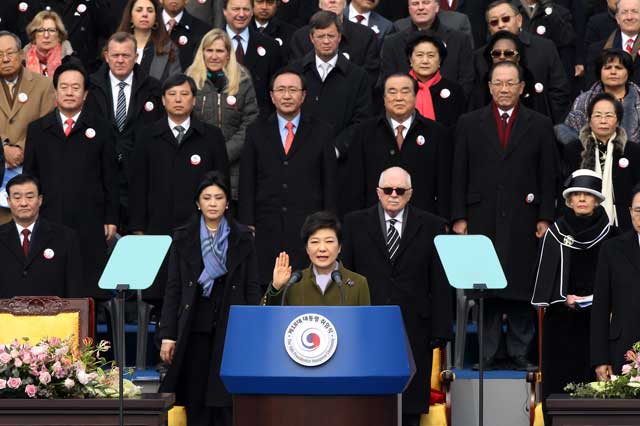 Vowing to usher in a fresh economic "miracle" and "an era of harmonious unification" on the Korean Peninsula, Park Geun-hye took the oath of office today, becoming South Korea's 11th president and the first woman to hold the office.

"The tasks we face today are unlike any we have confronted before," Park said, referring to the twin challenges of a slowing economy and fresh security threats from North Korea. "But I have faith in the Korean people."

An estimated 70,000 well-wishers jammed the plaza outside the National Assembly to watch Park take the oath of office. She bowed and waved to the crowd, and then urged the nation to pursue a "Second Miracle on the Han River," a nod to the economic "miracle" her father set in motion more than three decades ago. Park is the daughter of Park Chung-hee, the strongman who ruled South Korea for 17 years until his assassination in 1979.

The 61-year-old Park is making an emotionally charged return to the Blue House, as the presidential palace here is known. Blue House was her home as a teenager; she left 34 years ago, after her father was killed. Her mother had been assassinated just five years earlier, ushering in an unprecedented period when the president's daughter served also as first lady. "Consider her roles," said the South Korean author Suki Kim. "Daughter, first lady, and now mother to the nation."

While Park makes history, her ascendance has also brought unavoidable reminders of another era — her father's. "It's a walk down memory lane," Suki Kim said. Park Geun-hye's narrow victory — she won by a 51-48 margin — exposed fault lines over how her father is remembered: as a ruthless leader who brutally crushed dissent; or a man who took a developing nation and began building the economic juggernaut that South Korea has become. In the December election, elderly voters voted overwhelmingly for Park Geun-hye — in part because they hold the more charitable view of her father. She fared poorly among under-50 Koreans.

Park takes power with large-scale challenges in her inbox. A country sometimes described as a "shrimp among whales" has had trouble with the "whales" lately. Japan and South Korea have tangled over islands in the Pacific, China's rhetoric vis-à-vis the South China Sea is rattling the entire region, and of course no leadership change here passes without angst over North Korea, which conducted a large-scale nuclear test on February 12 and is threatening more of the same.

As a candidate and president-elect, Park Geun-hye straddled the North Korea question. On one hand, she has promised to "open a new era" on the peninsula, defined by "trustpolitik," an approach that would restore aid and cultural contacts in exchange for better behavior from the North. At the same time, she has taken a harsh line; in her inaugural speech, she blasted North Korea for its "self-imposed isolation." As for the recent nuclear test, she said "there should be no mistake that the biggest victim will be none other than North Korea itself." This combination of toughness and a new opening may prove difficult to reconcile.

It may be difficult, too, to balance her pledges regarding the economy. Park spoke of both an "economic rejuvenation" and "economic democratization," a pro-growth agenda and a buildup of welfare programs as well. "A new paradigm," Park said, "of tailored welfare (that) will free citizens from anxieties."

For today at least, there was elation and pride, and a pre-inaugural show that ran the gamut from traditional Korean music to the wildly popular singer-and-rapper Psy. The new president made reference to the "Korean Wave" of pop culture which has become an export that "triggers happiness and joy" — and certainly happiness and joy were evident in the crowd as Psy horse-danced across the stage and sang his monster hit "Gangnam Style."

Only a few minutes later the dancing was done, the Korean National Anthem was played, and South Korea had its new president.