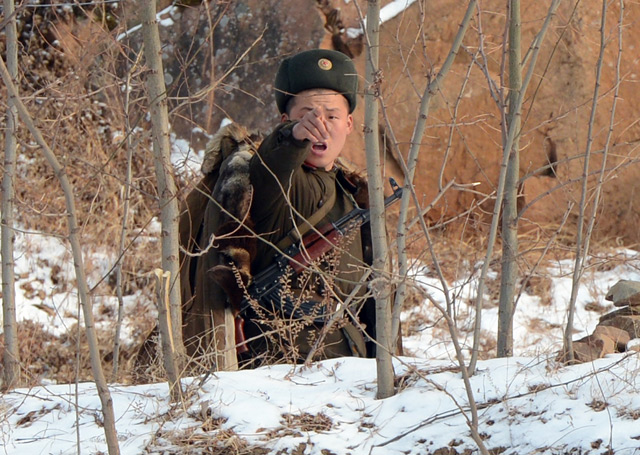 A North Korean soldier reacts as he patrols along the Yalu River, near the North Korean town of Sinuiju, after the country conducted its third nuclear test on February 12, 2013. (Mark Ralston/AFP/Getty Images)

Kim Jong Un had a brief moment this year to change North Korea's trajectory, to choose Google over guns. Instead of experimenting with greater connectivity to the outside world, North Korea has chosen a path of new sanctions, increased pressure from China, and the political impossibility of a negotiated "live and let live" agreement that could have traded nuclear progress for regime stability.

Today's nuclear test continues North Korea's policy of favoring a military-first policy over the needs of its people. This is perhaps not surprising, but it is disappointing.

Though the full impact of today's events will depend on yet-to-be-determined nature of the nuclear technology tested, taking the North Koreans at their initial word means that they sought progress in miniaturizing a nuclear warhead for use with the missile technology it has also recently tested. This growing capacity significantly raises the level of the perceived threat to the United States, Japan and South Korea.

There was another path. Some analysts saw last year some initial signs of attempts at economic opening. After all, the benefits of engagement are compelling. The country's GDP was about $40 billion in 2011. That year, Google's revenue was $37.9 billion. North Korea's leaders had to know that the great needs of their people would remain unmet and the limits on the North's economic potential would remain insurmountable, though, until it found a way to reintegrate with the international community.

But North Korea chose the other path. It was clear at least from January's United Nations Security Council resolution that North Korea could expect a harsh reaction to further nuclear testing. The benefits of an open economy are many, but they are not available to a belligerent North Korea.

Some analysts describe this test as a call from a predictable North Korean playbook — take provocative action, then negotiate from a position of perceived strength. But static playbooks don't age well, and repeated tactics often yield diminishing returns.

In this case, the international political landscape has shifted to erase any potential gains from a tactic that relies on provocation. New governments in Japan and South Korea are committed politically to significant action — Japan has already called for "quite severe" sanctions. A third nuclear test is likely to eliminate what little appetite there was in Washington for negotiations. And, a new Chinese leadership's credibility has been challenged by a nuclear test amid widespread reports that China's frustration with North Korea was growing.

Until today, the opportunity for a negotiated solution was still on the table. China had always favored a return to talks, and the American President had prominently committed to offer an open hand to those who would reciprocate. But, after this test, a new Agreed Framework — which delayed North Korea's nuclear program in return for energy — or a return to the 2005 agreement is no longer viable. Whether it was trust or hope bringing the international community to the table, North Korea has spent the last of it with this test.

Decisions over the next hours will determine the speed and depth of the measures the international community will take. But we already know the direction.

The most important debates will take place in Beijing. The question Chinese leaders must ask themselves now is whether a provocative North Korea in fact continues to serve Chinese interests. If the policy priorities for China in North Korea continue to be "no war, no instability, no nuclear weapons," it is not obvious that continued support for the current government is the best option.

In the United States, a crippling set of sanctions is likely being prepared. Once these sanctions are imposed, the way forward is more difficult to chart. First, the United States, China, Japan, South Korea and Russia should commission a study by high-level non-government experts on "the day after" a North Korean collapse, seeking ways these nations can act to allay each other's security, economic and other concerns. Such a study was previously impossible, but may now be viable. Second, it should negotiate with these four countries on a package of defined, escalating sanctions for further North Korean actions that threaten peace in the region, along with a generous package of assistance for steps North Korea takes to deescalate, implement its previous agreements and choose international engagement. This should be presented to, not negotiated with, North Korea. Finally, it should start a regional Proliferation Security Initiative dialogue on actions to prevent the spread of nuclear technology from North Korea, and urge Chinese participation.

In 2012, North Korea could have chosen to reconnect with the international community. It chose isolation for its government and want for its people.

What little hope there may have been for an economic opening, and for reforms modeled on China's, has been eliminated. One day, maybe this year, maybe a decade from now, North Korea will collapse under the weight of an unworkable system.