Our Picks From Around Asia: 'Unpresidented' Trump, Doctors in Nepal, Internet in Cambodia | Asia Society Skip to main content

Our Picks From Around Asia: 'Unpresidented' Trump, Doctors in Nepal, Internet in Cambodia 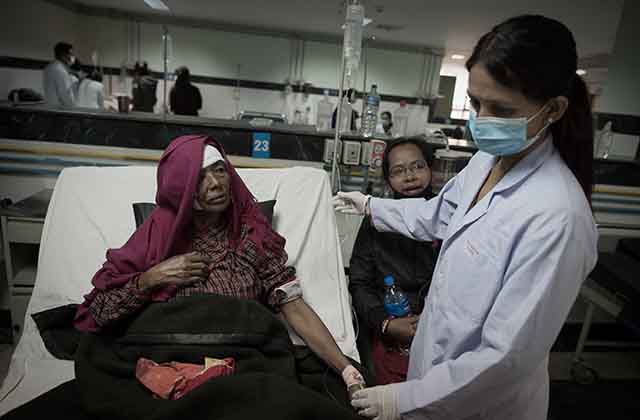 A Patient receives treatment at a hospital in Kathmandu on April 28, 2015. (Rakash Mathema/AFP/Getty)

Each week, we ask members of the Asia Society family to submit their favorite pieces of Asia-related content from around the web. Today, we look at the doctors who fall through the media cracks in Nepal, how the internet is shaking up Cambodian politics, and how Donald Trump's tweets are piercing China's "Great Firewall."

Hospital: The Story of How Dedicated Doctors Strive Valiantly to Save Lives in Remote Nepal

In his latest documentary Hospital, Kesang Tseten spotlights how dedicated doctors in remote parts of Nepal perform extraordinary feats against all odds to save the lives of ordinary people. While the prevailing media coverage on Nepal tends to focus on the dysfunctionality of the political process that continues to stymie growth and stability, Kesang has masterfully shared a powerful story of the amazing “invisible” work that is taking place on the ground, away from the media glare. Go »

The internet will define Cambodia’s future political landscape during the 2017-18 local and national elections. Its rising influence among the grassroots population has been fueled by the lack of independence within local newspaper and TV content and has become a major tool for political parties to influence younger generations. Leaders from both ruling and opposition parties have even created their own Facebook pages and entered a unique pre-election competition for the highest number of “likes.” Go »

In response to the recent seizure of a U.S. drone by the Chinese navy, Donald Trump tweeted, condemning the move as “unpresidented” (misspelling the word to universal amusement). Despite Twitter being blocked on the mainland, his message (and typo) were propelled into the Chinese internet. David Wertime, senior editor at Foreign Policy, describes how Trump’s tweets are penetrating the "Great Firewall of China," enraging Chinese nationalists, and provoking Chinese official newspapers and government representatives. Go »

Knicks fans like me may have mixed feelings about Stephon Marbury, but it's hard not to be moved by the one-time NBA star's story, and how he reinvented himself in China. After winning three Chinese Basketball Association titles, Marbury now has legendary status among Chinese basketball fans. There's even a statue of him in Beijing — perhaps a first for an African-American in China? Watch this ESPN video story to see how China may have saved Marbury's life. Go »