Opinion: Why Congress is Concerned About a Free Trade Deal with Asia | Asia Society Skip to main content

Opinion: Why Congress is Concerned About a Free Trade Deal with Asia 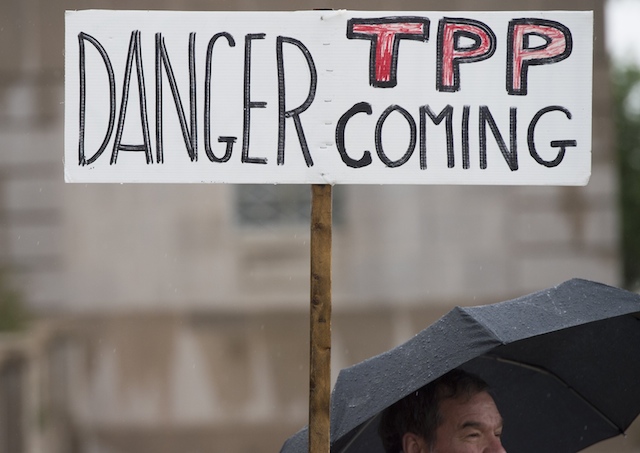 Demonstrators protest against the legislation to give US President Barack Obama fast-track authority to advance trade deals, including the Trans-Pacific Partnership (TPP), during a protest march on Capitol Hill in Washington, DC, May 21, 2015. (Saul Loeb/AFP/Getty Images)

Shom Sen was the 2014 Jack Wadsworth Fellow at the Asia Society. He previously served as Assistant Deputy Minister at the Ministry of International Trade in the Province of British Columbia, Canada. The views expressed are his own. This essay originally appeared in Fortune.

President Barack Obama suffered a big setback Friday in his bid to complete a Pacific trade deal, as opponents derailed a fast-track bill that would have paved the way for support of the Trans-Pacific Partnership. Although this is said to be the president’s signature trade deal, it’s not surprising that his own party went against his vision. Freer trade always seems to evoke ambivalent feelings.

Although 58% of Americans surveyed by Pew in May felt that free trade is good for the country, with few partisan differences, nearly 46% also believe that they lead to job losses and lower wages in the U.S. Early on, support was hard to come by. Many House Democrats felt that manufacturing jobs had taken a hit due to agreements, such as the North American Free Trade Agreement (NAFTA); they wished to build in added protections into future agreements. Senate Democrats raised a number of concerns about creation of the Trade Promotion Authority, which would have helped fast-tracked legislation for the massive trade deal involving 40% of the world’s economy, including the U.S., Japan, Australia, Canada and Mexico.

One concern had to do with currency manipulation, which is of particular concern for the auto industry. Debbie Stabenow (D-MI) noted during the Senate debate that currency manipulation can give foreign automakers a $6,000-$11,000 profit advantage per vehicle over U.S. ones.

Democrats also worried about potential job losses to countries such as Vietnam, Malaysia and Mexico, as was clear from the letter sent by 153 House Democrats to the U.S. Trade Representative on May 29.

Reportedly, 5 million manufacturing jobs have been lost in the U.S. since 2000, and some believe that job losses are due to pacts such as NAFTA. But what has been the real impact of the NAFTA agreement? As the Obama administration this week tries to save the deal and get some Democrats to reconsider, it’s worth bearing in mind that policymakers shouldn’t always be so quick to blame free trade for job losses.

The Economic Policy Institute found that 682,900 net jobs were lost to Mexico by 2010, and that 415,000 of these were in the manufacturing sector. For impacted industries, the job losses have been very painful. Mauro Guillen, a management professor at the University of Pennsylvania’s Wharton School of Business, believes, however, that even without NAFTA, these jobs would have gone to other countries. He notes that in 2013, the U.S. trade deficit with Mexico was $54 billion, while it was $318 billion with China, stating, “Maybe for every job we have lost in the U.S. to Mexico, five jobs were lost to China.” Some economists also argue that a portion of NAFTA-related job losses have been replaced by new export-related jobs, which pay 15% to 20% more than domestic production jobs.

In terms of the overall economic impact of NAFTA, while there have been winners and losers in particular sectors, U.S. trade with NAFTA partners actually more than tripled since the agreement’s adoption, reaching $1 trillion. While U.S. imports from Mexico increased from $39.9 billion in 1993 to $294.2 billion in 2014, U.S. exports to Mexico also increased from $41.6 billion in 1993 to $240.3 billion in 2014. In other words, trade gains weren’t completely lopsided.

Michael Robinet of IHS Automotive says, however, that the North American automotive supply chain actually became more competitive globally with the U.S., Canada, and Mexico each producing what was most efficient in the overall supply chain.

This brings us to questions about the Trans-Pacific Partnership’s economic impact, including jobs. A 2011 assessment of the TPP notes that there will continue to be a shift from manufacturing to service jobs for advanced economies such as the U.S. With manufacturing at the heart of Democratic support, and strong union pressure, there appeared to be little appetite for Democrats to support the deal.

Nonetheless, TPA, or fast-track, passed narrowly in the House with 219 votes in favor. Trade Adjustment Assistance (TAA), however, a program overwhelmingly supported by Democrats in the past to help workers displaced by shifts in trade was ironically defeated 302 to 126. These two pieces of legislation were passed as a ‘package’ in the Senate, and the lack of Democratic support for the TAA in the House meant that the overall package could not go forward.

As with the initial Senate vote, the loss was termed a “procedural snafu” by the White House, with the President urging House members to stand up for American workers and pass the TAA. The question remains whether President Obama will be able to muster support for a deal that promises potential economic growth, but with a risk of what Democrats fear: further erosion of the U.S. manufacturing base.