Opinion: What the Senate's Latest Vote Reveals About Its Stance on Trade | Asia Society Skip to main content

Opinion: What the Senate's Latest Vote Reveals About Its Stance on Trade 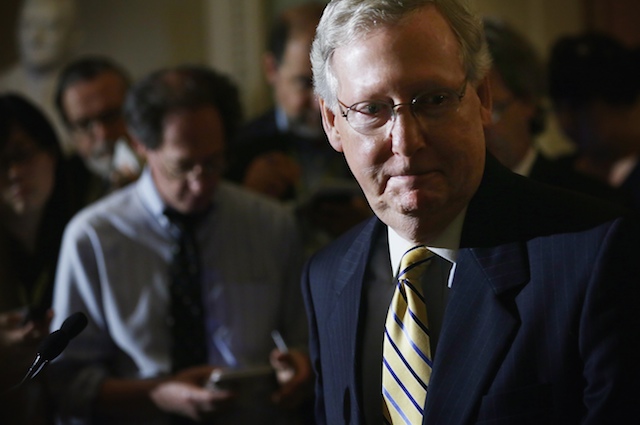 U.S. Senate Majority Leader Sen. Mitch McConnell (R-KY) turns away after a news conference at the Capitol May 19, 2015 in Washington, DC. The legislators held a news conference with small business owners from Ohio, Wisconsin and Kentucky to discuss trade and "the need for Trade Promotion Authority." (Alex Wong/Getty Images)

Shom Sen was the 2014 Jack Wadsworth Fellow at the Asia Society. He previously served as Assistant Deputy Minister at the Ministry of International Trade in the Province of British Columbia, Canada. The views expressed are his own.

When the U.S. Senate voted on Friday to lend its support to ‘fast track’ or Trade Promotion Authority (TPA), America’s trade partners no doubt exhaled a collective sigh of relief. TPA is widely seen as key to the successful conclusion of the Trans-Pacific Partnership (TPP), a proposed free trade agreement spanning 12 countries in the Asia Pacific and the Americas that account for nearly 40 percent of global GDP. TPA, if granted, would allow the White House to negotiate the agreement and bring it to Congress for a simple up or down vote without the possibility of last-minute amendments.

Before the vote, Senator Ron Wyden (D-OR) addressed many of the concerns around the TPP to reassure Senate colleagues. With regard to transparency, he said that the TPP document has to be public for 60 days. He added that labor and environmental rights will be enforceable. Finally, regarding Investor State Dispute Settlement (ISDS), he noted that in the past 3 decades, despite the U.S. being sued 17 times, the country has never lost or paid one dime in penalties.

The Senate vote means that President Barack Obama’s push to achieve a TPP agreement – the centerpiece of his ‘pivot to Asia’ foreign policy – is again alive and well just a week after it was nearly stopped in its tracks in the Senate. On May 12, a Senate motion to proceed with debate on the TPA was denied when it failed to meet the threshold of 60 votes, with Senate Democrats in resounding opposition.

Passage of those two bills made it possible for enough Senate Democrats to join their Republican counterparts in a May 14 vote to open debate on TPA/TAA, with the vote passing 65 to 33.

Democrats such as Senator Sherrod Brown (D-OH), unhappy with the exclusion of currency manipulation provisions from the main TPA bill, vowed to fight its final passage in the Senate. Critics have long voiced concerns that weak Chinese and Japanese currencies have resulted in major job losses in the U.S.

U.S. Treasury Secretary Jacob Lew, however, noted in April that the Department’s engagement with trading partners has been reaping results, saying “China’s exchange rate is up nearly 30 percent…since 2010, and Japan has not intervened in the foreign exchange market for more than three years.” He went on to note, “Seeking enforceable currency provisions would likely derail the conclusion of the TPP given the deep reservations held by our trading partners.”

The debate came to a head on Thursday, with another critical vote on TPA. Senator Orrin Hatch (R-UT) brought forward 12 amendments to try to achieve bi-partisan support and called for a vote to limit further debate on the TPA. It passed, 62 to 38.

This paved the way for the Senate’s final vote to finish the TPA bill on Friday. With sharply opposing views on issues such as currency manipulation and ISDS, several amendments were put to a vote including the Portman-Stabenow amendment which made the addressing of currency manipulation in trade agreements a principal negotiating objective for the U.S. The amendment was defeated, with the less restrictive Hatch alternative passing. The Warren ISDS amendment also failed to pass. The TPA was finally voted on, passing narrowly 62 to 37, with 14 Democrats in support.

Despite disagreements remaining on issues such as currency manipulation, the White House could take some comfort in the bill having passed its first major hurdle in the Senate. Now the attention shifts to the House of Representatives, where a bruising battle awaits.