Opinion: Behind the Latest Setback for Obama's Trade Agenda, and Why It's Surprising | Asia Society Skip to main content

Opinion: Behind the Latest Setback for Obama's Trade Agenda, and Why It's Surprising 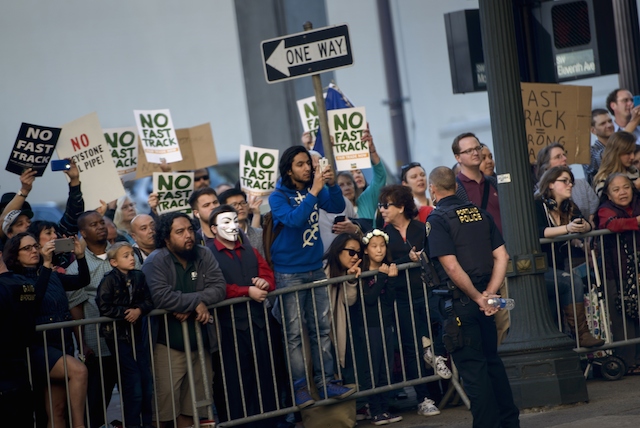 People protesting the Trans-Pacific Partnership (TPP) gather as US President Barack Obama attends a fundraiser for the Democratic National Committee at the Sentinel Hotel May 7, 2015 in Portland, Oregon. (Brendan Smialowski/AFP/Getty Images)

In this essay, which originally appeared in Fortune, Shom Sen considers what it will take for the 12 Trans-Pacific Partnership countries to reach a final agreement. Shom was the 2014 Jack Wadsworth Fellow at the Asia Society. He previously served as Assistant Deputy Minister at the Ministry of International Trade in the Province of British Columbia, Canada. The views expressed are his own.

On Tuesday, the U.S. Senate dealt President Obama a major setback in his drive to secure a massive trade deal spanning 11 countries across the Pacific Rim. With the Senate voting down a bill to consider granting the president accelerated power, or “fast track” authority, over legislation, the White House will have a much tougher time to reach a deal over the Trans-Pacific Partnership (TPP).

In many ways, the setback was surprising. Up until Tuesday, the White House appeared to be well on its way to winning fast track authority, with a series of developments in its favor. Just last week, Senate Majority Leader Mitch McConnell (R-KY) filed cloture on a motion to proceed to a bill to renew fast track Trade Promotion Authority (TPA). To increase the bill’s chances of success, it was augmented with Trade Adjustment Assistance (TAA) provisions to help workers who may lose jobs due to competition, which Democrats had been seeking. And in April, a bill to extend fast track authority passed key Senate and House committees.

The bill required support from 60 of 100 senators to bring a close to the debate. Democratic support was essential, but many have been unenthusiastic about the TPP, expressing concerns about the offshoring of U.S. jobs and dissatisfaction with the level of consultation. Democratic Senate Leader Harry Reid had consistently voiced his opposition, as did a number of influential senators, including Elizabeth Warren. President Obama countered concerns noting, “You’ve got some critics saying that any deal would be rushed through; it’s a secret deal. This is not true … There’s nothing fast-track about this. This is a very deliberate track.”

The president had been busy selling his vision for freer trade in the lead up to the vote. While hosting Japanese Prime Minister Shinzo Abe for a state visit to Washington in late April, he publicly highlighted the merits of the TPP. On May 8, he rolled out his message more broadly, making a speech at Nike headquarters in which he directly addressed concerns about outsourcing to countries like Vietnam, saying that “under this agreement, Vietnam would actually, for the first time, have to raise its labor standards.” At the same time, the president worked to rally support among Democrats, already having the support of Senate Republicans on the issue.

But the “all-hands-on-deck” effort exerted by the administration and Senate leadership wasn’t successful. Only 52 senators, including just one Democrat, voted in its favor. Senate Democrats emphasized that a customs bill with provisions regarding currency manipulation also needed to be coupled with the TPA. The Senate majority leader responded that the Senate Finance Committee had chosen to handle that sensitive bill separately, rather than folding it into the TPA bill, as the latter approach would likely be vetoed by the president.

In his remarks after the vote, Senator McConnell said pointedly that Senate Democrats had shut down the president’s top economic priority. At the same time, he said “this doesn’t have to be the end of the story” and moved to reconsider the bill and go forward on a bipartisan basis.

It remains to be seen what amendments will be made before a future vote takes place. For America’s TPP negotiating partners, what may resonate most was McConnell’s comment that “other countries are taking a look at us — wondering if we can deliver.”